These lizards use built-in ‘scuba gear’ to breathe underwater 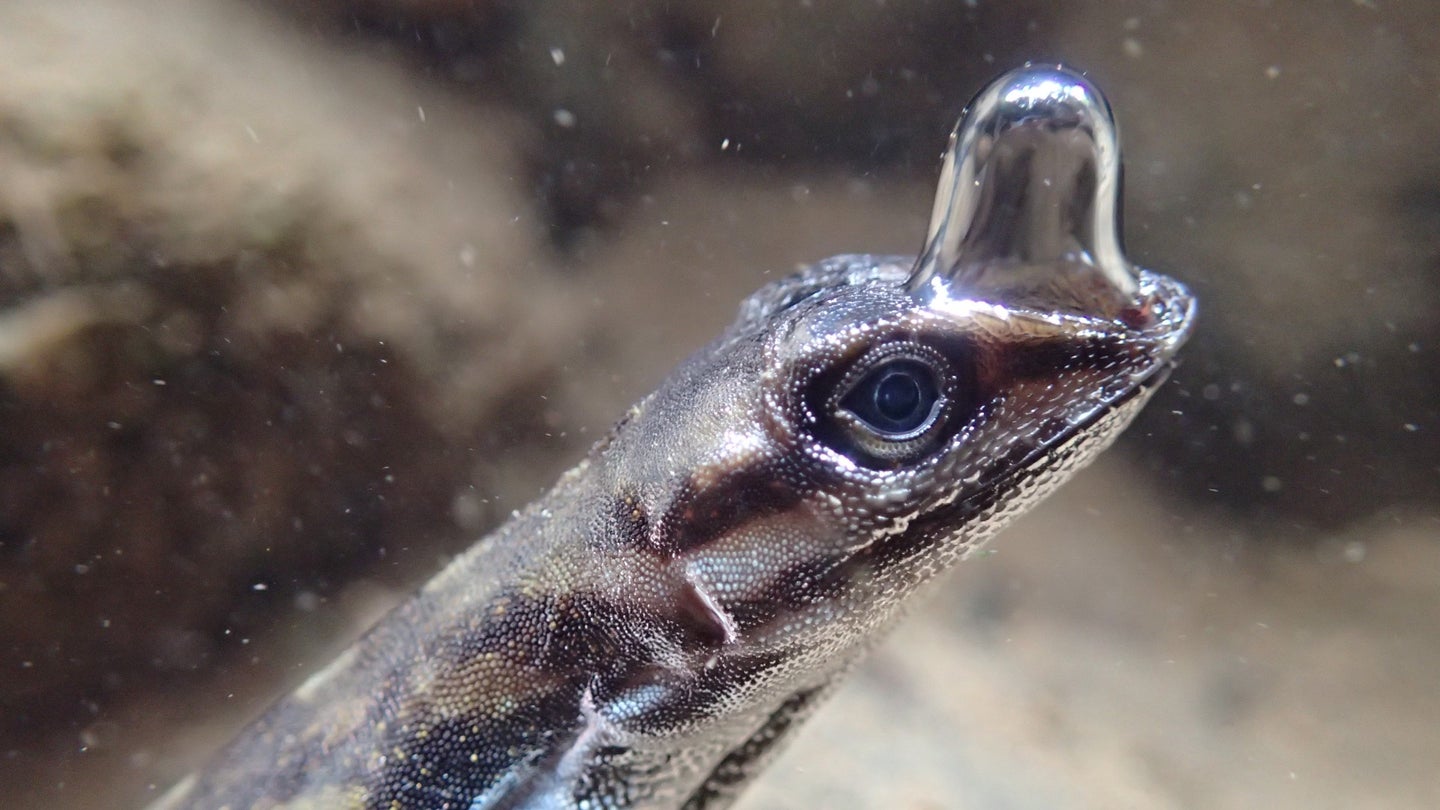 Anoles have their own form of 'scuba gear,' a bubble on the nose that allows them to keep breathing underwater. Lindsey Swierk
SHARE

Confronted with the threat of a predator, semi-aquatic anoles—a type of lizard native to the Americas—will take a leap of faith, flinging themselves from rocks and diving into water. There, at the bottom of fast-flowing streams, they can stay submerged for up to 18 minutes, waiting till it’s safe to crawl back on land.

But how can lizards, whose lungs are developed for good ole air, manage to hold their breath for so long? Well it appears they don’t have to. According to a recent study conducted by evolutionary biologists at the University of Toronto, these water-loving reptiles employ their own form of scuba diving researchers aptly coined “rebreathing.” Previously, ecologists have only observed this technique in arthropods like spiders and bugs.

The study, which was published this month in Current Biology, found anoles have a unique ability to breathe underwater thanks to an air bubble sitting atop their snouts. With each inhale and exhale, the air bubble expands and contracts, like a pulsating balloon. This allows the lizards to suck in much-needed oxygen.

Through observations, the scientists discovered as soon as the lizard’s skin touched water, a submillimeter layer of air coated its body, allowing them to trap in oxygen. They refer to this as a “quicksilver lining.”

Luke Mahler, an assistant professor in the department of ecology and evolutionary biology at the University of Toronto whose lab led the project, said he first noticed this phenomenon fortuitously while on a 2009 trip to Haiti.

There in the remote northern mountains of the island is a critically endangered species of anole called Anolis eugenegrahami. Mahler, who was studying the rare subgroup, happened upon rebreathing when he gently tossed a specimen back into a clear, shallow section of the brook.

Fast forward to 2016, and a student of his at the time, Chris Boccia—the lead researcher of the project—went on a trip to Costa Rica to observe a distant relative of the Haitian lizard. Mahler asked him to keep an eye out for any sign of rebreathing. Sure enough, when dunked in water, Boccia saw the neighboring four-legged counterpart use a reservoir of air to stay submerged.

To prove the precariously perched drop of air was helping the lizards breathe, the researchers had to show the bubble’s oxygen saturation depleted over time. To do this, they carefully cradled captured anoles by hand and gently submerged them in tanks of water. Then, they aimed a specialized probe at the air bubble’s center to measure oxygen saturation.

“This is when having experience with a group of organisms comes in handy,” says Mahler. He’s been studying anoles for more than 10 years. “You wouldn’t think you would be able to just pick one up and dump it in a bucket, but if you handle them in a relaxed way they get comfortable.”

One of the most surprising discoveries of the project was that rebreathing wasn’t distinctive to the diving reptilians—it was universal in all anoles the study observed, including species not found near streams, and those endemic to Colombia, Mexico, the Dominican Republic, Jamaica, Ecuador, and Costa Rica.

However, the terrestrial-bound lizards weren’t as skilled when it came to rebreathing. This indicates the trait arose in an ancestral population for some other use, Mahler said, but was then tailored and specialized for those residing by small streams.

“[The quicksilver] coating of air we think probably arose for some other purpose unrelated to diving, but has now given [semi-aquatic species of anoles] the ability to exaggerate this rebreathing mechanism into something quite useful,” says Mahler, who believes field-based studies like this are essential in uncovering clues to how adaptive evolution works.

Not only does the discovery provide biologists insight into how evolution operates, but may offer some potential for future applications, Mahler says. Learning more about the surface properties of these underwater-breathing vertebrates’ skin, for example, could lead to new hydrophobic materials or films.

But that’s many years away. The next step for Mahler is understanding what causes the anoles’ slinky scales to repel water. He thinks it probably has to do with their structure, but there could be a chemical explanation.

“The biggest take home is this is just a pretty cool innovation that vertebrates have come up with that wasn’t really appreciated before,” Mahler says.