They can almost vanish—escaping predators and sneaking up on prey. 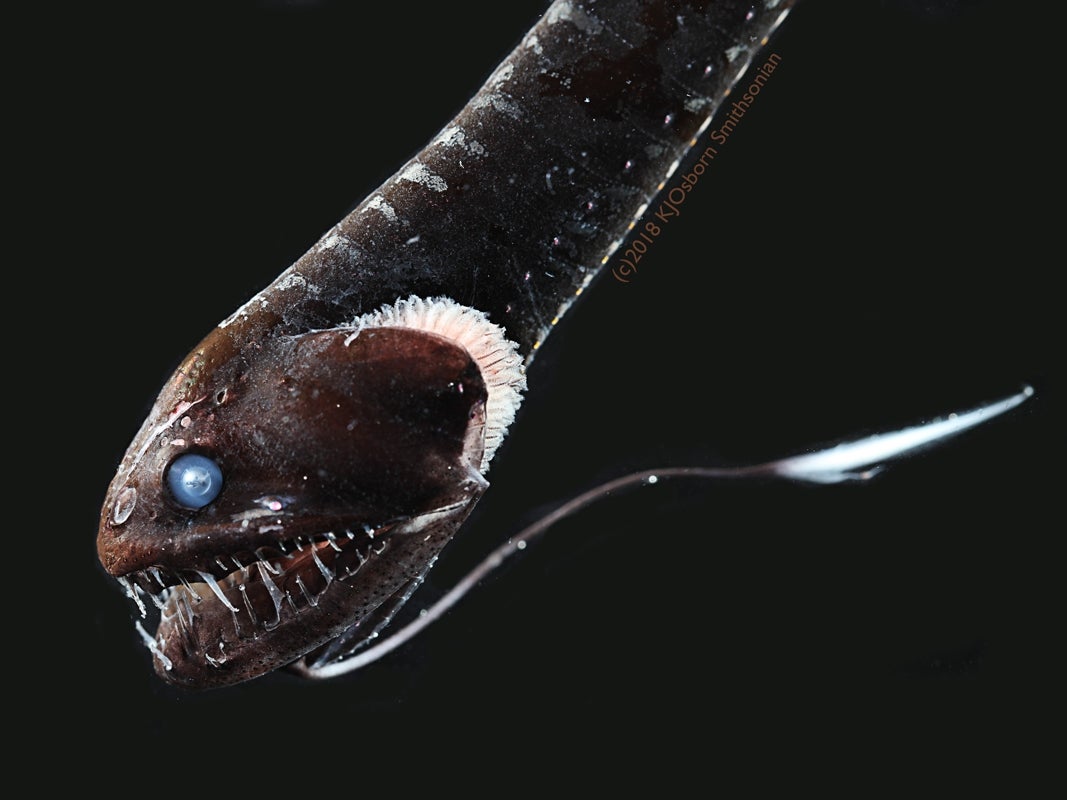 When we think of deep ocean creatures adapting to the dark, bioluminescent jellyfish or the glowy lures of an anglerfish come to mind. But other deep sea animals have adapted in the other direction, evolving skin that acts almost like a black hole, sucking in nearly all the light around it and reflecting very little, allowing the animals to blend in completely with the dark.

In new research published in Current Biology on Thursday, scientists looked at 16 species of deep sea animals that can absorb more than 99.5 percent of visible light directed at them, making them some of the blackest known animals. They found that even though these 16 species were diverse, and some very distantly related, they all had dense pigmentation in their skin cells structured to both scatter and absorb light.

“Most of these fish are a few inches to maybe the size of your hand,” says Karen Osborne, a zoologist at the Smithsonian National Museum of Natural History and one of the senior authors of the paper. “Looking at them, they’re just velvety smooth looking, inky black, and it’s very hard to see any details on them. It’s really pretty cool.”

Osborne, who routinely photographs the specimens she comes across on her research cruises, became interested in these fish in 2014 when she struggled to capture their dark skin on camera. “It’s nearly impossible to get good photographs of these really black deep sea fish. They seem to suck up all the light no matter how you set up your flashes or camera settings,” she says.

While these fish skins are not as black as manmade materials like Vantablack (which absorbs 99.965 percent of all light), it’s certainly a wonder that these animals can organically produce cells that are almost unnaturally dark, says Alexander Davis, a graduate student at Duke University who co-authored the paper and worked on modeling skin cell structures.

This ultra-blackness is almost certainly a camouflage tactic, allowing fish to hide from both predators and prey. But in the almost total darkness of the deep sea, where there is so little visibility, why bother with camouflage?

“In a pitch black ocean, you don’t have to worry necessarily about light from the sun,” says Davis, “but you do have to worry about animals that have searchlights, or little photophores on their heads that shine out and help hunt for prey, or species of prey that may spew out bioluminescent liquid to try and mark you.” Capturing those stray beams of light and hiding them away helps these fish escape becoming dinner—and helps them sneak up on dinner.

But while the ability to hide from predators and prey is an undoubtedly valuable trait, skin that absorbs 99.5 percent of all light seems pretty extreme. The team wanted to find out the value of ultra-black versus simply black skin in fishes’ abilities to evade detection. Using a computational model, they found that fish with 2 percent light reflectivity could be spotted from twice as far as a fish with just 0.5 percent reflectivity.

“Most of these ultra-dark fish are not related to each other, and yet they’ve arrived at the same solution, camouflaging themselves this way,” says Osborne. “There’s slight variations in how they do it, but basically it’s all the same strategy—it’s a beautiful example of convergent evolution.”

These traits born of convergent evolution, when two unrelated animals develop similar adaptations, function similarly even at a microscopic level, she explains. Their skin tends to look very different from those of other fish—their melanin is densely packed into a super thin layer of cells near the very outside of the skin. It’s a pretty unusual structure, since most fish have several dermal layers above and below their layer of pigmentation.

These pigmented skin cells are called melanosomes, and somehow these fish have evolved so that their melanosomes can simultaneously scatter and capture light, says Davis—”It’s the combination of those two phenomena that makes them so black.”

Ultra-black fish melanosomes could be the inspiration for new, synthetic black materials, Davis says. The structure of those pigmented cells has already inspired other scientists to play around with synthetic melanin particles. The current blackest man-made black materials are all made of carbon nanotubes, which are extremely difficult to construct. But this line of nature-inspired research could yield new materials that could potentially be used in optical equipment. Instruments like cameras and telescopes often rely on uber-dark materials to capture stray light and minimize unnecessary signals.

The fact that these fish are so much darker than so many of our man-made materials just shows how much we still have to learn from nature, and how animals are still capable of things we barely understand. And that’s the beauty of ocean fieldwork, says Osborne: “you never know what you’re going to find.”