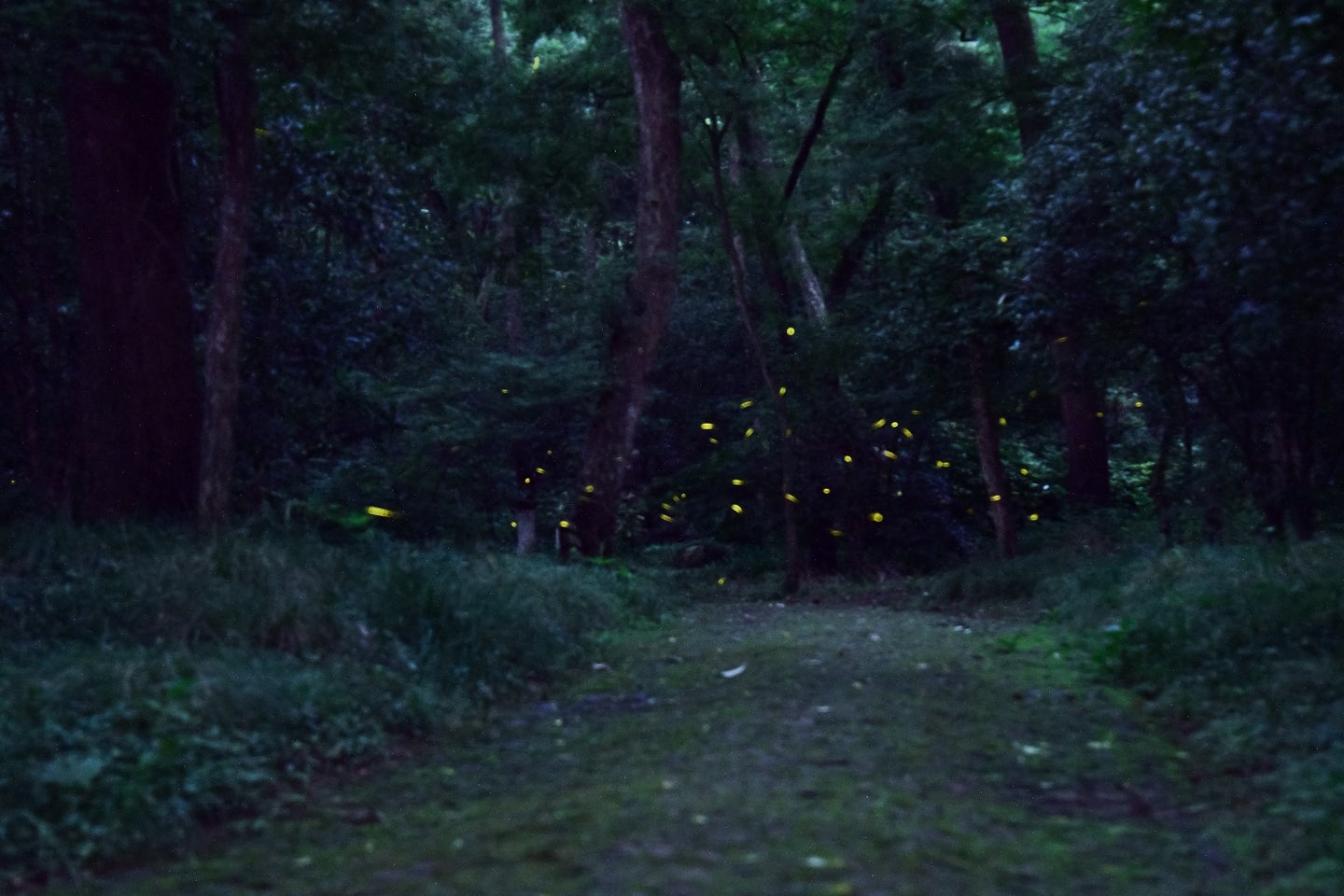 Most people could be convinced to check out a summer firefly display in their backyard or in a park in the street. But what if we told you that for the best displays, you'd have to go mucking through a bog at night?. Costfoto/Future Publishing via Getty Images
SHARE

As entomologists around the world raise the alarm about the loss of insects, one firefly fanatic in the Mid-Atlantic has made an unexpected discovery: four new species of bioluminescent beetles.

These particular lightning bugs, all in the Photuris genus, may have long escaped detection because no one was really looking for them. Few people spend their free summer nights cataloging minute differences in firefly flashing patterns. But Delaware State University wildlife ecologist Christopher “Kitt” Heckscher treks out a few times during the season, seeking out the perfect wetland wilderness for the hypnotizing insects.

Among firefly experts, Heckscher is something of an outlier, targeting what he believes will be the fireflies’ favored landscapes in hopes of discovering new species. The blinking beetles rely on specific habitats and geographic ranges that offer moisture across all stages of the bug’s life cycle. Land surrounding bodies of water, including bogs and marshes, are critical to their survival.

As dusk set over one such wetland on a warm June day, Heckscher geared up for his first search of the season. He pulled out a compass to mark the spot where he would enter a wooded area on the edge of the pine barrens in coastal New Jersey. He had first heard of this site years ago from other local insect enthusiasts, who said that this isolated acidic bog within the Millville Wildlife Management Area would be a perfect place to find fireflies. Perhaps he’d even make another unprecedented discovery.

A single greenish-yellow flash signaled from the brush in the peatland. Then another. And another. Several flew by with their light stuck on—a relatively common behavior among the world’s 2,000-plus firefly species that scientists have no clue how to interpret. The darker the sky became, the more the light show picked up, but most of the beetles were out of Heckscher’s net’s reach, including one that glimmered with a trembling pattern he’d never seen before. As he walked back to his car, he wondered if he’d just spotted another undescribed species. He’ll have to return to try to catch it.

Heckscher left this new site with six specimens: a single Photinus firefly found closer to the roadway and five fireflies of two different Photuris species, neither of which have ever been found in New Jersey before, as far as Heckscher was aware. In fact, Heckscher himself had first discovered one of those species in similar swamp forests in Delaware, on the other side of the bay.

All five of the firefly species Heckscher has found—the four announced late last year and another he identified nearly a decade ago—rely on particular wetland habitats in Delaware, New Jersey, and New York. He’s not sure why the insects are restricted to these environments, but suspects they “have adapted to the precise chemical and physical environmental parameters” that could include soil pH levels or specific types of vegetation.

It had been known that some lightning bugs need hyper-specific habitats, such as the Bethany Beach fireflies that dwell only in small freshwater wetlands, known as interdunal swales, along Delaware and Maryland’s coasts. The fireflies Heckscher collected, meanwhile, are found only in acidic peatland floodplains. “That hasn’t been suggested for this particular group before,” he said. But further research is needed to figure out exactly why these species are restricted to certain wetlands, and whether it’s some specific chemical balance in the soil or simply the temperature of the muck.

Photuris fireflies act and look slightly differently from the glowing beetles found in grassy American backyards. But all fireflies depend on some level of moisture or humidity, whether that’s the muck of a New Jersey peatland or the wet leaf litter in a neighbor’s backyard.

[Related: Firefly tourism has a surprising dark side]

“You don’t even know what you’re protecting when you leave your leaves down,” says Lori Ann Burd with the Center for Biological Diversity, a proponent for people not raking their yards in the fall. “The amount we don’t know is truly remarkable,” she adds, and species can “blink out in the time it takes for us to learn everything.”

The habitats where Heckscher has found new species are of high ecological quality, meaning the wetlands are not impacted by pollution, artificial light, encroaching development, or other damaging human activities such as damming.

As climate change threatens to bring drier or wetter conditions to these wetlands, depending on the future impacts, it is also expected to change air, water, and land temperatures. Since experts still don’t know what conditions influence firefly survival success the most, Heckscher makes sure to collect temperature data, including that of the spongy soil in case it might be relevant to future studies. “If we come back in 20 years and the temperature is like 82 [degrees Fahrenheit] in the peat and the fireflies are gone, well, maybe that’s one of the things that triggered the extinction,” he said during the pine barrens hunt.

As to what exactly these fireflies are looking for in these habitats, that may all depend on the specific species’ needs, Hecksher explained.

These mysteries, and the fact that he now knows undiscovered species can still exist in even the most developed American states, are what got Heckscher hooked on this research in the first place, back in the late 1990s.

“A lot of research to date has really focused on their bioluminescence and courtship and signaling and that flashy behavioral stuff that’s really exciting,” says Candace Fallon, a senior conservation biologist with the Xerces Society for Invertebrate Conservation. Few firefly experts are thoroughly identifying species and the details of their local habitats, she adds, as Heckscher is.

“It’s awesome because we have so much more information about fireflies in that area than others,” Fallon says. “It also makes me nervous because if we had someone like Kitt in other regions, would there be more threatened species because we knew more?”

The charismatic beetles spend most of their lives secretly, living for years as little-studied larvae within moist soil or organic litter. Their time spent flying and blinking is, on average, just a matter of weeks.

But because their bioluminescence is the main draw for scientific study—and, most importantly for working researchers, available funding—the lesser-known larval forms and basic life history are woefully understudied. For many species of fireflies, there’s no record of what they look like, what they do, where they live, or even what they eat. That’s why Heckscher continues searching, even though he doesn’t have any dedicated money for these efforts.

“It’s a mission that’s never gone away, one that I have to figure out,” he said on that firefly-filled night in June. “Look at how much money we’re putting into exploring Mars, searching for life on Mars, when we don’t even know what the heck is in a New Jersey bog.”