How to turn used plastic bottles into skylights and street lamps

Let the sunshine in 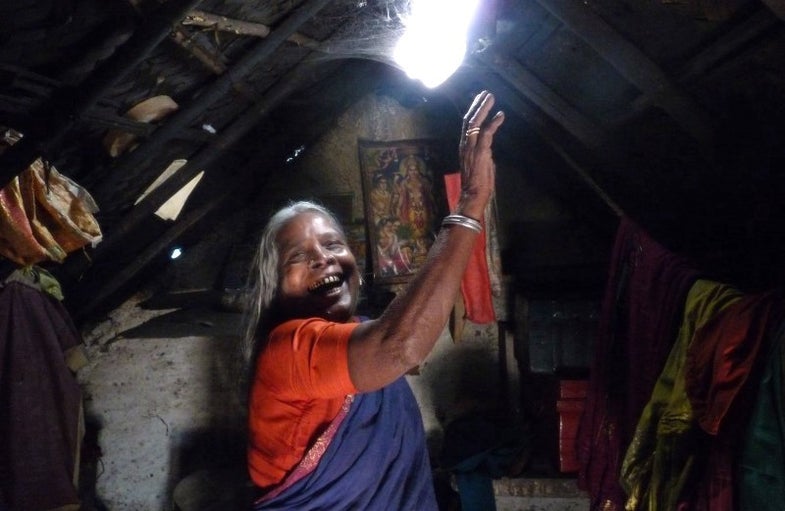 A woman enjoys natural light refracted by water in a bottle. Liter of Light
SHARE

In 1880, Thomas Edison patented a lightbulb made from a glass tube and cotton thread filament. It was crude in its design, but it worked, and within a few years the Edison Lamp was a fixture of sitting rooms across America.

In 2002, Brazilian mechanic Alfred Moser had his own eureka moment involving an old Coke bottle and a spoonful of bleach. His makeshift lightbulb is now illuminating homes across the developing world.

You can make one yourself at home: just fill a translucent bottle with water, add a splash of bleach to prevent algae from growing in the bottle, and cut a hole in your roof—then slip the bottle through the opening. Make sure you seal up any cracks to prevent the roof from leaking, and let the sun shine in.

The water in the bottle refracts sunshine, allowing the homespun skylight to glow as brightly as a typical incandescent bulb — but at a fraction of the cost and without using electricity. In many parts of the world, families live in densely-packed, windowless homes with corrugated iron roofs and no access to power. Moser’s invention can light up these homes during the day, allowing men and women to work, cook, and even grow food indoors.

Filipino entrepreneur Illac Diaz has taken this idea and run with it. He operates a project called Liter of Light that teaches volunteers to make solar lights. So far, the the organization has installed around a half a million lights in more than a dozen countries, with the support of the U.S. State Department and PepsiCo.

Diaz comes from a family of celebrities — his aunt, Gloria Diaz, was the first Miss Universe to come from the Philippines. Illac Diaz spent a few years in the family business, working as a model and actor, before enrolling in grad school at MIT and Harvard to study urban planning and public policy. Shortly thereafter, he started Liter of Light.

The first test for the organization came after Typhoon Haiyan. Diaz installed solar lights in communities devastated by the storm, training volunteers to assemble the lights themselves. He sees self-sufficiency as the key to resilience.

“What if I am able to train an army of solar makers, solar engineers?” Diaz asked in a TEDx Talk. When disaster strikes, he explained, communities can fashion solar lights from donated parts or materials that are available locally. The plastic-bottle bulbs are safer than candles and cheaper than incandescent bulbs which, of course, require electricity.

Liter of Light also trains communities to make battery-powered lights that continue operating after dark. Assembly is a cinch: connect a small solar panel to an old battery, then use that battery to power a high-efficiency LED light. Put that LED in a plastic bottle, and voilà! You have a street lamp. Diaz reports a drop-off in crime where lamps have been installed.

Rising temperatures will deliver more storms like Typhoon Haiyan. Humans will need to be more resilient in the face of natural disasters. They will need to do more with less — produce more tools with fewer resources, and generate more light with less energy.