Insect-Like Robot Can Jump On Water

Jump! Go ahead an' jump 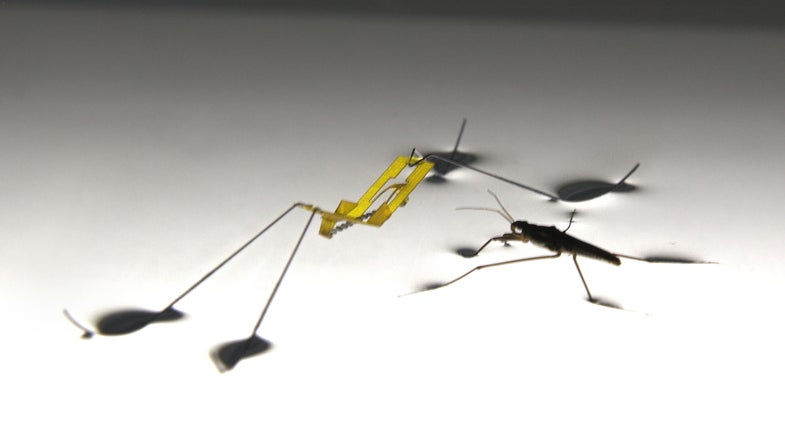 Since Biblical times, people have been fascinated with the idea of walking on water. Now researchers have built a robot that can jump on it.

In a study published today in Science, researchers from Seoul National University and Harvard University built an insect-sized robot that mimics the way that water striders, also known as “Jesus Bugs,” jump on the surface of a body of water.

The team collected water striders from a local pond, and used high-speed cameras to record the insects jumping on water in buckets in the laboratory. They noticed that the insects don’t simply push down on the water, but gradually accelerate their legs so as not to break the surface tension. The striders also sweep their legs inward before each jump, to maximize the amount of time they touch the surface, which increases the force of their pushes.

Using these principles, the researchers developed an ultra light robot with a 2 centimeter long body inspired by origami. Its 5 centimeter long wire legs are curved at the tips like a real water strider’s and coated with a material that repels water. A flea-inspired jumping system called a torque reversal catapult launches the robot from the surface of the water up to 14.2 centimeters in the air, which is similar to water striders. At the moment, the strider-bot can only jump once, and can’t land upright. But it’s still quite impressive.

“Looking at nature is a good starting point to improving robot systems because they have already optimized their behavior through millions of years of evolution,” says Je-sung Koh, co-lead author of the study.

Although Koh and his team were driven by the mere challenge of successfully building a robot that can jump on water, he said that they would like to build upon this design to develop a robot that can not only jump on the water, but that could also swim and perform other complex tasks. A future strider-bot might be used in swarms for environmental monitoring on rivers or oceans, for search and rescue in disaster areas, or even military surveillance, he says. However, other technologies would also have to be miniaturized and lightweight so that the robot’s weight could still be supported by water tension.

The first robot that was able to jump on water was built in 2012 by engineers at Harbin Institute of Technology in China. However, unlike the new tiny strider-bot, the older robot is six inches long and about 1,000 times as heavy. The older jumping robot also has a different design. It uses six paddle-like feet made out of water repellant nickel foam, which allows it to balance and float on the water, as well as hop 14 centimeters high and 14 inches forward.

Although many articles at the time compared it to a water strider, the hopping mechanism is closer to basilisk lizards, which don’t use surface tension, but rather water pressure that resists its motion as it pushes off the water with its feet.

Koh’s strider-bot is the first ever to use surface-tension dominated jumping like real water striders. The simple design of the robot also allows it to be made at relatively low cost.

“It was an amazing research experience for me,” Koh says, “We can make anything we can imagine in the world.”