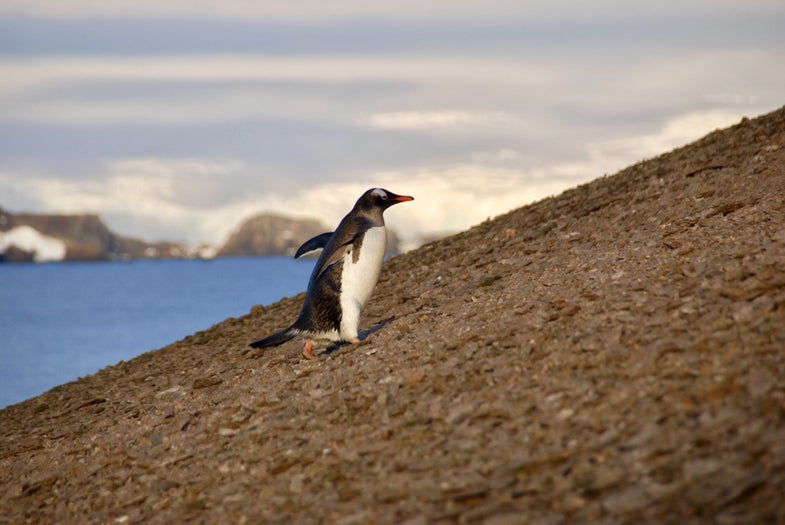 It should be said that Stephen Roberts, a researcher with the British Antarctic Survey, and his colleagues from several European universities—Germany’s Bremen University, the Polish Academy of Sciences, and Cardiff University, among others—did not set out to solve a mystery. Or at least, not one about the largest colonies of Gentoo penguins in Antarctica. But a new study released today in the journal Nature Communications suggests that they stumbled upon a real caper.

Roberts and company went to Antarctica to collect lake bed sediments, which give us regional insights into the historical impacts of climate change.

“We know the broader scale picture of past climate change, say the last 10 or 12,000 years on a global basis, based on a lot of the ice core records,” said Roberts. “But a lot of the impacts that might happen in certain places are kind of regional changes. Because we have a lot more lakes than ice sheets in a lot of areas, we’re able to reconstruct the temperatures from a lot more places with techniques such as this.”

While analyzing lake sediments from Antarctica’s Ardley Island, they stumbled upon an unexpected bounty: penguin bones. “The original purpose of the study wasn’t to go there to find the history of the penguin colony on Ardley Island, it was for relative sea level change,” said Roberts. “But having found the bones and having found some very disparate patterns of geochemistry in the core sample, we thought it’d be an interesting thing to investigate a bit further.”

Scientists had known for a while that Gentoo penguins, which have lived on Ardley Island for 6,700 years, have periodically experienced sharp population declines. Gentoo penguins, which currently number around 5,000 pairs on Ardley Island, are identifiable from other penguins by a white patch on their black feathers that begins behind their eye and wraps around, connecting behind the crown. Similarly, while other Antarctic penguins like the Adélie spend much of their time on frozen pieces of Antarctic sea ice, the Gentoo penguins—which are the northernmost Antarctic penguins—spend much of their time on dry land.

Historical records show that the Gentoo population has declined precipitously five times over the past 6,700 years. But not all of the declines were correlated with climate changes and broader environmental effects. The lake sediment provided a much-needed clue.

Roughly 62 miles southeast of Ardley Island lies the ominously-named Deception Island—so called because from the outside it looks like a normal island, but slip through a passageway into its interior and you’ll discover that it’s actually a ring. The inner waterway is in fact the flooded caldera of a large, active volcano.

The researcher’s geochemical analyses of the lake sediment sample, which included a new kind of biological marking technique to reconstruct the changes through time—and which looked at the varying concentration of guano or penguin poop and volcanic ash—helped uncover a tragic truth: each time Deception Island’s volcano had a sizable eruption, the resulting fallout was enough to almost completely wipe out Ardley Island’s penguin population.

“This study reveals the severe impact volcanic eruptions can have on penguins, and just how difficult it can be for a colony to fully recover,” Claire Waluda, a penguin ecologist for the British Antarctic Survey, said in a statement. “An eruption can bury penguin chicks in abrasive and toxic ash, and whilst the adults can swim away, the chicks may be too young to survive in the freezing waters. Suitable nesting sites can also be buried, and may remain uninhabitable for hundreds of years.”

Exactly how the ash disrupts their population, what happens to the penguins, and why it takes between 400 and 800 years for their numbers to rebound are subjects for future research. But the study is a sobering reminder of how seemingly distant events can have catastrophic effects that linger for centuries. And this unfortunate past might not stay buried: the penguin populations wiped out by historical eruptions were about the same size as the one that exists today, and the volcano is still active.