And they only tested for a fraction of the 85,000 known chemicals 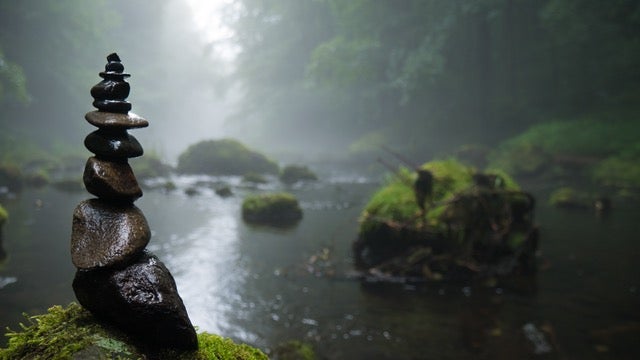 From pesticides to caffeine, chemicals that affect living organisms are making their way into the nation’s rivers and streams. That’s the conclusion reached by a pair of complimentary studies by the US Geological Survey (USGS) and the US EPA, both published today in the journal Environmental Science and Technology.

This is a concern for living things in our environment, and also potentially for human health—rivers and streams supply much of the nation’s drinking water supplies. Previous studies have shown that water treatment facilities remove some, but not all of these contaminants.

“There are large studies that have shown that these kinds of contaminants even in low doses like we’re seeing here, are actually able to cause biological effects,” said Paul M. Bradley a hydrologist with USGS and a co-author on both studies. Bradley says that the effects are extremely broad; “When you think in terms of the stream environment you’re talking about the entire food web. You’re going from microorganisms all the way up to large fish and mammals.”

Bradley and his colleagues took water samples from thirty-five waterways, including three sites far from human habitation that served as controls. The rest of the samples were drawn from a mix of rural and urban environments. The researchers took enough water from each location to run two separate tests. The first test looked for the presence of 719 selected chemical compounds.

Of those 719 compounds, a little more than half or 406 compounds were detected, which says that human-manufactured chemicals are getting into the broader environment. The top ten chemicals included eight pesticides, and two pharmaceuticals—caffeine, and metformin, a drug used to treat type-2 diabetes. And it’s important to note that none of the chemicals were present individually – but rather in kind of diluted soup, with chemicals intermingling with each other.

The second test was even more intriguing. Instead of looking for the presence of specific chemicals, they tested the water samples using bioassays that look for the effects a chemical has on living organisms. Using caffeine as an example, a person who is sensitive towards caffeine could test for the presence of caffeine in a cup of coffee by testing for caffeine, or they could drink it and see if it made them jittery. A bioassay is akin to drinking the cup of coffee but on a cellular level. It has its limits –caffeine after all isn’t the only drug that can make a person jittery- but it has its benefits too. If you didn’t know that coffee contained caffeine, you wouldn’t necessarily to think to test for it. But if you know that coffee is making you jittery you might go looking to see why.

In this case, they tested to see if the water samples impacted estrogen receptors (the female sex hormone), androgen receptors (the male sex hormone) and glucocorticoid receptors (anti-inflammatory compounds often found in steroids). They found that the water samples affected all three, which wasn’t wholly surprising. But when they tried to link back the bioactivity with the chemicals that could have triggered the receptors response they ran into difficulties with androgen and glucocorticoid compounds. Based on their understanding of the 406 chemicals that were present in the water supplies, the androgen and glucocorticoid receptors should not have reacted as strongly as they did. Bringing it back to the caffeine example, it’s like drinking a cup of decaf and jittering as though you’ve drunk a cup of coffee with a shot of espresso tossed in. It doesn’t make sense, but clearly something is making you shake.

“It could be that there are chemicals that we are not analyzing for that are interacting with the receptor,” said Bradley. “It could be that the combination is creating a kind of integrated response that we’re not aware of. Or it’s possible that some of these chemicals actually do interact with this receptor and we just didn’t realize it- nobody directly tested them for this activity before so we’re not aware that they were binding with this receptor. It could be all three of those.”

The long term environmental and health effects are unknown, but it’s folly to think that effect is zero.

“What’s important to remember is those compounds are available commercially because they are designed specifically to have a biological effect. Their commercial viability is based on their demonstrated biological effect,” said Bradley. “Perhaps the more useful question is, “Why would you think they’re not having an effect on the environment?”

Many of the chemicals detected were pharmaceuticals. And though pharmaceuticals are moving away from animal models, one of the first ways that they test for human pharmaceutical efficacy is by testing compounds in fish. That means there’s no reason to think that aquatic life in our rivers and streams won’t be effected by the influx of chemicals we’re putting into the water. “We’re not as different as some would like us to believe,” said Bradley.

The goal of this research—and research like it—isn’t to halt all chemical research. Rather, it’s the first step towards getting a handle on what we’re putting out into the world – and the scale is huge. The 719 compounds that they tested for represent a fraction of the 85,000 manufactured chemicals currently in production. And that list is growing.

At the same time, the researchers found a strong correlation with the highest concentration of chemicals and proximity to a wastewater treatment facility—the closer a river or stream is to one, the more chemicals are present in the water. Medications like birth control, diabetes medication, and other treatments don’t just stay in our bodies. If they did, we wouldn’t have to take multiple doses. Instead, chemicals get excreted from our bodies and they end up getting flushed down the toilet with our waste, eventually ending up at a water treatment plant. Figuring out how to reduce them as a part of water treatment processes is a whole other line of study. “Do we treat waste close to the source [our homes and buildings] as opposed to collecting it and treating it altogether?” said Bradley.

The question of how many chemicals end up in our waterways, and how we prevent it is going to be an ongoing one, with serious consequences.

“Do we adopt green chemistry?” said Bradley. “Do we change the way we design molecules so instead of maximizing their biological activity and their storage life we make compounds that degrade more quickly that are more highly targeted, that don’t hit non-target organisms as much?”

These are the questions the study’s results raise. It remains to be seen how we’re going to answer.

Note: An earlier version of the map of water sampling loaded incorrectly. We have updated the map to reflect the correct locations, and apologize for the error.