You can't spell LOVE without VOLE 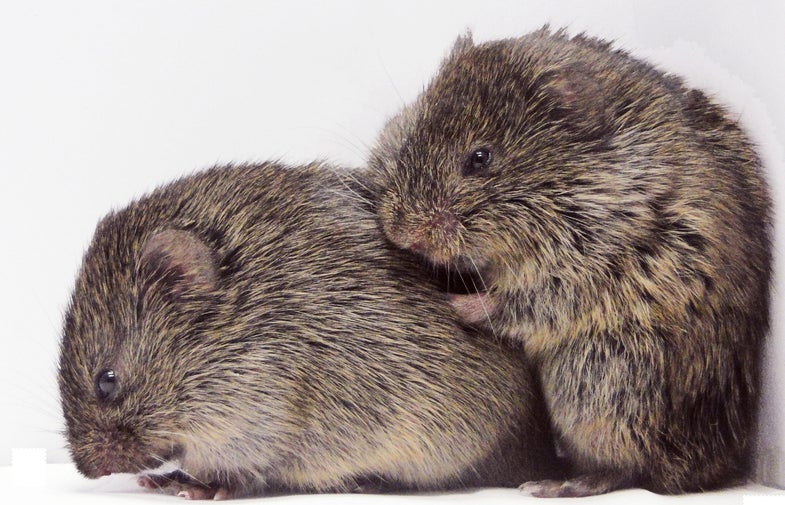 Life on Earth for a prairie vole is a rough one. Across the dry and windswept grasslands of the Central United States and Canada they stake their claim, rummaging on seeds and insects and scurrying nervously through networks of underground tunnels. Cold winters (they don’t hibernate) and a wide array of predators add to the long list of ways to die. Yet, despite the stress and sadness of such a life, the prairie voles carry on with a little help from their friends. A group of scientists from Emory University found that the tiny voles console others in distress, proving that humans and other large-brained animals are not the only species to recognize and help others in need. Their findings are published today in the journal Science.

At Emory’s Yerkes National Primate Research Center, researchers exposed voles to other anxious individuals and observed their responses. Prairie voles are highly social and monogamous animals that mate for life and form deep familial bonds. For this reason, all the voles used in the study were exposed to anxious individuals that were close to them. The responses were uniform. Not only did the voles proceed to touch and groom their agitated partners—behaviors usually associated with consolation—but they also became anxious and fearful themselves, matching their distressed counterpart’s physical states. This behavior, in particular, is the one which raises eyebrows, for it suggests that an empathetic mechanism is driving the consoling response.

The Emory researchers were then able to locate exactly where in the little voles’ brains their emphatic driven behaviors originate: the anterior cingulate cortex, which is the same as in humans. Oxytocin, a brain chemical known for promoting maternal nurturing and social bonding in humans, was also the culprit here. Voles that were injected with an antagonist to oxytocin did not display the emphatic bodily response when they encountered their distressed kin.

Until now, consolation has only been observed in relatively large brained animals—apes, elephants, dogs, and some large birds. This study shows for the first time, however, that animals as small as rodents are capable of empathetic behaviors that extend beyond just ensuring their offspring survive, to actually helping others around them that are in need. “Consolation might be present in many more animal species than was previously thought,” says James Burkett, a neuroscientist at Emory University and lead author of the study.

And according to co-author Larry Young, also a neuroscientist at Emory, it ultimately appears that many of the behaviors considered to be uniquely human are capable of revealing themselves, by natural selection, in animals without complex cognitive abilities. He adds, “This does not mean animals experience empathy in the same way we do, but the basic foundation for empathy and consolation may be present in many more species than once thought.”

How these behaviors evolve and develop in some species and not others is still largely unknown, however. The meadow vole, a very close relative of the prairie vole, leads a solitary and promiscuous life, and displays no affection or consolation to distressed individuals whatsoever. Prairie voles, on the other hand, live in lifelong pairs with the same mate, share parental responsibilities and even form deep social bonds with other non-related individuals. In a closely knit group, a disturbed individual can cause group wide dysfunction (as many humans can probably attest to with personal experience). Consoling them is not only beneficial but necessary to all.

Understanding how little voles care for each other might also benefit humans, too. Although other, albeit highly intelligent animals, have been observed consoling friends and family, this is the first time this has been studied in depth, in a controlled lab setting. The result is simple, but profound. Scientists now know more specifically how the brain drives a consoling response through the use of the chemical oxytocin—which is believed to be the same process in humans. “Detecting and responding to distress in others is often impaired in psychiatric disorders, such as autism and psychopathy,” says Young. “We now have a means of understanding what may be going wrong in those disorders and potentially how to use oxytocin to better treat them.” Perhaps this little rodent caretaker could also end up consoling humans in need as well.