Arctic Report: How To Feed Salmon To The World 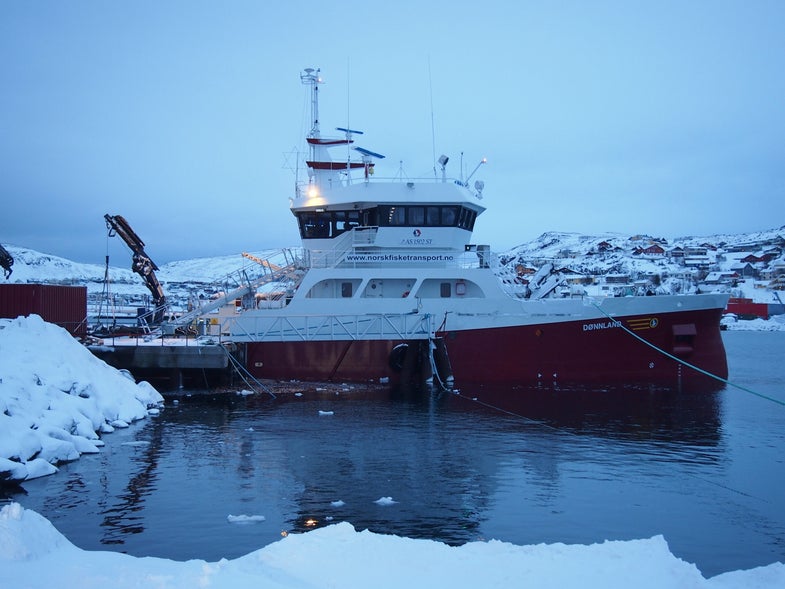 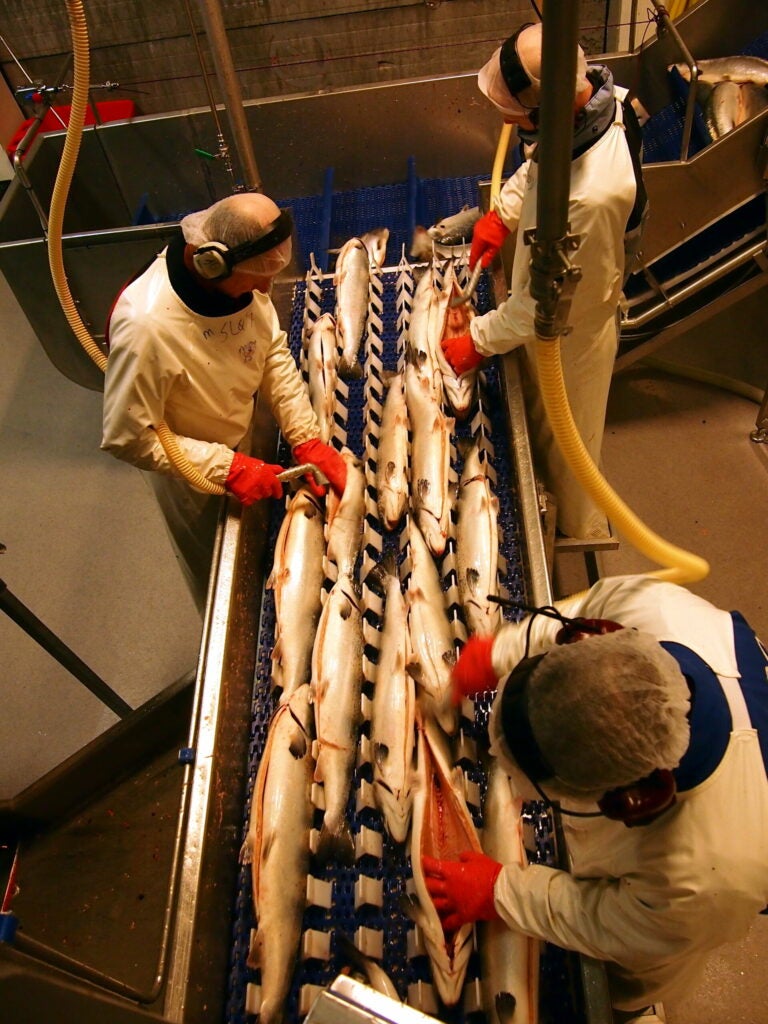 In the Processing Plant

Preparing the salmon for sale

One in five people today depend on fish as their primary source of protein, according to the United Nations. And as the world’s population grows, and the quality of diets improves for many of those people (a.k.a. getting access to protein), so does this demand. The demand for salmon, for example, has been increasing an average of 13 percent a year, according to the Norwegian Seafood Council.

Fish populations in the world’s oceans, in contrast, are crashing and burning. More than 90 percent of the world’s fish species are fully exploited or depleted, according to the Food and Agriculture Organization. Of that, 29 percent are overfished at unsustainable levels; the other 61 percent are fully fished, meaning they’re considered sustainable as long as fishing doesn’t increase.

Fish farming, or aquaculture, is one way to try and deal with this situation. I visited one such operation run by Cermaq in Hammerfest, Norway with a few other journalists. Here is how fish farms work today, and how different they’ll look tomorrow.

Norway is the Leader

“We have to do aquaculture,” says Torgeir Neilson, a lifelong Hammerfester and former fisherman who now coordinates Cermaq’s dozens of sea sites. “Some people think we can live off of wild fish we catch in the sea, but we can’t anymore.”

In Norway, the salmon farming industry has been expanding since the 1970s. The northern nation is now the biggest producer of farmed salmon in the world. That may be in part because Neilson says Norwegians are a fish-eating people. He, for example, eats salmon twice a week. But Norwegians are hardly alone in that. People in the rest of the world are big fans of fish as well.

Cermaq is a major player in the global farmed salmon market. They operate fish farms in Norway, Canada, and Chile and produce 137,000 tons of salmon annually, 50,000 of that in Norway. Since 2014, the company has been wholly owned by Mitsubishi. (Yes, the Japanese car company). Their fish are exported whole to more than 25 countries—95 percent of that fresh and the remaining 5 percent frozen.

The Atlantic salmon Cermaq raises are born at freshwater sites and then transferred to sea sites as smolt (young salmon), when they are between 2 and 6 ounces in size. In 2016, the Norwegian operation stocked 8 million fish.

Cermaq, like most of the world’s fish farms, raises its fish in massive, net-like cages, which it places underwater, in fjords. Here the aquatic environment is somewhat similar to the fish’s natural setting, and they are more protected that they’d be in the open ocean.

The salmon are fed fish meal, fish oil, and/or vegetable oil (although the latter leads to lower levels of healthy omega-3 fatty acids in the salmon). The fish require just 12 to 18 months to mature. To keep an eye on their growing salmon, the company keeps underwater cameras in their cages. 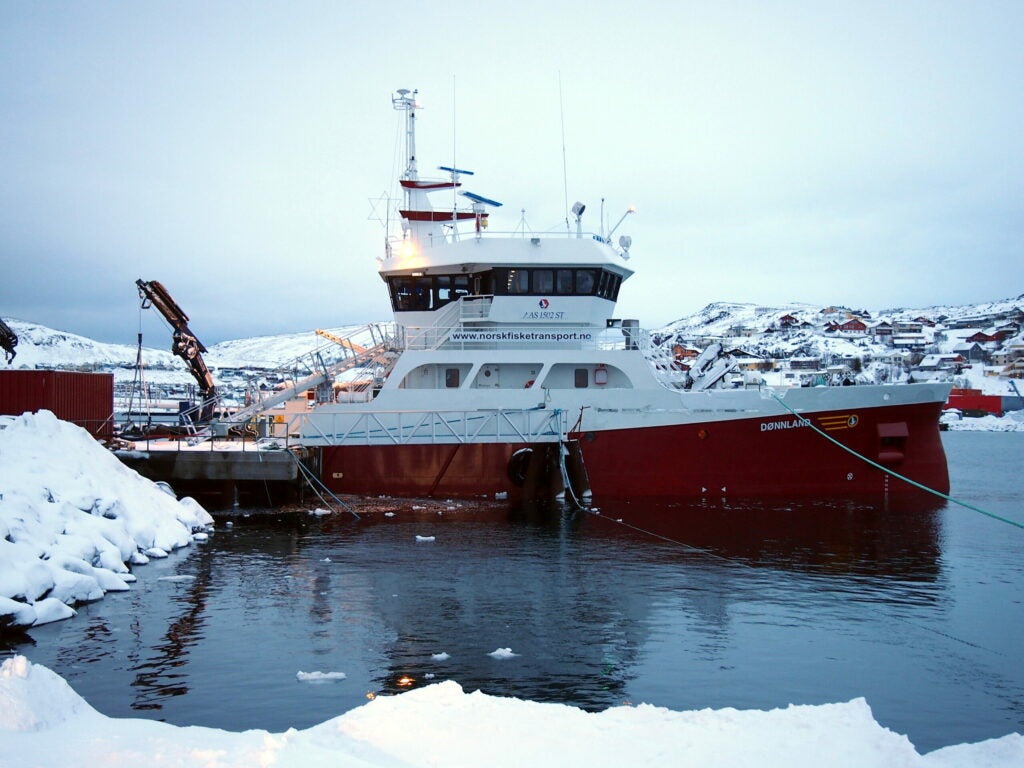 This ship transports Cermaq’s farmed salmon from the sea sites to the processing plant.

The fish are transported from the sea sites to a processing plant in Hammerfest with a well boat called the Dønnland. It has a sea lice filter as another layer of protection to keep parasites out. The salmon can stay in the boat for days if needed.

The waste from the plant is neutralized to lower the pH, and then sold as fertilizer.

Aquaculture presents a number of real ecological concerns. Fish inevitably escape from these cages into the wild, for example, which can mess with wild populations’ genetic pools or interfere with their spawning grounds. Cermaq claims they’ve only had two escapees between 2010 and 2015, but it’s hard to believe that it’s possible to keep track of all 8 million fish at all times.

Fish farms also produce a whole lot of waste, and the chemicals used to treat the fish against diseases can pollute ocean waters. The current limit for these treatments is three per growth cycle. 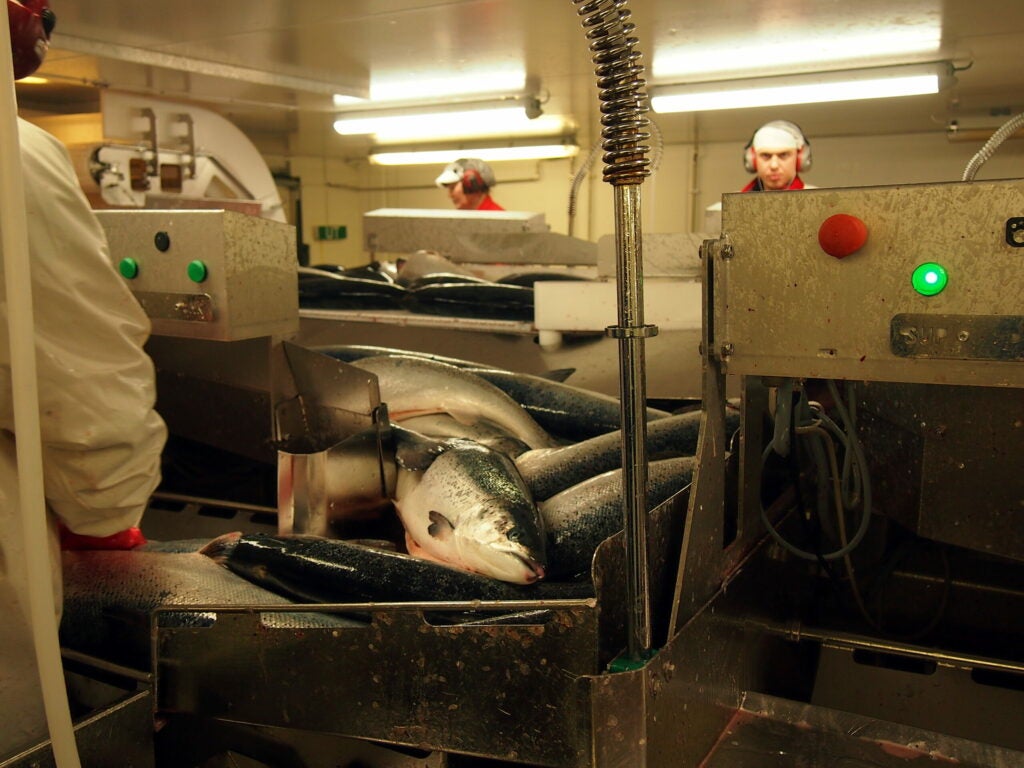 Prepping the Salmon for Sale

In the processing plant, salmon are cut open and cleaned.

An arguably more problematic issue with fish farms is that of sea lice. These are parasites that can kill fish and transmit bacterial or viral diseases. Whenever animals live at high concentrations in close quarters—people and fish included—lice tend to thrive. The sea is not immune.

The current legal limit for sea lice is 0.25. That means that there can be no more than 1 louse found for every four fish. Once the lice attack a farm, they can spread to nearby farms or to wild populations.

Another disease having a huge impact on salmon farms is Piscirickettsia salmonis, or SRS. This bacterial disease causes lesions, anemia, hemorrhaging, ulcers, and eventually death in fish. This has been a major problem in Chilean salmon farms, though Norway has not felt its effects as acutely.

Just like with livestock operations on land, antibiotics are a major concern in the oceans, too. Vaccinations against certain diseases have helped to drastically reduce the amount of antibiotics used, but SRS, for example, still doesn’t have a viable vaccine.

So how many antibiotics are used for fish in Norway? “It’s very, very little,” Neilson says. “Less than one percent of the total antibiotics in Norway are used on fish.” In fact, he said that antibiotics use for fish farms has been reduced about 99 percent since the 1980s. 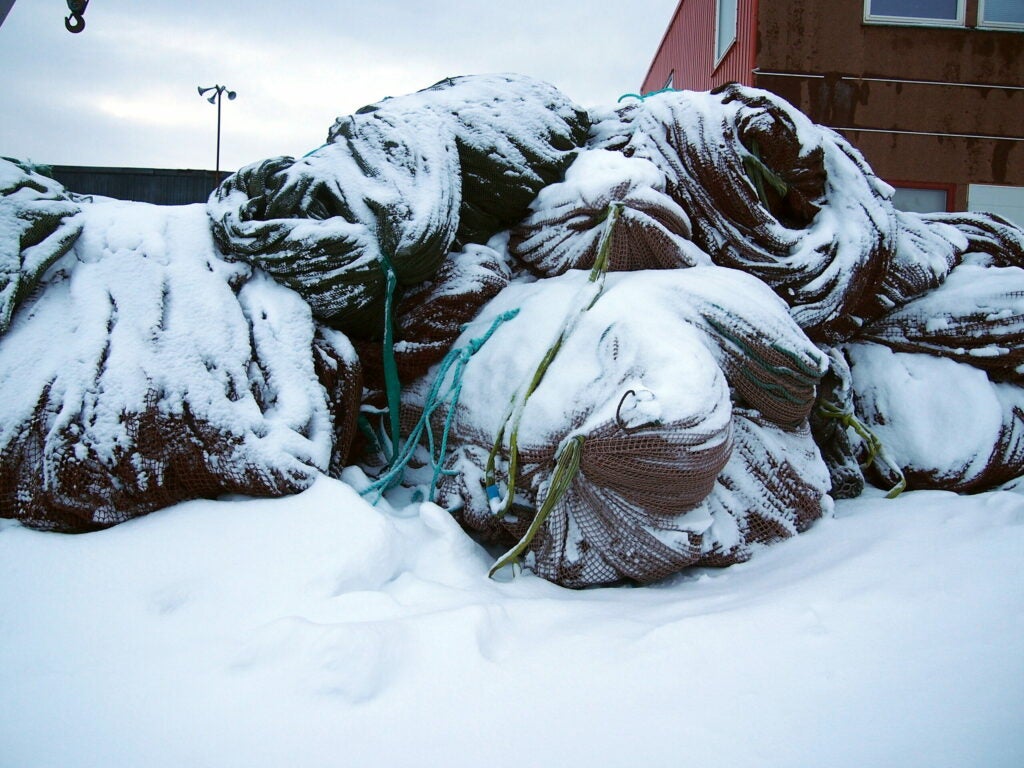 After the net-like cages have been used for one growth cycle, they get brought up and cleaned. These ones, covered in snow, are still waiting for their turn.

“There will always be people who are critical of what we are doing,” Neilson says. But Cermaq is working to decrease their environmental impact and health risks in a number of ways. Among their 20-some licenses, they now operate two green licenses, which were recently introduced as an experiment by the Directorate of Fisheries. These licenses are in two of the company’s sites in Alta, two hours south of Hammerfest. Four big changes are involved: 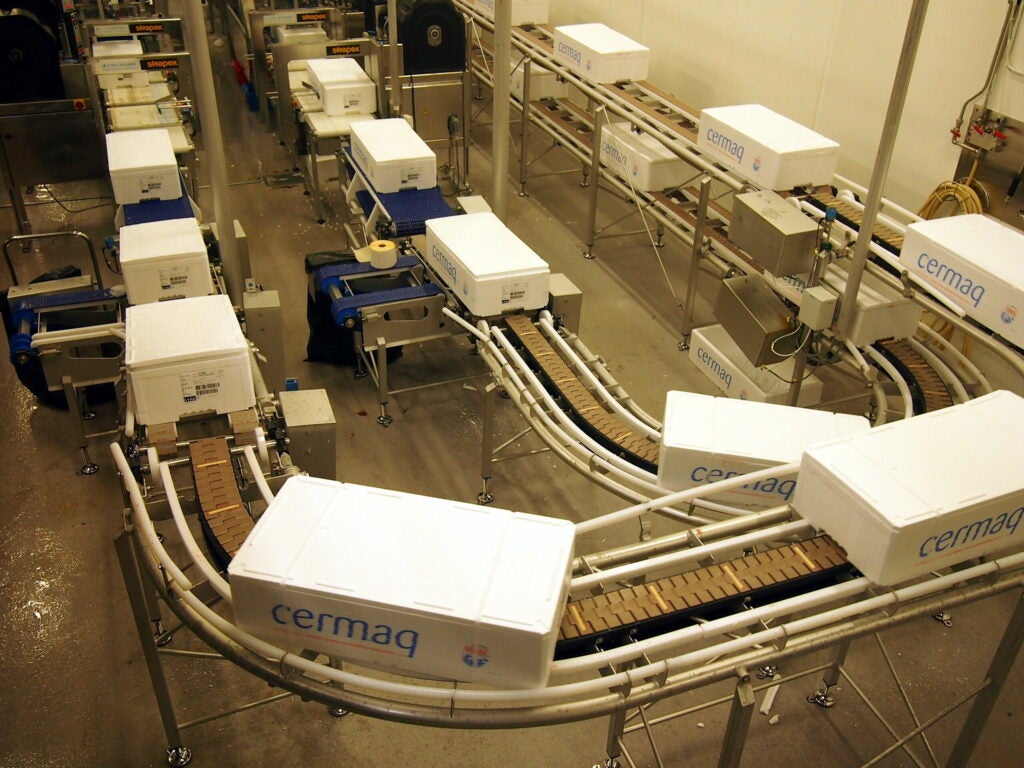 The fresh salmon gets packed with ice in insulated boxes and then shipped around the world.

The Future of Fish Farms is on Land

As the climate changes, temperatures in the Barents Sea are expected to rise, creating an environment that is hospitable to non-Arctic species of fish not normally seen here. Neilson says Cermaq is not feeling the effects in their sea sites just yet. “It’s the same temperature today as when I started,” Neilson says. Water temperatures have consistently been 50 degrees F in July, August, and September for “as long as I can remember,” Neilson says.

To improve and innovate their operations, and to adapt to upcoming changes, Cermaq established the Arctic Salmon Research Center last year. The scientists there aim to come up with more customized food strategies, diversify the geography and species in their sea sites, look into different smolt, and improve the overall health of their fish.

One of the major shifts that Neilson expects down the road is land-based fish farming operations. By isolating closed cages on land, farms can reduce disease and pollution. To be sure, operations on dry ground introduce different challenges. Making space for a massive structure on the shore, for example, is a real problem in many coastal areas.

Cermaq has experimented with these methods already, but their set-up was taken out by a storm. (Yet another risk to consider with these kinds of farms.)

Still, they’re giving it another go. Neilson is convinced the effort will pay off. “This is the future,” he says. “We have to do a lot of research, but we think it’s coming.”

*UPDATE: The FAO fisheries estimates have been updated to reflect the results of a more recent (2014) version of the State of World Fisheries and Aquaculture (SOFIA) report.