FYI: Can Anything Move Faster Than Light?

Yes, the universe itself will eventually outpace the speed of light. Just how this will happen is a bit complicated,... 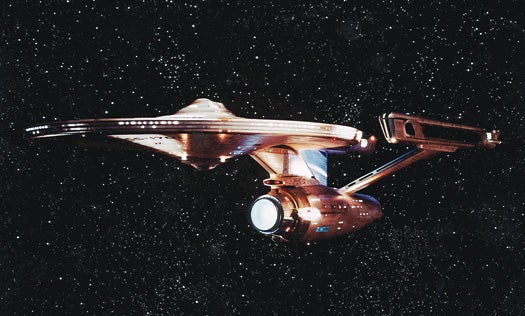 Yes, the universe itself will eventually outpace the speed of light. Just how this will happen is a bit complicated, so let’s begin at the very beginning: the big bang. Around 14 billion years ago, all matter in the universe was thrown in every direction. That first explosion is still pushing galaxies outward. Scientists know this because of the Doppler effect, among other reasons. The wavelengths of light from other galaxies shift as they move away from us, just as the pitch of an ambulance siren changes as it moves past.

Take Hydra, a cluster of galaxies about three billion light years away. Astronomers have measured the distance from the Earth to Hydra by looking at the light coming from the cluster. Through a prism, Hydra’s hydrogen looks like four strips of red, blue-green, blue-violet and violet. But during the time it takes Hydra’s light to reach us, the bands of color have shifted down toward the red end—the low-energy end—of the spectrum. On their journey across the universe, the wavelengths of light have stretched. The farther the light travels, the more stretched it gets. The farther the bands shift toward the red end, the farther the light has traveled. The size of the shift is called the redshift, and it helps scientists figure out the movement of stars in space. Hydra isn’t the only distant cluster of galaxies that displays a redshift, though. Everything is shifting, because the universe is expanding. It’s just easier to see Hydra’s redshift because the farther a galaxy is from our own, the faster it is moving away.

There is no limit to how fast the universe can expand, says physicist Charles Bennett of Johns Hopkins University. Einstein’s theory that nothing can travel faster than the speed of light in a vacuum still holds true, because space itself is stretching, and space is nothing. Galaxies aren’t moving through space and away from each other but with space—like raisins in a rising loaf of bread. Some galaxies are already so far away from us, and moving away so quickly, that their light will never reach Earth. “It’s like running a 5K race, but the track expands while you’re running,” Bennett says. “If it expands faster than you can run, you’ll never get where you’re going.”

This article originally appeared in the October 2011 issue of Popular Science magazine.