Researchers might not have to dig as deep as they thought to find proof of biological activity. 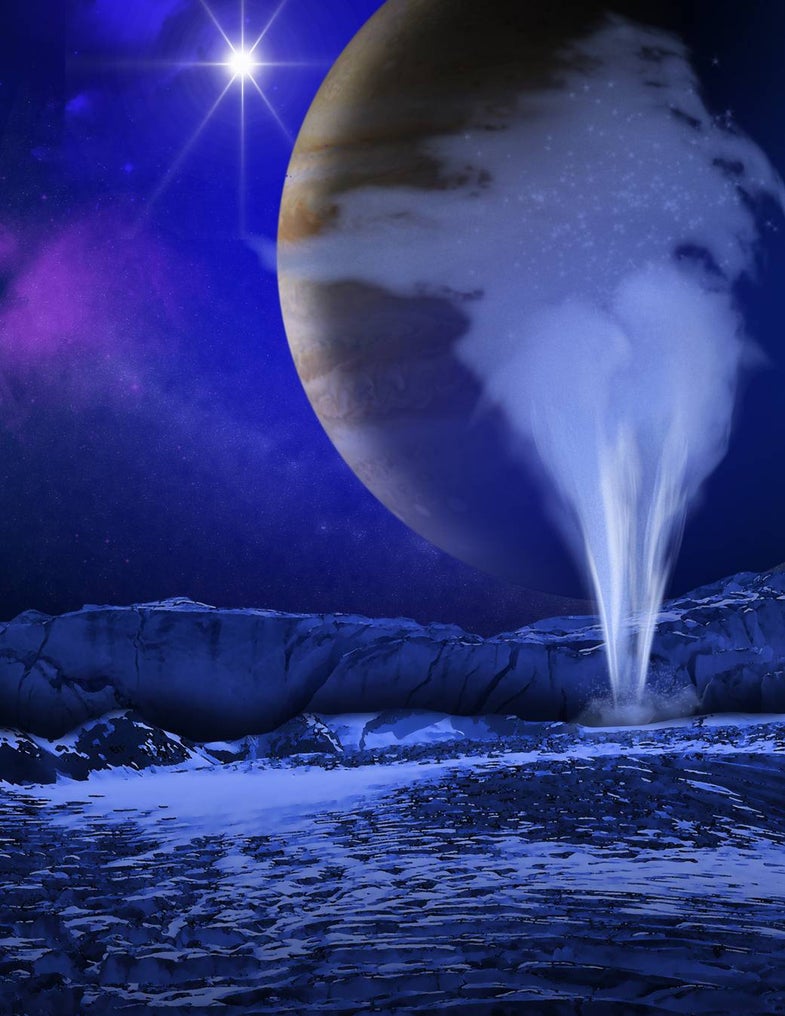 As it turns out, you can literally scratch the surface of Europa to find life.

In a paper published today in Nature Astronomy, a group of JPL researchers make the claim that even areas exposed to the harshest radiation, you may not need to dig down more than 20 cm, or a little less than eight inches, into the icy surface to find evidence of life on Jupiter’s moon Europa.

Europa is one of Jupiter’s four large moons, is known to have an ocean underneath it, and is considered one of the best places to have life within our solar system. But the moon is also exposed to immense amounts of Jupiter’s intense radiation, which extends for beyond the planet. While life below Europa’s thick ice shell would be well-protected, the researchers wanted to know if one could still find evidence for life on the surface or if it would be destroyed by radiation.

“We’ve known for a long time that the radiation on the surface of Europa is really dominant on the surface, like sitting inside a particle accelerator,” Tom Nordheim, a Jet Propulsion Laboratory research scientist and lead author of the paper, says.

Here’s a rough picture of how evidence of life would get from the ocean below to the surface above: Europa is known to have a few active “plumes,” something like an ice geyser that sprays ocean water a few miles into space before it falls back to the surface. That ocean water may, like our own, be filled with microbes and other chemicals directly related to life. Microbial life is unlikely to survive the brief off-world excursion. But byproducts of life might. The study wanted to know how much of those byproducts would survive and whether they might be detectable by a future NASA mission.

The study examined where Jupiter’s radiation hits hardest. In those areas, the surface is too continually battered by radiation for some amino acids—the building blocks of proteins—to persist. But about 4 to 8 inches down, those amino acids are a bit more protected. It could work like this: amino acids from the interior ocean get ejected into space, change due to the radiation, fall back to the surface, and become covered by more ice deposits on a timescale that allows some amino acids to survive. In turn, a future lander would just have to take a core sample deep enough to find the amino acids and confirm that Europa is ripe for life. In areas outside the harshest parts of the radiation, the amino acids might be literally right under the surface.

“Even in the harshest radiation zones, you really just have to scratch the surface to find material that has not been destroyed,” Nordheim says.

This has big implications for NASA’s future plans around Europa. In 2022, NASA will launch the Europa Clipper toward the Jupiter system. In order to protect the probe from the radiation it would experience were it to stay in Europa orbit, the Clipper will actually enter orbit around Jupiter and swoop by Europa for several close flybys. Congressional appropriation language calls for a lander to be part of the mission, though NASA has, for the most part, been concentrating on the orbiter design. This study shows that it’s not a tall order to find biosignatures with a lander—whether in 2022 or on a Europa mission more down the line.

Preliminary plans for the lander indicated that it might be able to drill 10 centimeters into Europa, but those plans were released last year and are subject to change.

“This signifies that we can drill, and we can drill at marginally shallow depths,” Kimberley Warren-Rhodes*, a SETI Institute scientist who studies planetary habitability, says. “That really ups the ante of being able to go and look for habitable environments.” (Warren-Rhodes was not involved in the study.)

Even though plenty of people might like to explore Europa in person, robotic exploration is currently our best option. While the radiation strikes some areas of Europa harder than others, no matter where you land, the all-encompassing radiation would be positively lethal to human beings. “It would certainly be much more beneficial to be outside those radiation zones, but I don’t think standing on Europa anywhere is a benign environment for human beings,” Warren-Rhodes says.

The next steps for the team involve taking a deeper look into how Europa’s magnetic field and ionosphere interact with and possibly push against Jupiter’s radiation belts. Data on Europa is somewhat hampered by the failure of the high gain antenna aboard NASA’s Galileo probe that orbited Jupiter in the 1990s and 2000s, but Nordheim says there’s enough to go off of to build good models for Europa. If those models do find that Europa’s magnetic field protects the moon from radiation, it could paint an even sunnier picture for finding biosignatures on the moon, and perhaps even identify ways the search could be done by an orbiter.

No matter how those future studies pan out, the search for life in the solar system is still a deep, heavy question. Fortunately, today’s study shows that exobiologists might not have to dig quite as deep as they thought to answer it.