Can Hypnosis Kill You?

Short answer: No, but you’re getting veeeeeeery sleepy 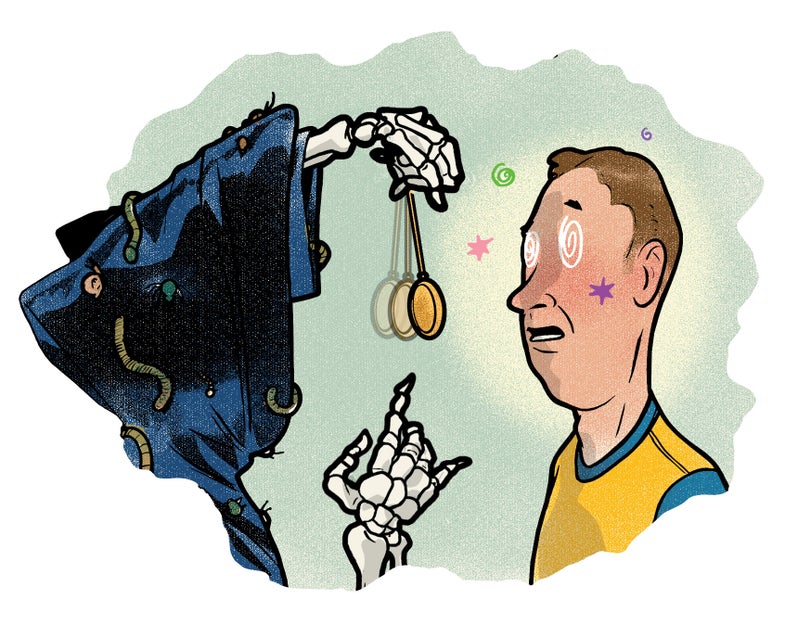 The first account linking hypnosis and death in the medical literature was in 1894. Ella Salamon, niece of a Hungarian count, was put into a trance and then “fell from her chair with a hoarse cry,” according to an attending doctor. “There is no doubt that she died in hypnosis,” said Richard von Krafft-Ebing, a noted psychiatrist of the time, “but that she died by hypnosis is questionable.”

Accounts of such fatalities or psychiatric harm from hypnosis have appeared sporadically ever since. In 1979, a stage hypnotist asked a young Israeli mother to regress to childhood—a time when she’d been hiding from the Nazis. She later reported that the newly uncovered memories put her in a state of distress for years. Other reports tell of trance subjects left stuporous and suicidal.

But these cases are anecdotal. Studies suggest that the negative side effects are generally mild at worst. In the 1970s, researchers from California State University in Fresno looked into the risks by hypnotizing 209 undergraduates. A few suffered headaches or nausea; 25 reported feeling light-headed or drowsy—hardly worse than what the students experienced taking an exam or sitting through a lecture.

“Hypnosis, in and of itself, isn’t dangerous,” says psychologist Bruce N. Eimer. It can be a therapeutic tool; but like all tools, he says, in the hands of someone incompetent or who uses it inappropriately, it can cause harm. “Would a massage therapist perform acupressure on an 84-year-old with osteoporosis?” Eimer asks. Probably not. Similarly, it would be unwise for a clinician to use hypnosis without first assessing if a patient is too psychologically fragile.

Ask Us Anything
Psychology
ask anything
hypnosis
psychiatry
september 2015
therapy