Lord of the infinite supply rings 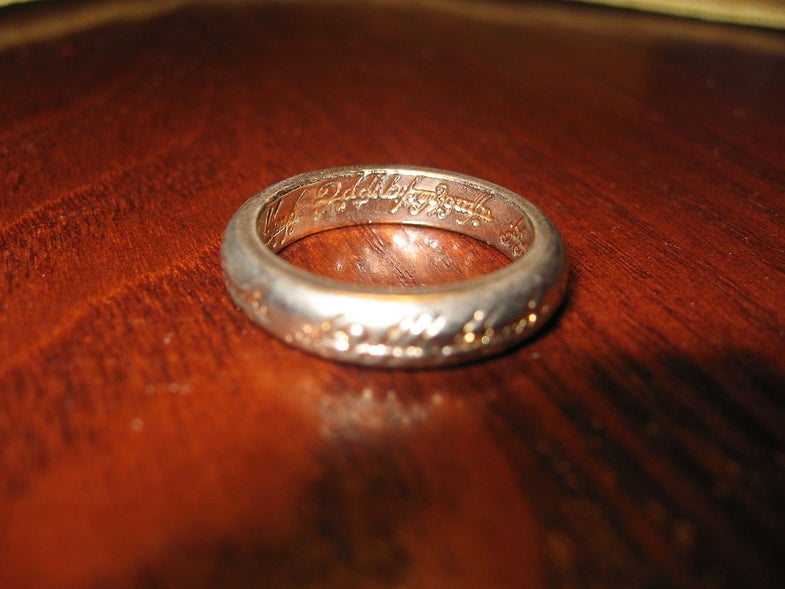 Napoleon famously quipped that an army marches on its stomach, and a fellowship of the ring is no different. Throughout the series of fantasy novels by J.R.R. Tolkien, we are treated to complaints about the lack of food to meet a hobbit’s voracious appetite. Now, thanks to a study by Skye Rosetti and Krisho Manaharan that was published in the Journal of Interdisciplinary Science Topics, we have an idea of just how hungry the hobbits might have realistically been. In order for all 9 members to walk 92 days to Mordor, they’d need to consume exactly 1,780,214.59 calories.

This is not just a one-off study. To calculate the whole caloric need of the trip, Rosetti and Manaharan had to first figure out the individual energy needs of the several different species in the fellowship, which includes four hobbits, one elf, one dwarf, and three humans. A previous work of Rosetti’s and Manaharan’s does this, which is aptly titled “Modelling the [Base Metabolic Rate] of Species in Middle Earth]”. Hobbits require a daily diet of about 1,800 calories, while elves can survive on just 1,400.

To figure out how much energy the whole Fellowship would need to get from Rivendell to Mordor, parts of their journey are abstracted, and important plot points, like spoiler alert Gandalf’s death in Moria end spoiler alert do not happen. This is an ideal version of the journey, or at least as ideal a version of a fictional adventure can be calculated.

Rosetti and Manaharan didn’t stop at just figuring out the energy cost. They also examined a way to meet that. In the woods of Lothlorien, the Fellowship is given Lembas. The Elves of Lothlorien describe it thusly:

Taking the line about sustaining a man for a day of long labor literally, Rosetti and Manaharan calculate the caloric load of a single lembas at 2638.5 calories. To sustain the entire Fellowship, they’d need to bring 675 loaves of lembas with them on their adventure.

With that much food needed why even adventure? In another paper, also published in the Journal of Interdisciplinary Science Topics, Rosettit and Manaharan provide an answer: The air of Middle Earth predisposes people to heroism.