But, as with many nuclear-disaster health studies, the findings, and what they mean, are controversial. Following the meltdown at the Fukushima Daiichi nuclear power plant, monkeys living in nearby forests have been found to have lowered blood cell counts, according to a new study. What that means for people living—or who once lived—in the area is unclear.

Because these Japanese macaques are closely related to humans, the results suggest similar exposure to radiation might affect humans similarly, according to the study’s authors, a team of veterinarians from several Japanese research institutions. The monkeys aren’t ill, but their altered blood cell counts may make them less resistant to infections, the team wrote in their paper, published yesterday in the journal Scientific Reports.

However, a few researchers the Guardian talked with disagreed. “Unfortunately, this is yet another paper with insufficient power to distinguish real effects and relevance to human health,” Geraldine Thomas, a biologist at Imperial College London who studies cancer in people living in Chernobyl, told the Guardian.

Studies of the effects of the Chernobyl meltdown on people and other animals have been controversial, too. I’m not sure why. Are such studies difficult to perform well? Have Chernobyl scientists been sloppy or negligent? Or do some scientists worry about panicking “the public” about nuclear meltdowns?

Studies of the effects of the Chernobyl meltdown on people and other animals have been controversial, too.

It is true that when societies think about whether to support nuclear energy, they should weigh many factors. Taken alone, studies like this one might suggest nuclear power plants are dangerous or not worth it. But it’s important to keep in mind that calculations of how likely power plants are to fail are separate from studies like this. You might still come to the same conclusion after weighing the risks, or you might not.

Smart decisions after a power plant failure may also help stave off effects like those the Fukushima macaques suffered. A report published by the World Health Organization last year found that people in Japan have very low increased risks for cancer because of the Fukushima accident. That’s thanks, in part, to a government ban on food grown in the area. The macaques, on the other hand, spent their winters eating radiation-contaminated tree bark and beetles.

Okay, let’s say you care about what happened to the monkeys for their own sake. They are pretty cute. They’re of a species, Macaca fuscata, that’s common throughout Japan, so they’re kind of a national icon. One population of them is even famous for lounging in hot springs, just like people do. What happened to the ones in Fukushima? 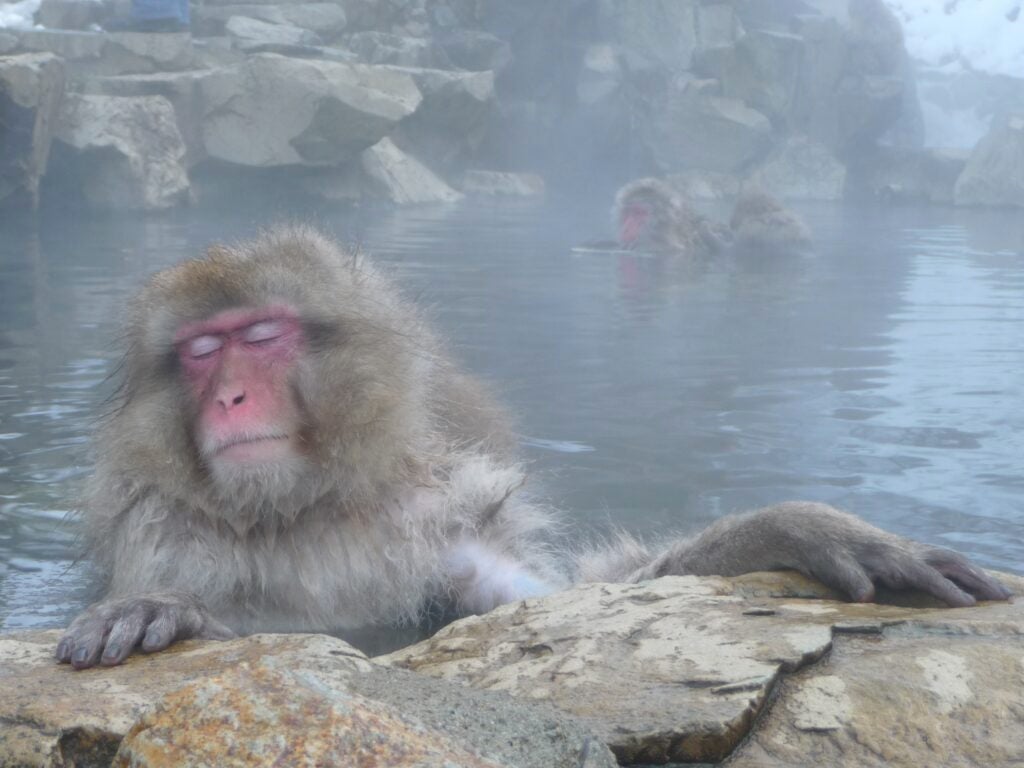 These data come from 92 monkeys veterinarians captured between April 2012 and March 2013. (The disaster occurred in March 2011.) About two-thirds of the monkeys lived in Fukushima, while the rest lived in Shimokita.

It’s impossible to prove, from this study, that the differences between the Fukushima and the Shimokita monkeys were caused by the Fukushima Daiichi disaster. One small study published in 1967 did find that macaques from different regions of Japan all had similar blood measures, suggesting the Fukushima and Shimokita monkeys are supposed to be the same. However, the scientists are missing a major measure. They don’t have measurements of the Fukushima monkeys’ blood cells from before the disaster. That’s understandable; taking blood samples from bunch of Fukushima macaques before the meltdown would have taken rather more foresight than anybody had.

The Guardian covers more of the debate about whether radiation exposure led to the Fukushima monkeys’ lowered blood-cell counts. Outside scientists say other things could have caused the difference, while the research team says they haven’t been able to find anything else to explain it.