What’s In Your Drinking Water?

The liquid pharmacy in your glass, and why you shouldn't be too concerned 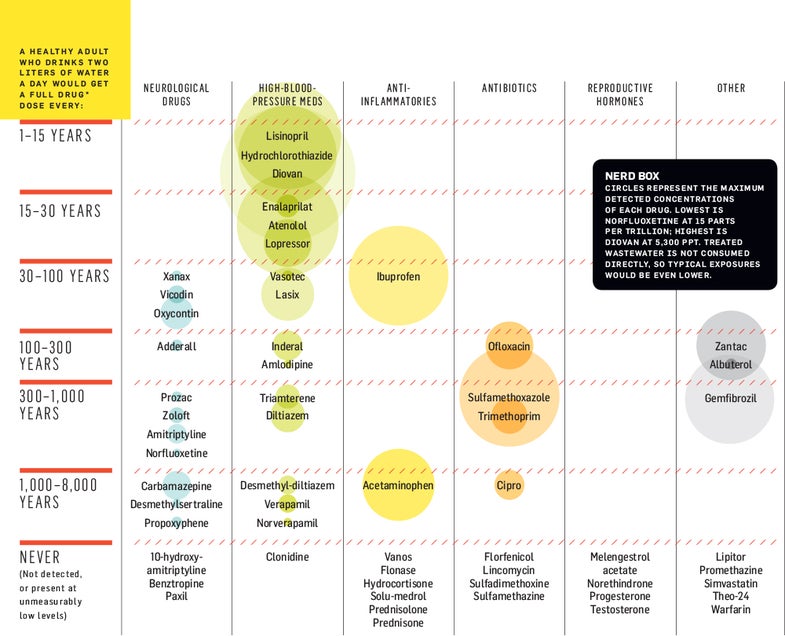 In the 1970s, several studies turned up pharmaceuticals in treated U.S. sewage water, and drugs have been a known unknown in water supplies ever since. Recently, researchers at the Environmental Protection Agency tested 50 U.S. wastewater-treatment plants serving more than 46 million people for 58 common drugs. They found many of the meds, but thankfully at concentrations so low it would take years to drink a full dose. –Jessie Geoffray

*The study tested for generic compounds, but some brand names are listed here for easier identification.

About 750,000 people in the U.S. end up with diarrhea each year from drinking water contaminated by the Cryptosporidium parasite. In part, that’s because Crypto is resistant to the chlorine that water-treatment plants use to kill other microbes. Dozens of cities around the world are now installing massive ultraviolet-light arrays to zap the germ. As water flows through treatment facilities on its way to the tap, it passes through pipes specially outfitted with UV lamps. The UV light penetrates Crypto’s thick protein shell, damaging the pathogen’s DNA and rendering it harmless._ –Peter Andrey Smith_

For a study published in 2013, researchers tested 141 drinking-water wells across northeastern Pennsylvania. They found methane concentrations six times higher in wells close to hydraulic fracturing operations—contamination they propose is likely due to poor natural-gas-well construction. The Environmental Pro-tection Agency plans to release its own comprehensive study this year. –Jessie Geoffray