Well, at least (ant) war is good for something. 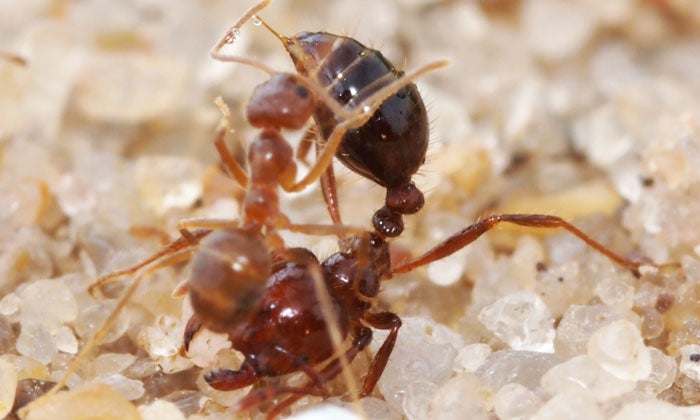 There are not many creatures that can stand up to fire ants, nor their famously painful sting. Besides causing discomfort in mammals like humans (I’ve been stung, and it doesn’t feel great), this venom has potent insect-killing powers, with the ability to knock out many of its ant rivals and other six-legged prey. But the venom is not effective against tawny crazy ants, a new invader spreading in areas of the U.S. Gulf Coast that can outcompete fire ants (Solenopsis invicta).

But how? Recent research has shown that the crazies can neutralize fire ant venom by mixing it with the formic acid that they excrete.

And that’s not all. The fire ants’ venom contains toxic alkaloids, which are chemically basic (as opposed to acidic). When the crazy ants (Nylanderia fulva) neutralize these chemicals with their own acid, it forms a viscous, greasy-looking substance. Upon closer inspection, this byproduct of ant-on-ant warfare is actually a very special substance called an ionic liquid, which has never before been observed in nature.

An ionic liquid is basically a liquid salt; in fact, they used to be called “molten salts.” If you heat up table salt to 1,474 degrees Fahrenheit, for example, you’d get a type of ionic liquid. But they can also exist at much lower temperatures, and sometimes the term “ionic liquid” is restricted (somewhat arbitrarily) to chemicals that are liquid near room temperature. In any case, humans have created many, many different kinds of ionic liquids, which are used for all sorts of industrial processes, for example in batteries, electrolytes, sealants, and solvents.

But they hadn’t been found in nature before, an absence described by the authors of the current study as “puzzling.” Their research, published in the journal Angewandte Chemie (German for “applied chemistry”) suggests that there may be more ionic liquids in nature and that they can have important biological functions.