A vibrant map of never-before-seen terrain 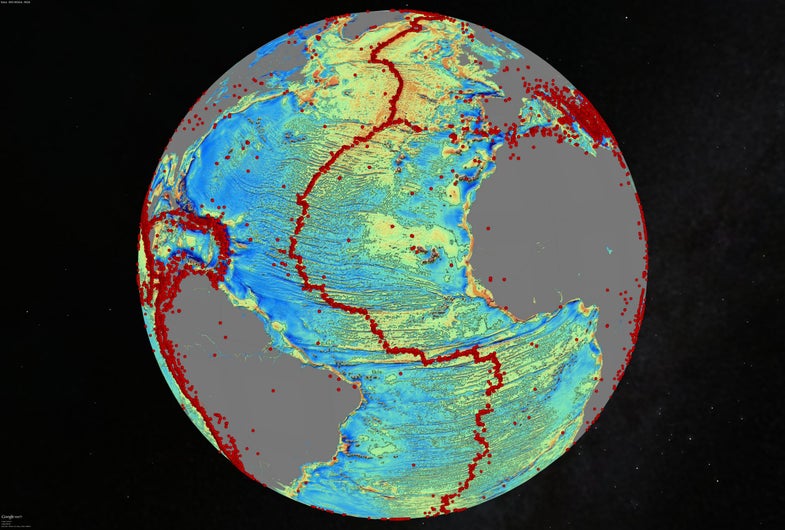 While many detailed maps exist of Earth’s continents, what lies beneath our planet’s waters has remained somewhat of a mystery. So far, only 10 percent of the seafloor has been mapped at high resolution, leaving researchers pretty eager to know what’s going on in that other 90 percent.

Well now, researchers at Scripps Institution of Oceanography at UC San Diego are painting in the rest of the picture. Harnessing never-before-used satellite altimeter data from the European Space Agency’s (ESA) CryoSat-2 and NASA’s Jason-1, the scientists have created stunning maps of Earth’s entire seafloor, bringing to light mountains and ridges that have never before been charted. The maps give the researchers a new understanding of deep ocean plate tectonics and little-studied ocean basins.

The vibrant images of these underwater landscapes were crafted by measuring gravity at various parts of the ocean. According to lead researcher David Sandwell, both the satellites are tasked with capturing the Earth’s gravity field over the oceans.

“The satellites orbit the earth and sends out thousands of radar pulses a second,” Sandwell, a geophysics professor at Scripps. tells Popular Science. “So we use that data to generate a topography of the ocean’s surface.” That topography highlights subtle variations and bumps in the oceans’ waters, telling a lot about the surface underneath. For example, if the ocean is slightly raised at one point, it serves as an indication of a larger object below.

“Let’s say you have a volcano on the ocean floor that is 2,000 meters tall,” Sandwell explains. “It has extra mass associated with it, and it will perturb the gravity field locally. That perturbation is expressed in the sea surface as a bump.” By mapping out all the bumps and indentions in the water, the researchers had a pretty good snapshot of the variations in the Earth’s crust.

In order to determine how much underwater mass was associated with a surface bump, the researchers developed a scientific model using the laws of gravity, calibrated by actual measurements taken by survey ships. These ships, which are responsible for mapping the 10 percent of the ocean’s floor that’s been mapped so far, use specialized sonar systems called multibeam echo sounders to acquire detailed depth information of the seafloor. 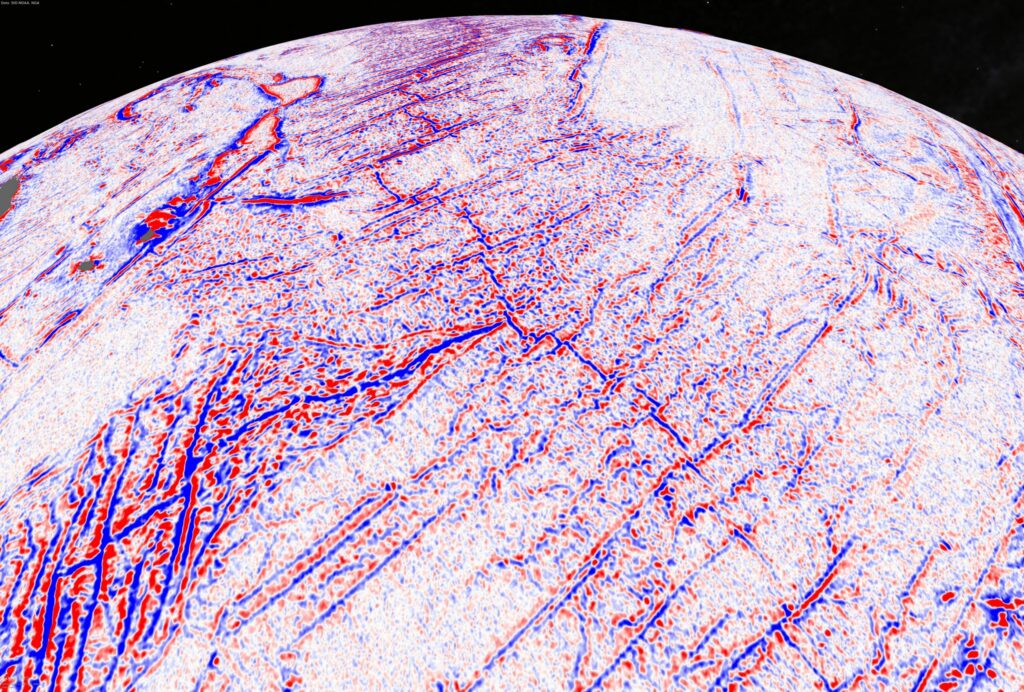 A gravity gradient model of the Indian Ocean Triple Junction.

Sandwell notes that their maps improve upon seafloor images from the 1990s, which were created using older satellite imagery. While those images revealed many ridges, transform faults, and fracture zones that had never been seen before, they only captured areas of the seafloor that were relatively young and didn’t have much sediment cover. These most recent maps highlight areas of the underwater surface that are much older, where thicker sediment cover has made the areas a lot more dense.

Along with providing the researchers with a better understanding of the waters’ uncharted depths, Sandwell says these maps will be useful tools for the military when it comes to handling their underwater technology. “When you launch a missile from a submarine, its launch characteristics are going to be perturbed by the gravity field,” Sandwell explains. “It’s going to affect the initial takeoff angle of the missile, so you have to correct for that. The military and even some civilian people need this gravity model to do corrections to their underwater sensors.”

But most significantly, Sandwell says it’s important for us to know in detail what lies beneath our oceans’ surfaces. His dream is for the entire seafloor to be mapped at high resolution.

“That 10 percent of high resolution that’s been mapped – it’s about the same resolution of what we have with maps of Mars and Mercury,” Sandwell says. “We know more about these other planets than we know about the sea floor. We need to try to make high resolution maps everywhere.”

The researchers published their findings in the journal Science.