Three animals inspiring the armor of the future

Seashells, fish, and spiders may hold the key to better bulletproof vests. 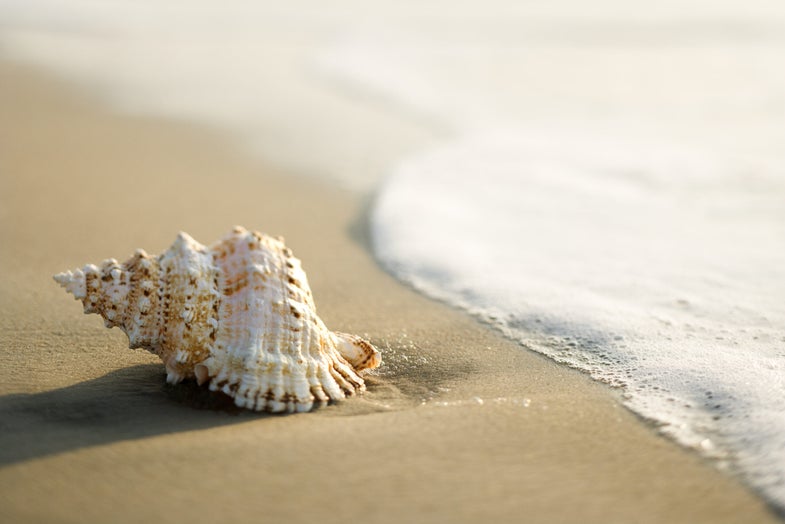 The animal kingdom is full of formidable armors. Some creatures don rigid shells or bony plates. Others favor a more flexible coating of scales. All of these shields are specialized to help their wearer withstand whatever nature throws at them, from pounding waves to predators’ teeth and claws.

And now, this vast arsenal is inspiring new armors for people. Scientists are investigating what makes conch shells and fish scales so tough and designing their own versions. They’re even turning to materials like spider silk and dreaming up new, protective functions for the super-strong goo. In a few years, these new armors could show up in bulletproof vests, protective gloves, sports helmets, and even athletic wear.

“Nature has been playing this game for millions and millions of years,” says Francois Barthelat, a mechanical engineer at McGill University in Montreal. “It’s really a very large reservoir of inspiration.”

Here are three ways that animals are helping us protect ourselves.

The alligator gar is not an easy fish to kill. Found in the waters of southern states like Louisiana and Texas, it sports nearly impenetrable scales. “It’s very bony and it almost feels like teeth,” Barthelat says. This covering is heavier than most fish scales, so the gars can’t maneuver very quickly. It’s also so tough that a regular knife cannot slice through it. To cut garfish scales, Barthelat says, you’d best reach for a hacksaw.

That makes it ideal inspiration for flexible armors that can stand up to punctures and lacerations. Barthelat and his colleagues have tested the scales by taking dead fish from the market and driving a thin needle through their skin. They saw that striped bass—a more typical fish—had fairly sturdy scales. However, “When we did the same tests on the garfish we just couldn’t go through the skin,” Barthelat says. “The little needle would basically buckle and break.” They switched to a bigger steel needle, but still never managed to fracture the garfish scales.

Impressed, the team is now trying to mimic the gar’s thick skin. For now, they are focusing on the way the scales are arranged, rather than the material itself. They’re 3D printing plastic “scales” onto rubber pads and tweaking the size, spacing, shape, thickness, and other properties to see which ones perform best.

After trying out a few different arrangements, Barthelat and his crew discovered that the strongest armors were those most similar to real gar scales. They also observed that a bunch of smaller scales are harder to break than larger ones. Another key to success: scales that overlap, like those of most real fish. When these scales come under attack, they can distribute some of the force of impact to their neighbors. That’s an important property for an armor; if a predator’s tooth bears down on a scale so hard it presses into the animal’s soft, vulnerable skin, it would get injured even if the scale wasn’t punctured.

The team has now progressed to making ceramic scales and gluing them onto Kevlar gloves, which are often worn by people who have to handle sharp objects. “With the Kevlar gloves you can basically grab a kitchen knife by the blade without cutting yourself,” Barthelat says. But while it’s very hard to slice through these gloves, a small needle can still slip between the threads of Kevlar fabric. This is a particular hazard for workers who sort recycling or clean up parks, and might not see a needle before it has poked their hands.

“The best that technology has to offer now is something that does not protect them adequately for the type of work they’re doing,” Barthelat says.

His goal is to make gloves that can protect the wearer from punctures, but are still pliant enough to let them move the hands. “If we can solve the issue of bio-inspired design for gloves and the fingers, then we can pretty much handle anything on the body,” he says.

His prototypes are studded with aluminum oxide scales about 2 millimeters in size, although he plans to make smaller ones for the areas around the finger joints. The team uses a laser engraver to cut out the scales, then glues them onto the gloves. They are working with Superior Glove, an Ontario-based company that manufactures work gloves, to test their creations. The company could not perforate the gloves Barthelat’s team sent them using their standard tests, he says.

Still, even gar armor has its limits. Fish scales are adept at rebuffing punctures, but are not designed to stand up to a speeding bullet. So they aren’t the ideal lining for a bulletproof vest. Still, the scales might be useful for armors that would protect against stab wounds. People can wear armor to protect their torsos, but the neck is often left exposed. A flexible, fish scale-inspired armor might protect this vulnerable region, Barthelat says.

Many of nature’s toughest defenses are forged from a few simple ingredients. “The actual material doesn’t matter—it’s the way the material is built together in forming these architectures,” says Markus Buehler, a materials scientist at MIT.

That’s the case for the conch shells. Conches are a good inspiration for armor because their shells represent some of the strongest armors found in nature. These animals build impact-resistant homes that are 10 times tougher than nacre, or mother of pearl. But they’re made from weak materials—proteins with a consistency like Jello-O, along with brittle, chalky minerals. “They are able to utilize really simple building blocks that engineers wouldn’t even touch,” Buehler says. “We don’t build airplanes out of proteins or chalk.”

Unlike engineers, conches can’t go out and buy steel if they aren’t satisfied with the supplies they have on hand. So in the shells, these raw materials are arranged in intricate, three-tiered structures too small for the eye to see. “Jell-O’s very wobbly and the chalk, you take a hammer and it just crushes in a thousand pieces,” Buehler says. “But if you mix them in the right way…you can create something really, really tough that actually rivals engineered armor materials.”

Before 3D printing technology, it would have been impossible for researchers to physically recreate these tiny, complex structures, Buehler says. But he and his colleagues were able to print sheets of material that emulate the shell’s unique architecture, made from a rigid polymer and another, squishier one.

He printed sheets of material that were simpler than the real thing. “We took away some of the details that nature has invented,” Buehler says. “And we found out it matters a lot.” Similarly to the fish scales, the closer the construct was to natural armor, the better it performed. The conch-like pieces of polymer were harder to break in a drop tower test, which simulates the penetration of an object such as a bullet. The design is promising because it can both resist cracking and dissipate energy from an impact.

To make actual armor, researchers might swap out the polymers for ceramics or carbon fibers. By arranging them in a conch-like structure, we could improve on materials we already rely on.

These could be used in body armor or sports helmets. Today, Buehler says, our helmets are pretty simple constructs of Styrofoam and a hard shell. But with the conch-y design, helmets could be made thinner and lighter yet have the same sturdiness, or could perhaps stay the same weight but have better performance, Buehler says.

This armor could be personalized for your individual body type. Perhaps in future, Buehler says, you could have your skull scanned, and then a computer would design a conch-based armor or helmet that would be in precisely the right shape for you.

It would be pretty expensive to mass-produce these armors, though, Buehler says. Another possibility would be using simple ingredients like those found in actual conches to build armors. These could cut down on the cost and might be more eco-friendly, but we’d need special 3D printers that could actually manipulate an “ink” made from those materials, Buehler says. Or we could engineer microbes to secrete the shell material. Perhaps they would be able to make structures even closer to the real thing than our 3D printers can manage.

Spiders aren’t known for being heavily armored. Yet their silk has to be sturdy enough to capture prey, or help them dangle from your ceiling or sail through the air. A single strand of spider silk is strong enough to halt flying insects tens of thousands of times its own weight.

The silken strands are both very tough and very elastic, so they can absorb a lot of energy. That gives them an advantage over synthetic fibers like rayon and nylon that can stretch a lot but aren’t very strong, and others like Kevlar that are incredibly strong but don’t have much give, says Jon Rice, COO of Kraig Biocraft Laboratories in Ann Arbor, Michigan.

Researchers around the world are pondering how to make artificial spider silk and spin it into bulletproof vests. The U.S. Army has awarded a contract to Kraig, which is developing genetically modified spider silk to be stronger than steel.

The company engineers silkworms to carry a bit of spider DNA; this allows the insects to make spider silk protein instead of their own silk. Kraig is working with companies like Pennsylvania-based Warwick Mills to weave the silk into protective fabrics.

“No one would ever want have to have a spider farm—that’s one, creepy, and two, very inefficient,” Rice says. Spiders are cannibalistic, so they can’t be raised in close quarters. Besides, we’ve been harvesting silk from silkworms for thousands of years, and we know they are dedicated little silk-makers. In fact, forty percent of their body is dedicated to the silk gland.

A single filament of Kraig’s “Dragon Silk” is only 4 to 10 microns wide—thinner than a human hair. It’s also currently about two-thirds as strong as Kevlar, and 10 times as elastic, Rice says. A garment made from this “spider” silk would be breathable, biodegradable, and gentle against human skin. Plus it’s lighter and less dense than the armors we use today, Rice says, so the wearer would be less weighted down.

Today’s body armor often includes stiff ceramic plates; Kraig’s spider silk armors are designed to absorb energy, but also be stretchy enough to bend and allow the wearer to move around. Later this year, the company will be delivering sample packs of Dragon Silk to the U.S. Army, which will test it in the hopes of making bulletproof vests and blankets to protect people in an explosion. The silk could also be used in syringe-resistant gloves or high-end athletic wear. “They are luckily very few of us who need to have body armor, but there’s lots of us who are out running and exercising,” Rice says. Dragon Silk may infiltrate the realm of medicine as well; the ancient Romans successfully used spider silk to close wounds, he points out.

Eventually, he says, Dragon Silk could be produced at similar prices to other protective materials. The company has also created a few different designs of artificial spider silk; they could tweak it to be more elastic, or stronger, Rice says. That means they can make materials that are even stronger than natural spider silk. “Using nature as our starting point doesn’t always have to define our finished endpoint,” Rice says.