The Wolf’s Controversial Return To California

Public opinion is divided on how to manage the gray wolf. So what is a government agency to do? 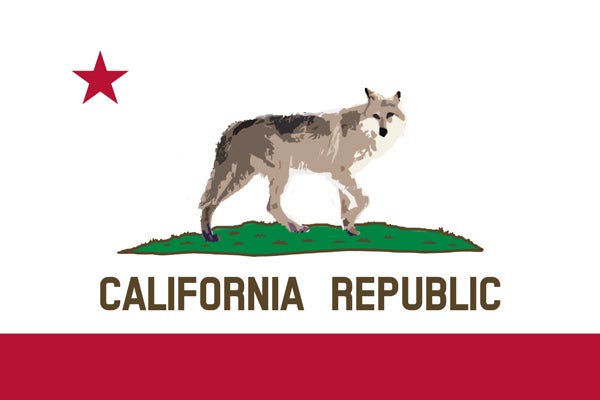 The gray wolf hasn't been seen in California in 90 years... until recently. Alexandra Ossola
SHARE

In 2011, a male gray wolf called OR-7 left his pack in Oregon and traversed over 1,200 miles. While this sort of travel isn’t atypical for gray wolves, the terrain that OR-7 covered set him apart from the pack; he became the first confirmed wolf in California in almost a century, making him an apple of the public eye.

Since OR-7 broke away from his group — the Imnaha pack in northeast Oregon — his life looks different. OR-7 traveled a small way back North and found a mate in the Cascades of southern Oregon. The Oregon Department of Fish and Wildlife (ODFW) has confirmed that the pair produced at least three pups, although there may be more.

But OR-7’s notable route to fatherhood has reawakened a debate in California that is almost as old as the state itself: how to manage the gray wolf. With OR-7’s wolf family knocking at California’s door, the state must make a plan for how to manage a species that inspires an entire range of emotions within California’s population.

“The public is fascinated by the issue of wolves in the West,” said Karen Kovacs, Wildlife Program Manager for the California Department of Fish and Wildlife (CDFW). “People have some perceptions of how wolves are that are oftentimes not compatible with the regulatory authorities of the states that manage [the wolf population].”

As recently as the 1970s, the West had no wolves at all. That’s a stark contrast to the 1800s, when settlers found their livestock populations constantly ravaged by wolves. In each state, extermination programs were put in place to ensure the total eradication of wolves; before 2011, the last confirmed sighting of a wolf in California was in 1924.

“The public is fascinated by the issue of wolves in the West.”

But after a small wolf population reappeared in Montana in the 1980s, the U.S. Fish and Wildlife Service (USFWS) was inspired to reintroduce an “experimental population” of wolves to Yellowstone National Park. The ecosystem there, it appeared, was out of balance without wolves at the top of the food chain: elk populations were out of control, and overgrazing drastically reduced the amount of vegetation. The flow of rivers had even changed, as barren river banks eroded more easily.

Much of the public was enamored with the idea; a 1985 survey of visitors to Yellowstone National Park showed that three quarters of those polled were in favor of reintroducing wolves. And since then, the praise has only become more frenzied. Videos and op-eds abound singing the wolf’s praise, calling it a keystone species and “an American hero.”

But not everyone was so happy. A small group of dissenters — especially farmers — were very much against the plan, believing their livestocks would be targeted by the new predator. An intense public debate ensued, but after a nearly decade-long fight, the U.S. Secretary of Interior signed the decision for the reintroduction of gray wolves to Yellowstone; wolves were then captured in Canada and transported to the national park.

Since wolves’ reintroduction, studies have shown they’ve had a mostly positive impact on the ecosystem: “Preliminary data from studies indicate that wolf recovery will likely lead to greater biodiversity throughout the Greater Yellowstone Ecosystem,” according to the National Parks Service page. The experiment has also led to their proliferation, as wolves are now found throughout Colorado, Washington and Oregon. Biologists keep track of wolf populations with radio collars, and they gather DNA (usually in the form of scat, or feces) to trace wolves’ lineages. Each state has created a unique management plan to keep the wolf population at a level where both wolves and their human competitors can thrive. Many states have decided to list the wolf as an endangered species, which gives it a unique level of protection.

Even before OR-7’s arrival in California, the state had been formulating its own management plan for the species, combing through plans that had worked elsewhere as well as its own historical data. But California is no Yellowstone, Kovacs noted. “When you bring in a creature that was extirpated 100-plus years ago, where you’re bringing it back is nowhere near the same as when it left,” she said. “Where you have wolves in California, you have them on public and private land.”

This “mosaic” of natural and altered landscapes means that wolves can’t exist untouched in California. They’re constantly elbow-to-paw with humans, which could threaten them both. “Trying to take what we learned from a large national park to California may not be the right kind of comparison,” she added.

OR-7’s arrival (and subsequent celebrity) meant that the public needed to be involved in California’s new management plan. But, as Kovacs and her colleagues rapidly learned, “the issue around wolves is about so much more than wolves.”

People enchanted by the idea of wolves tend to be those who usually don’t have to come into direct contact with them, Kovacs noted. Some have started a grassroots campaign to rename OR-7 “Journey,” and the nonprofit Wild Peace Alliance has created a trek for nature-loving fans to retrace the wolf’s steps. The California Fish and Game Commission in Fortuna, California, convened earlier this summer to discuss listing the gray wolf as an endangered species. The meeting brought out some particularly vehement supporters: the “passionate and at times tearful testimony” crescendoed when “some in attendance wore wolf costumes, and one commenter broke into an a cappella ode to wolves,” reads a June story in the Los Angeles Times. The panel decided to list the species as endangered, contrary to a previous recommendation by the CDFW.

Although they may be less creative in vocalizing their opposition, the constituents with livestock threatened by wolves are just as passionate about the population’s strict control. Wolves threaten their livelihood, and conflicts are inevitable. Some plans have suggested human control of wolf populations by allowing wolves to be hunted for sport, a practice that many wolf supporters find abhorrent. And because the California landscape has drastically changed since wolves were last on it, Kovacs and her colleagues aren’t convinced that the ecological changes that wolves cause will all be positive from a human perspective.

CDFW hopes that giving constituents a voice in the wolf management plan will help the agency find a middle ground in a minefield of emotions and opinions. As ODFW has learned, the middle ground is the only option. “We would never have been successful if we were trying to manage these animals from a polarized perspective,” said Russ Morgan, Wolf Program Coordinator for the state of Oregon. “When you have an animal that has some of those social strings attached to it, an ability to work in the middle area is really key.”

Since OR-7 has settled in Oregon with his mate and pups, it’s unlikely that he’ll cross over into California again, Morgan said. But if — or when — wolves return to California to stay is anyone’s guess. “Wolves were in California natively, and OR-7’s travel to California, although it was brief in the larger scope, means that wolves can be there,” he said. Morgan was reluctant to use the word “inevitable” to describe wolves’ return to California, but he agrees that CDFW is smart to plan ahead.

As the USFWS considers delisting the gray wolf nationally, California’s listing and management plan could tip the scales. “Ultimately it’s our plan, and we want to see if we can reach a consensus on the likely contentious issues,” Kovacs said. She and her colleagues are expecting a lot of debate when the plan is released for public comment early next year. “The public is captured,” she said. But what that means for wolves in California remains to be seen.

Read more of PopSci’s coverage of the gray wolf.

Correction (8/13/2014, 5:00pm ET): The original story misstated the names of the California and Oregon Fish and Wildlife Services. They should be the Departments of Fish and Wildlife and have been corrected. We regret the error.