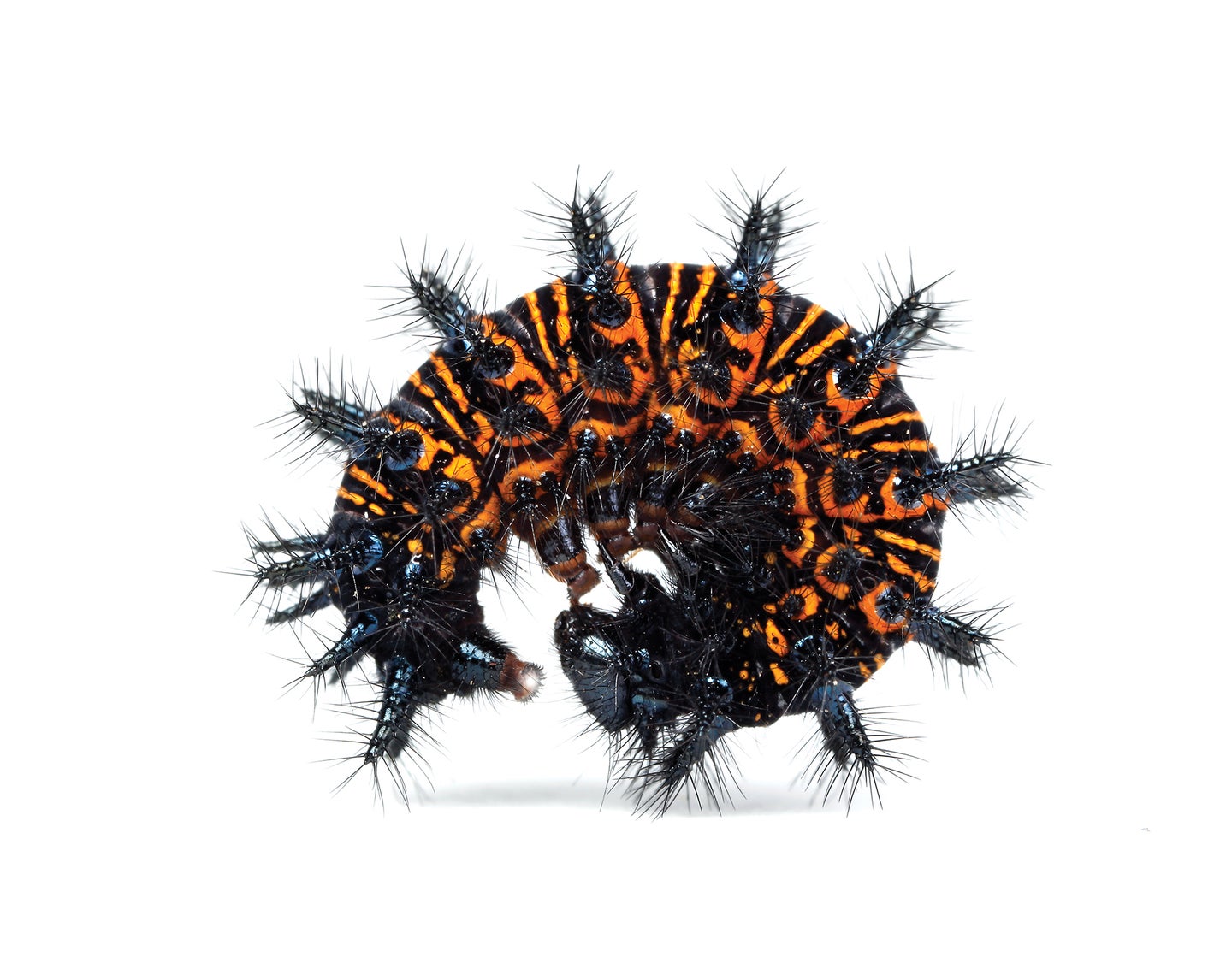 Baby moths and butterflies pull off some wild adaptations to dodge detection. Sam Jaffe’s photos give us a closer look.

CATERPILLARS ARE masters of deception. Some imitate sticks and leaves to avoid becoming lunch. Others flash bright colors to convey their toxic nature. A few even wave pumped-up limbs to frighten foes. Despite such impressive maneuvers, humans tend to overlook these wee wonders. But they rarely escape the eye of Samuel Jaffe, an entomologist who’s spent his life uncovering their anonymous exploits, a fascination that began when he was a kid collecting the critters near his Massachusetts home. Before long, Jaffe started photographing them. In 2013, that project blossomed into the Caterpillar Lab, an education center in New Hampshire with thousands of live specimens. The nonprofit’s scores of caterpillar close-ups provide a fascinating glimpse of the secrets hiding in backyards everywhere, just waiting to be found.

Studying caterpillars can reveal other minutiae of the natural world. For example, this polka-dotted larva’s favorite food, the pink-flowered white turtlehead, has grown increasingly scarce along the East Coast. That’s prompted Euphydryas phaeton to dine on its distant cousin, English plantain, which suggests the flora are more closely related than believed.

These aptly named insects live on only a few coniferous species and blend into the barbed texture of the branches with their spiky horns. Jaffe believes the shiny spheres atop Citheronia sepulcralis’s crown could also mimic dripping sap. Its reliance on pines, however, makes it vulnerable to deforestation.

Nematocampa resistaria sports four odd tentacles that fill with fluid, swelling large enough to send pursuers running. The critters inhabit yards across the US and look a bit like spiders as they dangle on silk threads, freezing in spooky poses to further deter predators.

The young Glaucopsyche lygdamus, which will become a cerulean butterfly, defends itself against wasps and other threats with a security detail of ants. Some varieties of the species feed their guards sugary drops to keep them around. Others excrete a cocktail of chemicals that makes the trusted servants abandon their queen and colony.

This scrappy city dweller carries its pupal shell throughout its larval stage, adding bits of food, poop, and silk to form a cocoon that can reach the size of a pine cone. Once that’s complete, Thyridopteryx ephemeraeformis tucks itself inside for seven to 10 days for its transformation into a brown, furry moth.

While it may look like a fluffy ball of yarn, the orange-splotched Euchaetes egle signals danger to birds that might otherwise try to chow down—and for good reason. The caterpillar, like the beloved monarch butterfly, absorbs the poisonous cardiac glycosides in the milkweed leaves it eats.

In a vivid display of adaptation, Heterocampa umbrata caterpillars change their skin tones to blend in. This one has a pinkish hue to help it fade into the forest floor. Jaffe has seen more green specimens during wet, cool summers and larger numbers of red and other shades in hot, dry conditions.

Exyra fax spends its entire childhood inside one of its boggy namesakes. It hatches in the carnivorous flower, slurps up the plant’s acidic digestive fluids to fuel its growth, then spins silk to seal the abode and continue feeding on leaf tissue. Some may move on to new hosts and hibernate through winter before completing their life cycle in the spring.

When Tecmessa scitiscripta feels threatened, it expands the colorful tentacles located on its last row of limbs by more than half the length of its body. The little critter then flails around, almost as if it’s throwing a fit to scare off hungry birds, Jaffe says.