Spiders usually produce the strongest threads of all the silk-making animals. 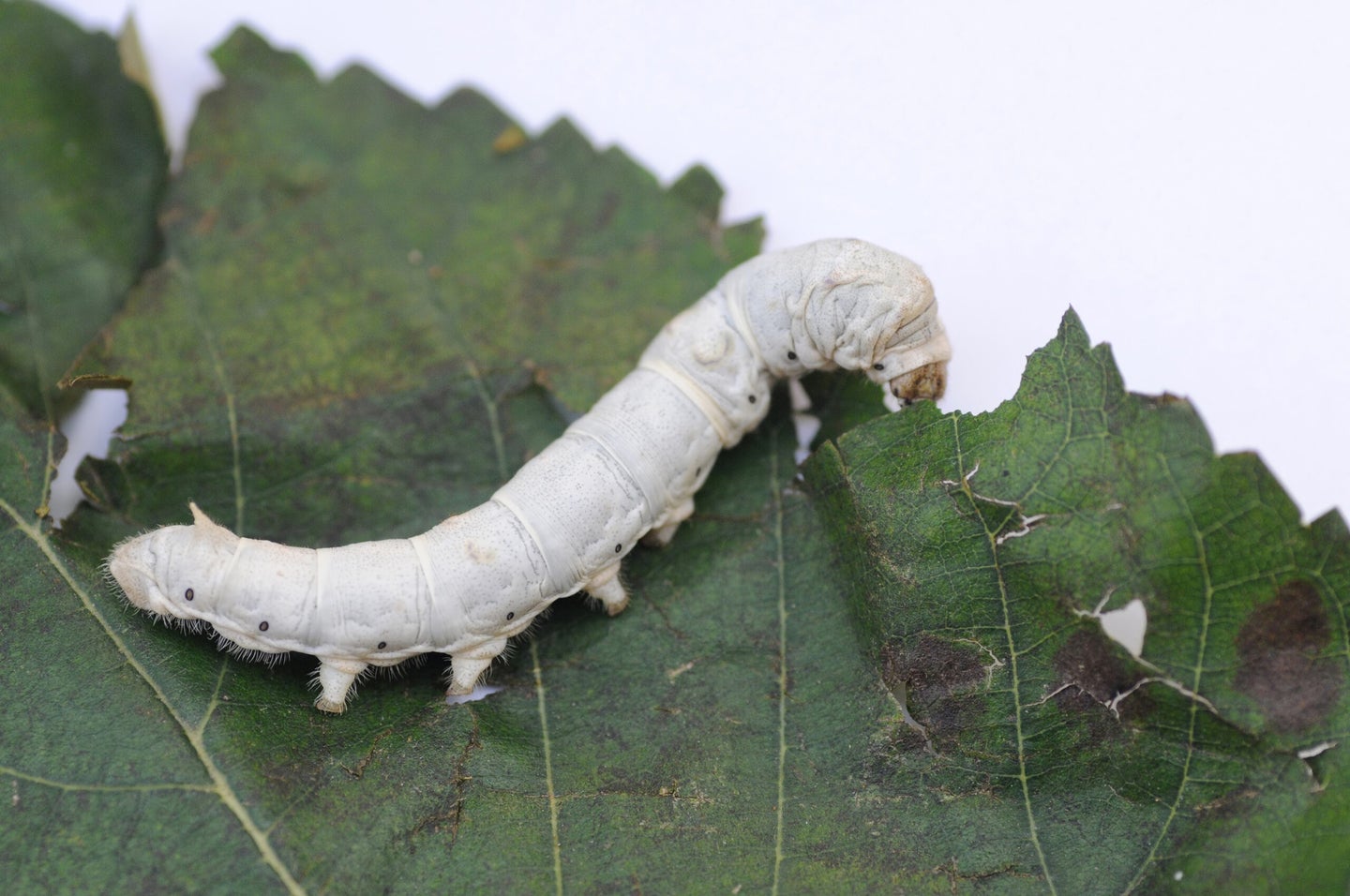 Silk is a fabulous fabric, but it’s also a material that can do so much more. At its best, silk can hold up even better than steel when you pull at it. If you can get enough high-quality silk, you might think about making silk body sensors and silk body armor.

But therein lies the problem. Getting enough silk is difficult.

Spiders make the strongest silk that we know about. Unfortunately, spider silk is hard to come by—it’s certainly very hard to get enough for most uses, unless you find an alternative that doesn’t exist yet. But scientists may now have done just that, in a paper published in the journal Matter on Thursday, by tweaking the weaker but far more common silkworm silk to have properties even stronger than spider silk.

“We hope that this work opens up a promising way to produce profitable high-performance artificial silks,” says Zhi Lin, a biochemist at Tianjin University in northern China and one of the paper’s authors, in a press release.

The worms of the domesticated silk moth, Bombyx mori, are by far our most prolific source of silk. Humans in what is now China seem to have domesticated silkworms some 6,000 years ago, and what they wove from the animals’ fibers would become renowned the world over as a luxury good. Silk gave its name to the Silk Road, a network of trade routes that connected peoples and cultures across old Eurasia for centuries. Silk was even involved in the earliest recorded case of industrial espionage, when two Byzantine monks supposedly smuggled silkworms west along the Silk Road by hiding them in hollowed canes.

But even in premodern times, we knew that silkworms don’t necessarily make the best silk. Worms create their silk to form cocoons. That’s generally great for weaving into textiles, but to really get those resilient properties, it isn’t enough. (Silkworms also don’t make very much of it—just one pound of silk requires hundreds of silkworms, and collecting it is often fatal to the worms.)

[Related: Jumping spiders might be able to sleep—perchance to dream]

There’s a whole menagerie of animals who can make silk—carp, mussels, many insects, and much more—but the strongest silk comes from spiders. A spider can make several different types of silk, depending on the task at hand: one type for making egg sacs, for instance, and another for securing prey.

The strongest of them all is called dragline silk, which spiders spin for the most important lines of their webs. It’s also the silk that spiders dangle from. At its best, dragline silk can match high-grade steel in tensile strength: how much a material holds up when it’s pulled or stretched.

If you’re wondering why engineers aren’t yet crafting bridge cables from spider silk, there’s a major problem. There just isn’t very much spider silk to go around. “We always have to fight to get more of it,” says Hannes Schniepp, a materials scientist at the College of William & Mary in Virginia who wasn’t part of the new paper, and whose lab studies the ribbon-like silk of the venomous brown recluse spider.

More than a decade ago, textile-makers used the silk from over a million spiders to weave a single 11-foot-by-4-foot cloth. Getting a million spiders is no small feat, especially because it’s very difficult to domesticate them: They’re far too territorial and aggressive.

There may be ways to make silk without animals, but scientists have yet to perfect any of them. A few startups are now trying their hand (or, perhaps, their spinneret), but despite bold promises of plentiful spider silk, their products don’t quite match all of the organic article’s impressive properties.

Scientists have tried a number of tricks to match what spiders can do. A very 21st-century idea involves inserting spider DNA into silkworms. Recently, to that end, scientists from a number of Chinese institutions joined forces to map the Bombyx mori genome. But it hasn’t yet led to effective artificial silk.

The scientists behind this latest paper took a different approach: spinning the silk from worms as a spider might.

Silkworm silk typically consists of protein fibers sheathed in a glue-like substance. That glue helps the silk fibers stick together in cocoons, but it’s an impediment to spinning it. So it had to go. The researchers did so by bathing the fibers in an acid called HFIP, a substance that organic chemists often use to dissolve proteins.

The process injected the resultant fibers into another bath, this one filled with zinc and iron ions that joined to the silk and strengthened it. Within that bath, the researchers used a custom-built machine to spin the strands, stretching each out to three times its original length.

After drying the threads, the researchers were left with silk that didn’t just match spider dragline silk in tensile strength. It went beyond. In testing, they found that the silk they’d just created—identical to spider dragline silk in appearance—was 70 percent stronger. It was also more than twice as strong as a silkworm’s natural silk, stripped of its glue.

[Related: Spider silk proteins could be the key to future cancer therapies]

The process, according to Schniepp, isn’t entirely new. Silk-scientists have been tinkering with ways to refine the properties of silkworm silk. But they’ve never been able to create “a silkworm silk that outperforms spider silk—that is definitely not something that I expected to be, in a way, so easy,” Schniepp says.

This approach won’t solve all the problems behind making silk in bulk. You’d still need to get your silk from silkworms, rather than growing proteins in a lab, as some attempts seek. HFIP, moreover, isn’t really suitable for mass production; it’s both expensive and quite toxic.

But scientists say this experiment could, ultimately, be a thread for researchers to follow.