Plus, how these weather predicting skills could save them from poachers 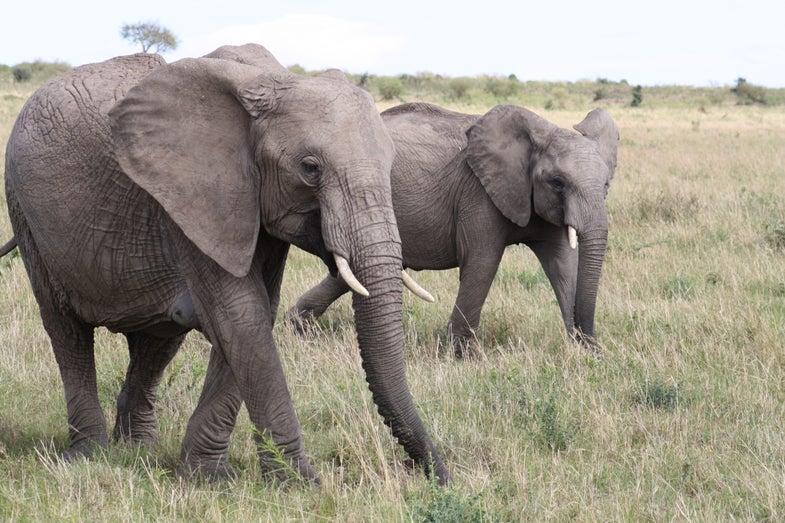 Lions may be the kings of the animal world, but at least elephants could make for spunky meteorologists. New research is revealing that elephants have a radar-like spidey sense, capable of detecting an approaching rainstorm up to 150 miles off.

While this may seem like an impractical talent, researchers say elephants’ weather-predicting could help human conservationists save the animals from poachers.

The elephants’ abilities are rooted in their excellent hearing skills. Elephants can hear sounds at very low frequencies, even those below the human range of hearing. It’s one of the ways they communicate with each other. Thunderstorms also produce low-frequency sound, whether it’s a thunderclap or the pitter-patter of rain hitting the Earth. Scientists aren’t sure which element elephants are listening to, but they know the animals are detecting some signature component of oncoming rain.

An international team of researchers uncovered this uncanny ability after analyzing elephant migrations in the Namibia. “The elephants undergo these sudden migrations that previously have not been explained,” Oliver Frauenfeld, a geology professor at Texas A&M and an author on the study, tells Popular Science. “They’ve been observed to change the places they go and the speeds they go rather quickly.” Frauenfeld and his colleagues were hoping to figure out if an environmental trigger was to blame for changes in the herds’ movements.

“If we’re better able to determine where the elephants are and where they might go, wildlife officials can monitor the elephants better and make them safe from poaching.”

The researchers plotted the herds’ movements for a period of seven years, and sure enough, they found that the elephants kept changing course during the region’s rainy season. They used GPS tracking data for nine elephants that carroed receivers. Each elephant belonged to a different herd in the area.

In Namibia, it’s mostly hot and dry all year round, but there is a distinct rainy period from January to March. During this time, the researchers observed that the elephants could “sense” thunderstorms that were hundreds of miles off, seemingly predicting rain days before it occurred. The herds would then change their directions to meet the oncoming storms.

“They need the rain,” Fraunfeld explains. “After a prolonged dry season, once the elephants hear the rain, they start moving towards it, and it allows them to get the water sooner.” He also notes that knowing how elephants move could help with conservation efforts. “If we’re better able to determine where the elephants are and where they might go, wildlife officials can monitor the elephants better and make them safe from poaching.”

The researchers published their findings in the journal PLOS One.