Krill love to stick together in swarms. In a new book, Ashley Ward writes about how these massive social bubbles keep ocean life afloat. 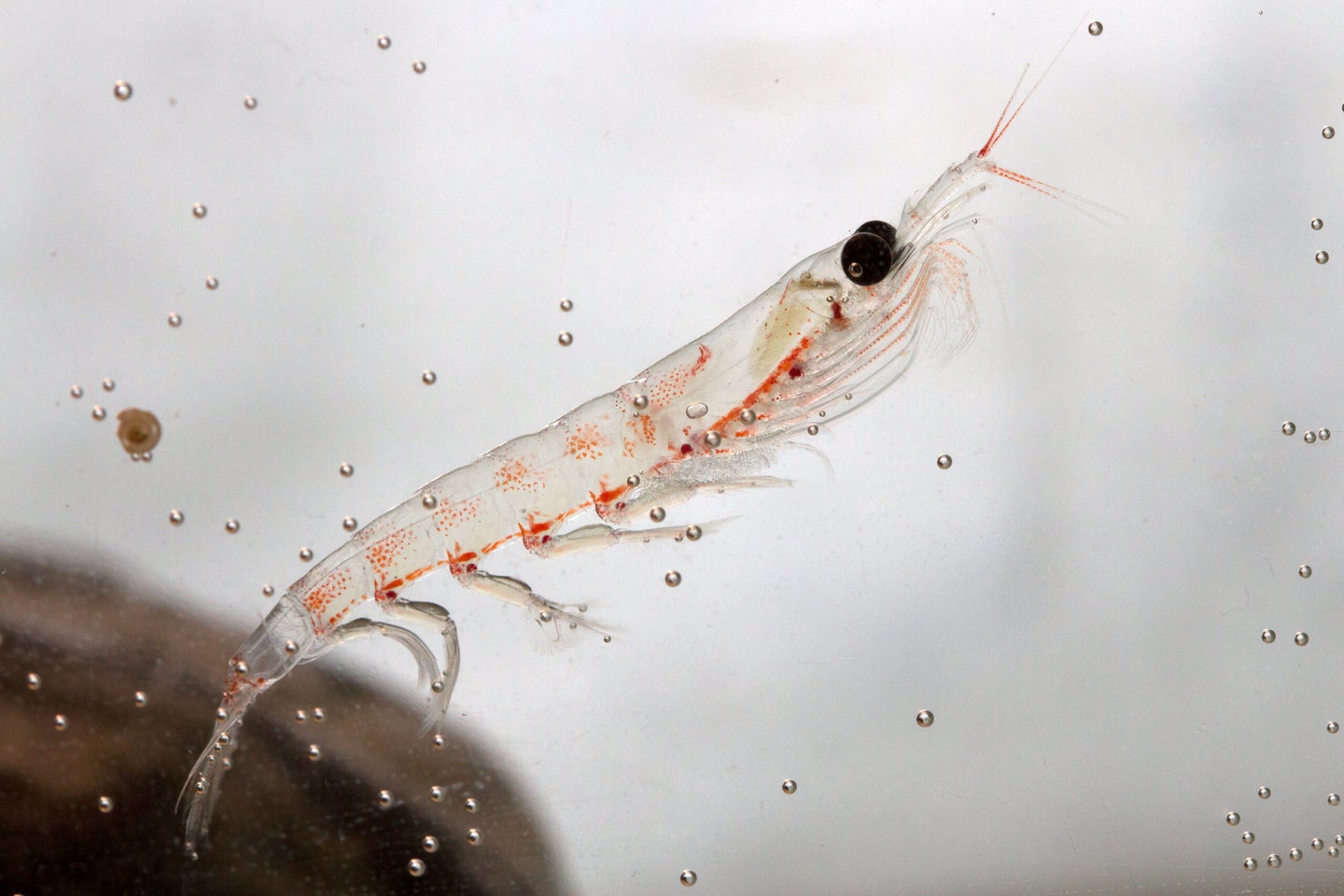 The life of an Antarctic krill is surprisingly social. Deposit Photos
SHARE

Excerpted from The Social Lives of Animals by Ashley Ward. Copyright © 2022. Available from Basic Books, an imprint of Hachette Book Group, Inc.

The leopard seal and a whole host of other large marine predators are drawn to the Southern Ocean to hunt. Whether directly or indirectly, what supports these animals is krill, small but superabundant crustaceans related to prawns. In fact, there are something like 85 different species of krill spread across all the world’s oceans. But the one that most people think of when they hear the word is the Antarctic krill. For every person alive today, there might be ten thousand of these creatures in the near-freezing southern seas. Even though each one is only about the size of your little finger, collectively they outweigh us.

Krill are a “keystone species” in the Southern Ocean. This ecological term derives from the crucial role of the keystone at the apex of a stone arch. Take the keystone out, and the arch collapses. So it is for krill in relation to the animals with whom they share their habitat. From fish to squid, from penguins to albatross, and from seals to the great whales, krill are at the top of the menu. Many of these predators have diets that are more than 90 percent krill at certain times of the year. If krill disappeared, they’d take the bulk of Antarctica’s most charismatic and important species with them. For the predators, switching their diet to a different prey species is simply not an option; without krill, there would be no Antarctic ecosystem as we know it—no baleen whales, no seals, no penguins, no albatross, and none of the animals that feed on those that eat krill.

Numerous though they are, Antarctic krill are not invulnerable. Twenty years ago, on the other side of the planet, a change in oceanic conditions in the Bering Sea drove the development of a massive algal bloom. Good news for these algae-eating crustaceans? Not at all. It was the wrong kind of algae for the resident Pacific krill, the sister species of the Antarctic krill: they couldn’t eat it. Their population crashed, and with them went enormous numbers of seabirds. Salmon failed to show in the rivers, and the emaciated carcasses of whales washed up on shores. The devastating knock-on effects of the slump in Pacific krill foreshadowed what could happen if Antarctic krill were to go the same way.

For now, they are thriving. Drawn together into great aggregations, Antarctic krill can be seen from space when they gather together. A single superswarm might cover more than 100 square miles of ocean, staining vast swaths of the surface waters orangey pink as they cluster in their trillions. Congregating provides krill with some protection from predators and may even help keep them afloat. Since they are heavier than the surrounding water, they start to sink the moment they stop swimming. Yet, by gathering together, they are buoyed by the upwelling currents that result from the countless pulsing limbs of their fellows pushing water downward. The swarm is essentially krill’s life-support system.

Although we often think of invertebrates as instinctive creatures, devoid of any but the most basic responses and reactions, krill exhibit a fundamental trait shared by all social animals, including us—they hate to be alone. If they’re isolated, they react badly. It’s hard to know what panic might look like in an animal that doesn’t have a face, as such, but we can measure something akin to it by looking at what is going on inside their bodies. And since krill are largely transparent, it is possible to do this without too much difficulty: we can see their tiny hearts beating. Separated from the multitudes in the swarm, a krill’s heartbeat quickens. Krill show a similar response if they detect that whales are around. A raised pulse is a basic sign of stress. Clearly, they prefer company.

Nature documentaries rarely feature krill, but when they do it is as fall guys. We might get only a fleeting glimpse of these small crustaceans, usually portrayed as obliging little floating morsels as they’re swallowed by a leviathan. Krill, in other words, are little more than whale food to TV producers. But there’s much more to them than this. For one thing, they are far from sanguine about disappearing down a whale’s gullet. Despite the numbingly cold waters in which they live, they have surprisingly fast reactions when danger threatens. It takes only around 50 milliseconds for an alarming event in the krill environment to trigger an escape response in them. To put that into context, that’s about twice as fast as the reaction of an Olympic sprinter to a starting pistol. The escape response itself is dramatic—in the crucial first second following the detection of a threat, the krill may travel over a meter. Again, compared to a human sprinter, and scaling the krill to human size, that means that the krill would finish the 100-meter race in under two seconds. With a little warning, krill can even elude the cavernous maw of a feeding whale.

In short, catching them isn’t as easy as you might think, even for the largest mouths on the planet. Challenging the common notion of whales simply turning up and harvesting the krill, a recent study of humpbacks in the endless days of the Antarctic summer showed the effort they have to put into feeding. The whales lunged at the swarming crustaceans every 15 seconds or so, minute after minute, hour after hour. With every mouthful, many krill are captured, but still more dart out of the way, leaving the feeding whales short-changed. It’s exhausting work for the whales to satisfy their enormous appetites.

But while krill are first-class escapologists, it is their swarming that encourages the whales to focus their attention on them. So why do they collect in such vast numbers? The answer is that the krill are pursued by many different predators and swarming provides an excellent defense against most of them. Any predator that relies—as most do—on picking out their victims one by one faces a kind of sensory overload when confronted by myriad swirling krill.

The little crustaceans have another trick or two up their sleeves as well. According to one account, krill faced with an onrushing predator, such as a fish or a penguin, sometimes spontaneously shed their skins. Anticipating its moment of victory, the predator clamps down on what is now no more than the hollow shell of the krill’s body, while the intended victim races to safety. Another oddity is that krill are able to light batteries of bioluminescent cells on their undersides. As yet, no one is certain whether this serves as a means of communication among one another or is used instead to confuse attackers with a pulse of light, or perhaps it breaks up the outline of the krill swarm in the ocean depths when they are being attacked from below. Whatever the reason, the light show certainly adds to the mystery of these engaging little creatures.

Although the interactions between whales and krill are very much in the mold of a predator-prey relationship, it’s not entirely a one-way street. To illustrate, we can look at how whaling affected krill. Whalers killed some two million whales in the Southern Ocean in a period of just 55 years, between 1915 and 1970. In almost every food web, when you remove a key predator, the prey, freed from persecution, flourish. But this didn’t happen for Antarctic krill. According to some estimates, the krill population declined alongside the whales. The explanation for this oddity is that being whale food helps the krill thrive. Whales eat a colossal amount of food—for blue whales, as much as 4 tons per day—and what goes in must come out. Whales typically crap near the surface of the ocean. If you’ve ever lain awake at night wondering what whale shit looks like, allow me to enlighten you: they don’t produce a great whale-sized log; it’s much more of a massive, explosive, nuggety cloud of Brown Windsor soup. This is something I learned as I watched from a boat, with an exquisite mixture of delight and horror, as a snorkeling colleague of mine became engulfed in one such gargantuan cetacean bum detonation. In any case, the bits and pieces within the terrible cloud are buoyant and remain near the surface of the water. Whale turds are full of nutrients, such as iron, phosphorus, and nitrogen, which in turn are manna for the minuscule plants—phytoplankton—that the krill eat. So the whales and the krill are bound in an ecological cycle, the success of one supporting the other.