The species lived when dinosaurs and mammals were just getting started. 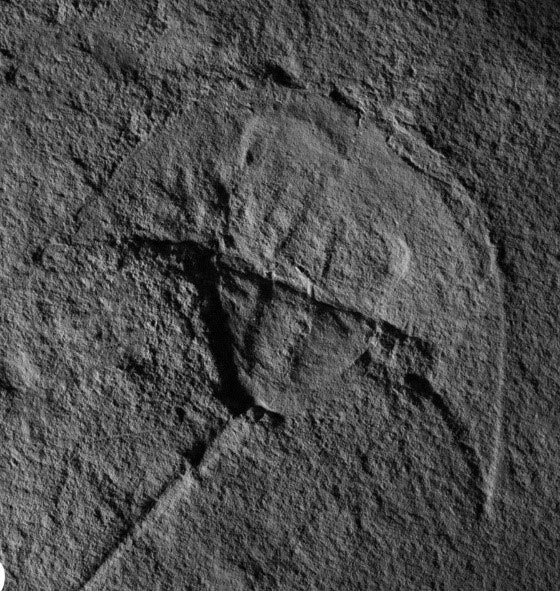 A long time ago, in a watery area not so far away… dinosaurs were just getting started, and a horseshoe crab that looked an awful lot like Darth Vader’s helmet was chilling in shallow waters on Idaho’s coastline (yep, 245 million years ago, Idaho had a coast.)

In a paper published in the German journal Neues Jahrbuch für Geologie und Paläontologie, paleontologists identify a 245-million-year-old fossil as a new species of horseshoe crab they dub Vaderlimulus tricki.

For what it’s worth, it’s not the first time that someone has noticed that the dome of a horseshoe crab’s shell looks kind of like Darth Vader’s helmet. It’s not even the first time that a species has been named after this particular Star Wars character. This crab joins houseflies, wasps, a slime-mold beetle, an Australian mite, and an ant in being named after Darth Vader.

Why so many Vaders? And while we’re at it, why are oh-so-many animals (and plants and fungi and bacteria) named after famous people?

Well, I’m writing about it, and you’re reading about it. There’s your answer.

If this ancient fossil hadn’t had quite such a cool name, would you want to know more about the critter? Maybe you’re a huge horseshoe crab fan, and you’d be 100% excited even without a pop culture reference. But maybe you’re just a huge Star Wars fan, and you want to get your fix before the next movie comes out. Either way, that’s ok. These species names are basically taxonomical clickbait, which garner newly-discovered species a little attention. But that doesn’t mean they don’t deserve it.

This particular Vader was named when the daughter of one of the authors noticed the resemblance between the horseshoe crab and the Sith-Lord-formerly-known-as Anakin Skywalker’s helmet.

This specimen belongs to a long-extinct family of horseshoe crabs that lived in the Triassic called Austrolimulidae. The family was first identified by a single fossil found in Australia and described back in 1955.

These horseshoe crabs (not actually related to crabs) had what paleontologists consider to be bizarre shapes for horseshoe crabs today. They think that’s because these animals, unlike their modern salt-water-loving relatives were experimenting with living in fresh or brackish water. It didn’t work out.

Today there are only four species of horseshoe crab living in the world, and they’re not having the easiest time of it. Some are perishing in mass die-offs that biologists are still struggling to understand. Others are serving as involuntary blood donors to the medical industry, with their valuable blue blood used in life-saving medical tests. It’s rough out there for a horseshoe.

But these critters have weathered five mass extinctions in their 450 million years on Earth. Some, like Vaderlimulus tricki, only lasted briefly, but their distant relatives were more resilient. Now, all they have to do is survive humans.

Luckily, if you live near a coast, you can help them out. These animals have trouble turning themselves over if they land on their backs. If you see a modern horseshoe crab stranded on its back, flip it over and help it get on with it’s life.

And if you see a horseshoe crab fossil out in nature, call a paleontologist or a natural history museum. Fossils like Vaderlimulus tricki are incredibly rare, and you could help discover something completely new. And who knows, maybe you’ll even convince scientists to name it after your favorite villain.