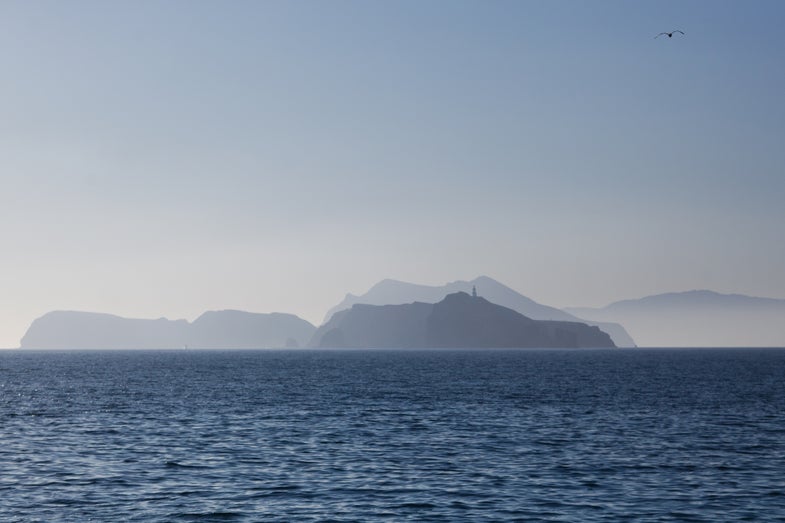 The Channel Islands, usually visible from shore, are clouded with smoke from the fire. Deposit Photos
SHARE

The Santa Barbara Channel, an 80-mile-long stretch of the Pacific Ocean just off the coast of southern California, is one of the most diverse and vibrant ocean ecosystems in the world. On Saturday, a team of scientists led by Kelsey Bisson and Nicholas Huynh, doctoral students in oceanography at the University of California at Santa Barbara, will board the research vessel Sally Ride and set off on a week-long expedition to study the organisms living there.

The original plan, in the works since last January, was to go into the channel and track the hour-to-hour changes of organisms, like bacteria and plankton, in the water. “It’s usually just sampled once a month, but that masks the variability of the ocean,” Bisson says. “We wanted to sample things more on the scale of how they actually happen.”

But a few weeks ago, the Thomas wildfire started scorching the Santa Barbara area. When Bisson and her collaborators watched smoke fill the air and cut off their view of the islands, usually visible across the channel, and saw satellite images of ash falling into the ocean, they decided to make a last-minute change to their expedition.

“We decided to supplement the cruise to answer questions about the effect of ash on the ocean environment,” Bisson says. “To the best of our knowledge, this has never been done before.”

It’s jarring to hear, Bisson says, that these extreme fires could be the new normal in California. That’s part of the reason it’s so important to understand the way the ocean reacts, she says. “The ocean’s health supports so much of our livelihood,” she says. “This type of research helps so we can predict and plan and do our best to understand how fire affects the systems that we rely on.”

Bisson and the team want to see how the organisms in the water respond to different amounts and different kinds of ash, and understand if the ash changes the types of organisms who are able to live in that water. On the boat, they’ll compare samples of seawater from the surface, which has high amounts of ash, to water deep down. They’re also planning to gradually add ash to collected seawater, and examine the effects—Ellie Arrington, another scientist in the group, drove around Santa Barbara last week collecting ash in jars to use in those experiments.

We’re doing experiments today to see how the ash affects the absorption properties of seawater. ??The ash is the same size of the phytoplankton and it dominates the signal. Thanks @elliearrington for collecting all of this ash!!

“The ash has organic matter in it, and chemicals from burning houses and cars,” Bisson says. “We’ve sent some of it out for analysis, which can tell us the the range of chemicals and their compositions found in the ash, so we know what’s actually going into the sea water.”

Many of the species of plankton that live in the channel are dependent on light, says Sasha Kramer, another doctoral student on the team, and the smoke from the fire is blocking out the sun. “That will probably change their dynamics,” she says. “We don’t have a baseline from before the fire, so we can’t compare that to what we’ll see after a week of smoke cover, but it’ll still be interesting to see.”

Small organisms like plankton and bacteria are the base of the food chain for other, larger animals, Bisson says, so understanding their properties is critical to an understanding of the entire ocean.

Because theirs is the first project to specifically look at wildfire and the ocean, Bisson and Kramer say they have no idea what they’ll find. The closest point of comparison is research done on the effect of volcanoes, which also spew smoke and ash, on the ocean.

“I think it’s a cool thing that we don’t have any expectations,” Bisson says. Previous studies found that dust blowing into the ocean has a high concentration of nitrates, which would help the plankton, she says. “But dust is very different from ash, and ash is burned from materials that are potentially hazardous.”

Bisson says the team applied for grants from the National Science Foundation, which has funding available for research in quick-moving emergency situations, like hurricanes and fires. “If they don’t happen, we’ll do it with limited money.”

When the team boards the ship in San Diego on Saturday, they’ll get to work prepping experiments and transitioning the vessel into a laboratory. Then they sail down to Santa Barbara. Because the fire has been changing so much, Kramer says, a lot of the work they do will be informed by what they see when they get there.

“We’ve been working really hard for the past year to get this together, and having it blow up in our faces is a new level of excitement,” Bisson says. “We’re not excited that the fire happened, but even though it’s a terrible thing we’re going to use it to learn as much as we can.”