How do we enjoy nature without destroying it? 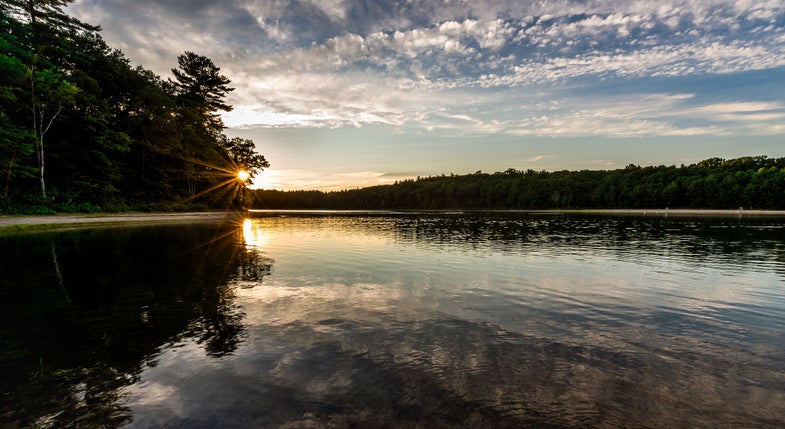 The drive to Walden Pond is more suburban than you expect. It’s still quaint, especially if you meander through central Concord, where the shops at least provide the illusion of a historical New England town. Your car takes you through some woods, interrupted by a high school, and then through more woods. And just as you feel you must be getting close—finally approaching the hallowed place where famous naturalist Henry David Thoreau went to live in solitude—your drive is interrupted by a vast swarm of vehicles.

These people also want to see Walden Pond. And because you all want to experience the same transcendental sanctity Thoreau once described, no one will.

The Walden everyone’s here to see is the one we picture when reading Walden, or perhaps more commonly the one we imagine based on the few quotes we’ve heard from someone who’s read Walden. Thoreau’s tale of living simply by a quiet pond far from bustling Boston evokes a kind of pastoral beauty that few of us get to experience on a regular basis. We’re all just trying to get our slice of it.

But like so many of this country’s natural wonders, humans are ruining Walden Pond. We compact dirt with our shoes and break branches as we pass and pick flowers for our own amusement. We damage fragile algal ecosystems because we want to swim in the water. We pollute the air with our cars. We spread sand to form a strange, unnatural beach.

A new study in PLoS One details the myriad ways humans have changed Walden Pond’s natural state since the mid-19th century. Erosion from trekkers on their way to Thoreau’s cabin, combined with the nutrients tracked in by swimmers and the manmade pathways we’ve created around the pond, have radically changed the ecosystem in the last 150-odd years. The authors write that “like many other lakes around the world, Walden Pond has instead moved to a new ecological state that is unique in the last 1800 years if not the entire post-glacial history of the lake.”

It’s just the latest evidence that the nature we’re all seeking gets ruined by all the people seeking it. Our national parks—not just our local ponds—are overrun with humans, and those humans bring trash and destruction with them.

Just look at Yellowstone. Old Faithful, the enormous geyser that erupts every 60 to 100 minutes, should be a spectacle. It should inspire awe of the geologic forces coming together in this strange, wild place to blast a fountain of hot water 184 feet in the air. But try going today and your view will be interrupted by the wall of cameras, iPads, and phones held aloft as hundreds of people all try to take a crappier version of a photo they could have seen online. No one in the crowd will appreciate this moment. They’ll just reminisce about appreciating it later. One Yale University researcher who’s studied Yellowstone for years told The Guardian that it was now “more like going to a carnival” than to a national park.

Visit the Mariposa Grove in Yosemite and you’ll find the peaceful solitude of a vast stand of towering sequoias blasted away by a swarm of people, or perhaps a tram (lest you have to trek through the nature you came to see). Everyone wants to glimpse the biggest trees—the famous ones. They want a photo showing how tiny they are in comparison. They want to climb on the overturned tree, with its roots splayed out like a halo, and most of all they want a photo of them climbing in front of the sign that says “please do not climb on fallen trees.”

The same thing happens all over Yellowstone and Yosemite and many of the other national parks scattered across America. Accessible nature quickly becomes unnatural. These beautiful ecosystems are being rapidly eroded—often literally—because we want to see them. Walden Pond is full sediment and phytoplankton because we want to swim in the calm waters that Thoreau used to look out on. Yellowstone’s wolves and trout contract diseases brought by humans, while grizzlies ingest the trash left by campers or thrown out car windows. The majority of our parks have air pollution problems because we insist on driving endless cars into them. You can’t drive across Yosemite Valley without getting stuck in traffic.

And yes, that traffic means that a record number of people are getting the opportunity to experience the great outdoors. Roughly 44 million people visit national parks every year now, which is up 26 percent from a decade before. In many ways, that’s a wonderful thing. It is, in fact, half of the National Park Service’s mission: to make the parks available and accessible for public enjoyment.

But the other half of that missive is to preserve the ecological and historical integrity of the parks—of the wildness we have left. We can’t enjoy what makes nature beautiful if we’re wedged between two camera-wielding tourists who block our view. And if we ruin what nature is left, no one will be able to see it anyway.

The National Park Service had to close Mariposa Grove because the roads and gift shops that tourists so enjoyed were damaging its tree roots and ecology. It will open later this year following an extensive restoration project, sans pavement and tram tours. Trails will replace the roads, and hikers will have to actually hike to see the most impressive trees. It remains to be seen whether the droves of returning tourists will continue the damage as before, or whether the renewed inaccessibility will drive enough of them away. Let’s hope so.