The unheralded sea creatures that give other organisms room to grow. 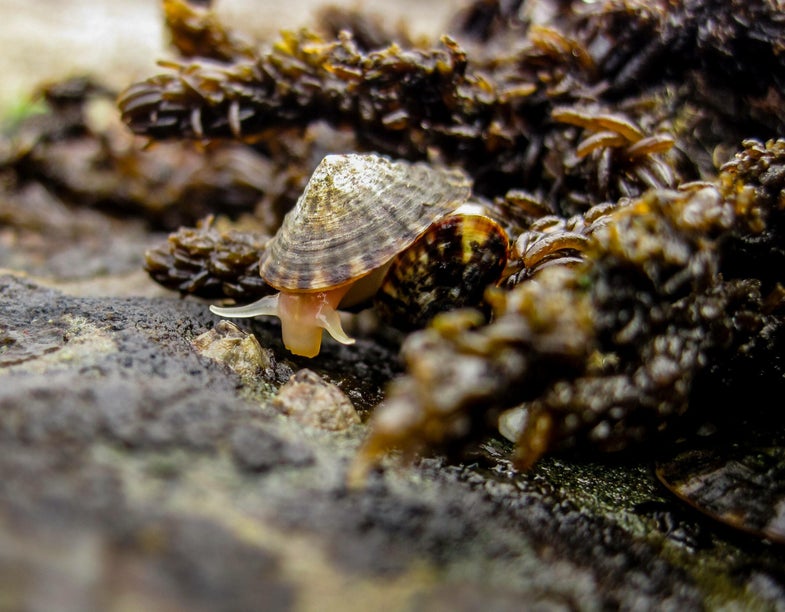 The fate of aquatic ecosystems in a warming climate may well rest upon the appetite of a tiny snail-like herbivore you’ve probably never heard of: the limpet.

The behavior of the little limpet, in fact, is a perfect model for what scientists see as a defense strategy against the pressures imposed upon the environment by increasing temperatures. Because limpets eat plants, they actually make ecosystems stronger in the face of climate change. Among other things, they create space for other creatures, making ecosystems more diverse.

“At first it might seem like an ecosystem untouched by consumers [herbivores and predators] is better, and, well, it would be better for populations of plants if that was all we cared about, but it’s not better for the ecosystem as a whole,” said Rebecca Kordas, who studied how plant-eating critters help aquatic communities cope with climate change in the rocky intertidal, the area of the shore between low and high tides. “Every organism plays an important role in an ecosystem. Consumers are important because they keep the populations of the species they eat in check. They keep them from taking over all of the resources.”

Her study, recently published in the journal Science Advances, found during the summer, when it was the hottest, starfish, anemones, mussels, barnacles and seaweed in the rocky intertidal fared well in the heat, but only if limpets were present. All must cope with huge variations in temperature every day as the tide moves in and out. “When limpets were part of the community, the effects of warming were less harsh,” Kordas said. “When these herbivores weren’t around, the ecosystem did much worse.”

The main resource under threat in the rocky intertidal is space, and hungry limpets generate more of it, allowing other plants and animals to move in and thrive. In other ecosystems, the main resources could be light, as in tropical rainforests, or nutrients, as in ponds or lakes, Kordas said. “Consumers are important in maintaining the balance in all ecosystems,” she said.

In Yellowstone National Park, for example, “when wolves were reintroduced to the park, the entire ecosystem changed,” said Kordas, a research fellow at Imperial College, London, who conducted her experiments while she was a doctoral student in zoology at the University of British Columbia. “Even the path of the rivers through the landscape changed.” Returning wolves helped manage the elk population. Elk were gobbling up plants near rivers, leaving riverbanks vulnerable to erosion. In another example, the presence of sea otters helped control sea urchins who munch on kelp. Kelp forests guard coastlines against storms and they soak up carbon just like tropical rainforests.

Limpets snack on little algal spores, preventing those spores from growing up into large “weedy” seaweed. “By keeping the algae from using up all the space, it allows other species, like barnacles, to settle and thrive in the ecosystem,” Kordas said. “Barnacles are super cool and very important to rocky intertidal ecosystems because they provide a lot of structure that is useful for other organisms.”

For this study, she and her colleague fashioned mini-marine ecosystems on the shore of Ruckle Park on British Columbia’s Salt Spring Island. The tiny systems were built on hard plastic plates that allowed the scientists to control their temperatures. Some of the plates allowed the hungry limpets in — and some did not. “We saw much more diversity and variety in the ecosystems [with herbivores],” she said, adding that “we want variety because we found it helps protect the ecosystem when you add a stressor like heat.”

They designed the special mini-ecosystems to compensate for otherwise difficult conditions in the field, she said. “I love doing experiments out in nature, rather than in a lab, although they can be quite difficult to do on rocky shores because any experiment that you attach to the rocks tends to get knocked off by waves, eaten away by the salt water, breaks because water leaks in, or breaks because of very hot, low tide in summer, or very cold, low tide in winter, conditions,” she explained.

Also, working on rocky shores can be tough because scientists only have access to the area during low tides, which last four to six hours, and during calm weather, meaning no waves. Near Vancouver, low tides occur during the day in the summer, “which is lovely,” she said, but happen at night during the winter, making for “very unpleasant working conditions,” she said. She and her colleagues, including Christopher Harley, a UBC zoology professor and the paper’s senior author, worked with an engineer to develop the special heating plates. Protecting “consumer” species is critical to maintaining diversity, which is essential to surviving the effects of climate change, she said.

“The story is not about limpets, per se, but is more about preserving intact ecosystems and specifically, preserving consumers — herbivores and predators — in ecosystems,” she said. “Intact ecosystems will be best equipped to resist the effects of a warming climate. Degraded ecosystems, where species have been removed, for example, because of harvesting or fishing, will not fare as well when they become stressed by rising temperatures.

“It is vitally important that the interactions between species remain intact, because they can help protect the ecosystem when it’s disturbed or stressed,” she added. “If important consumers like these are lost, the ecosystem is more likely to be harmed by a warming climate.”