Eleanor the sea turtle swam through a tropical storm and survived

She can teach scientists a lot about how ocean animals deal with extreme weather. 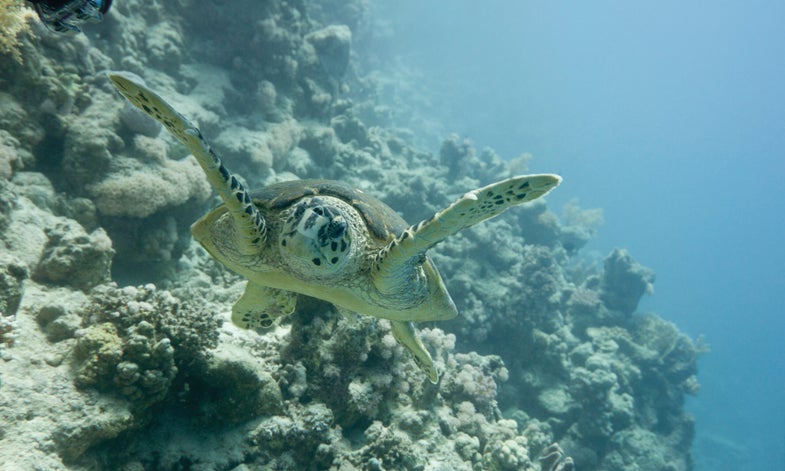 Eleanor the sea turtle is one tough lady. Not only did she ride out a powerful tropical storm, but she did it in style.

“Eleanor’s ‘sea turtle tale’ is a sunshine story about how wonderful nature is,” said Maria Wilson, a biologist at the University of Southern Denmark. “Sea turtles have been around for millions of years and have adapted to the environment they live in, including severe weather. That [Eleanor] survived the storm is not that big of a surprise, seen in that perspective. It is more that she did it so well.”

Wilson was part of a joint Danish, American and Australian team of scientists monitoring sea turtles fitted with GPS transmitters and motion sensors off the coast of Sarasota, Florida, when in June 2012 Eleanor unexpectedly got caught in tropical storm Debby. Debby roared through the Gulf of Mexico from June 23–27 with wind speeds of 60 mph, causing extensive flooding in the state.

Debby struck during egg-laying season, while Eleanor was at sea. The turtle already had nested on one of Florida’s beaches and had retired to the ocean to restore her energy before returning to the beach to lay more eggs. Instead, the currents carried her more than 60 miles north of her beach. Nevertheless, once the storm passed, she was able swim south, and she made her nest only a short distance from her last one.

“She re-nested, though a bit delayed, only 75 meters from her previous nest, despite [the fact] that she was forced more than 100 kilometers away from the seabed where she was resting,” Wilson said. “That is impressive.”

Wilson and her colleagues described Eleanor’s journey in a paper recently published in the Journal of Experimental Biology. The research also involved scientists from Mote Marine Laboratory and Aquarium in Sarasota, the Department of Parks and Wildlife of the Marine Science Program in Australia, and Aarhus University in Denmark.

While encouraged by Eleanor’s resilience, scientists don’t know enough about the impact of storms on ocean animals, including endangered species of whale, manatee, shark — and sea turtles. “Unfortunately, we only have data from one sea turtle,” Wilson said. “I would expect that other adult sea turtles can cope with hurricanes and storms, like Eleanor, but we are in urgent need of more knowledge.”

As climate change warms oceans, the Earth has experienced the devastation wrought by severe storms and hurricanes—with catastrophic effects for both humans and animals. Although adult sea turtles may be equipped for such storms, marine biologists worry about the fate of sea turtle nests. Hurricane Irma, for example, took a terrible toll on green turtle nesting sites in the Archie Carr National Wildlife Refuge in Brevard County, Florida.

“That is the darker story, the effect of Hurricane Irma, for example,” Wilson said. “We have no data on how newly hatched fragile sea turtles manage during the storm. Given their much smaller size, I fear that they have a much more difficult time with the storm. Furthermore, we have the beach erosion caused by the storms. That is a major concern for the survival of sea turtles, especially since we are facing a future with more storms, hurricanes and unstable weather conditions.”

In fact, most of the eggs Eleanor and other turtles laid before Debby were lost. “The storm that Eleanor easily survived destroyed almost 90 percent of nests on the beach,” Wilson said.

Eleanor was tagged for 16 days, including four during the storm. “When a tropical storm or hurricane passes by, you could expect that sea turtles will move to the seabed, maybe at deeper waters, further out in the Gulf of Mexico, and wait until the storm is over,” Wilson said.

When the scientists first examined the data from Eleanor’s tag, it appeared that her first strategy was to move to the seabed. “She conducted some of the usual dives to the bottom, where she — in calm weather — would stay and rest, but when she was at the bottom during the storm, she moved and did not rest,” Wilson said. “This could be because there was too much wave action going on. Her next strategy was to swim, trying to get away from the storm.”

But because the storm lasted so long, she couldn’t escape the bad weather, and the prevailing currents moved her north. Despite this, she returned close to her home beach when it was over and laid more eggs, although fewer than normal.

The researchers haven’t had contact with Eleanor, who was named and adopted through a wildlife conservation program, since October 2012. They had to remove her motion sensor tag when she re-nested. However, she carried the GPS tracker for another 100 days, which showed that she moved south once the nesting season was over, Wilson said. The lifespan of a sea turtle is similar to that of humans.

It’s not clear whether all sea turtles facing severe storms would fare as well as Eleanor, since it is difficult to conduct this kind of research. Researchers must equip sea turtles with motion sensors and GPS trackers when a storm is passing—which is tricky in the best of circumstances — and then be at the right place at the right time to retrieve the data.

“This means you have to be at the beach at the exact position the night the sea turtle decides to nest,” Wilson said. “This is where the GPS transmitter comes in handy, so you can see when the sea turtle is approaching the beach, although sea turtles do not always return to the same beach to re-nest.

“You cannot really plan a tropical storm, which is also why there are very few studies addressing this topic,” Wilson added. “ But I think — and hope — that Eleanor’s behavior is typical.”