The reason why is still unknown. 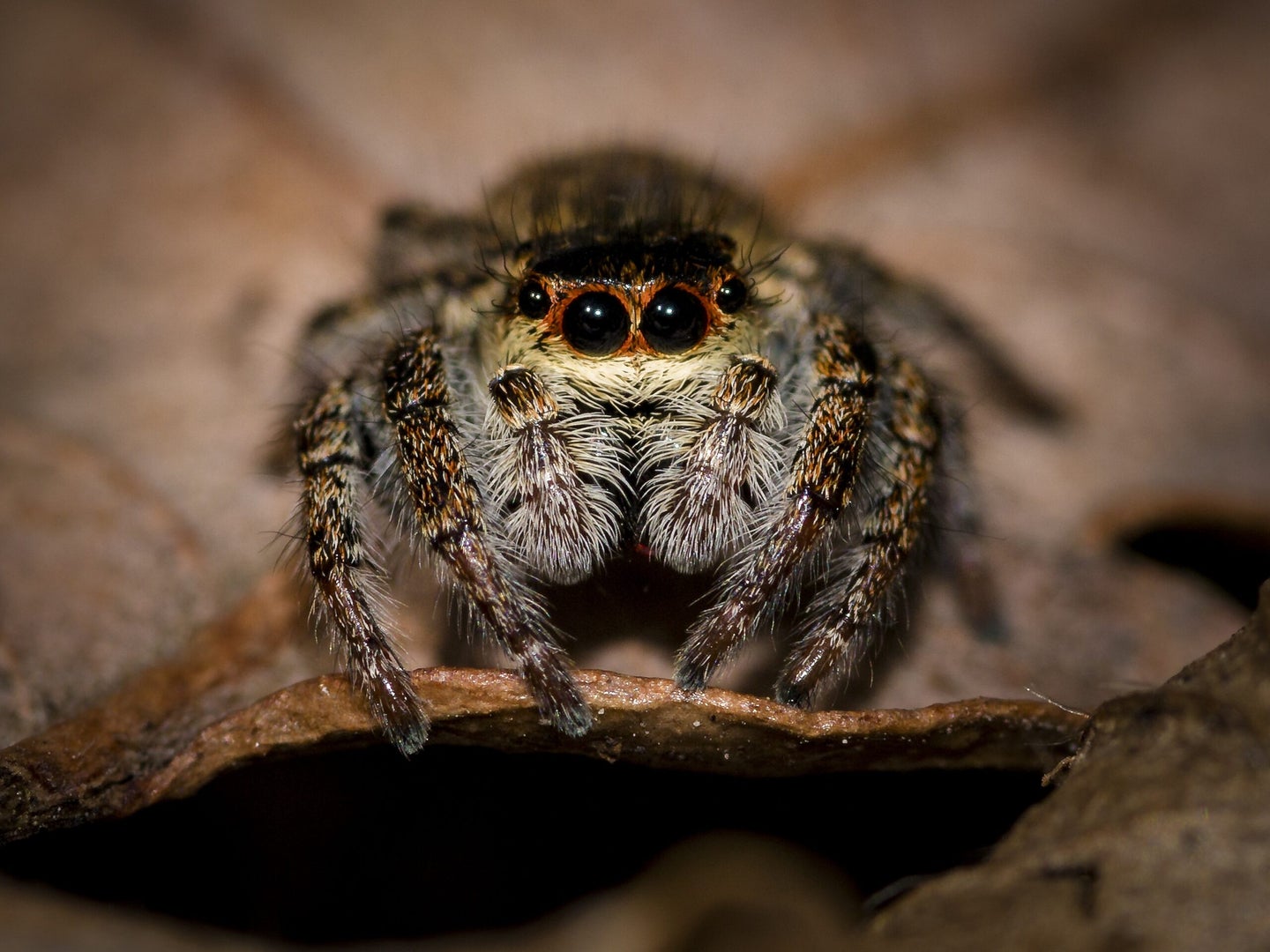 Jumping spiders, a family of spiders found all over the world, have four pairs of eyes and, as the name suggests, an acrobatic affinity for jumping. For the most part, these spiders don’t weave webs that entrap their prey; instead, they use their silk as a “dragline” to help perfect their jumps, or to weave silken shelters used for mating, laying eggs, and resting securely at night, tucked away from predators.

A recent study published in the journal Frontiers in Zoology describes a mysterious new nighttime behavior from these invertebrates: the researchers found that a population of European jumping spiders rest at night by hanging from a solitary thread of silk, like a miniature bungee cord. Based on these preliminary findings, as well as previous anecdotal observations from researchers on other continents, the authors suggest that in the dark, when their extraordinary eyes aren’t of much use, these spiders may have another trick up their sleeve to get through the night safely.

Lead author Daniela Rößler, a behavioral ecologist at Harvard University, began this research more-or-less by accident. While working on a different experiment, she caught several European jumping spiders in Trier, Germany and placed them in clear boxes on her windowsill. After coming home one night, she says, “I looked at the spiders quickly, and I was like, ‘oh god, did they die? What happened?’ All of them were hanging from the lid of the plastic box inside the box.”

To learn more, Rößler and her coauthors returned to the patch of grassland in Trier, Germany where the spiders were originally gathered. In addition to observing some spiders in captivity, they established 12 four-square-meter plots and visited twice a day (during the day and at night) over a period of nine days. There, they took measurements, observed how the spiders built this “suspension line,” and watched how they reacted to various disruptions.

[Related: Scientists taught a spider how to jump so they can one day do the same for robots]

“We found that they all hang,” she says. “The babies, even just one day after they emerge from the egg sac, they can already do this behavior.” When they choose a site, which could be a piece of tall grass or vegetation, the spiders will set an anchor, says Rößler. “It’s like a little 3D printer basically, they use their silk to make little attachment disks.” From there, they drop a line of silk and hang a few centimeters down, folding in all of their legs except for one, which they use to hold onto the thread. Sometimes, the researchers found, the spiders were still munching on prey as they settled in for the night.

Also interesting, says Rößler, was that the spiders held in captivity would switch back and forth between their typical silken “retreats” and the hanging behavior. “That makes you think, okay, how do they choose what to use? What is the function of this?”

To begin unraveling the function, the authors tested out a few different types of disturbances: flashing them with light, touching the vegetation nearby, or touching the silk directly. For the latter test, almost all of the spiders dropped down to the ground. The authors speculate that the suspension could help protect the spiders from nighttime predators, either by keeping them out of harm’s way, or by allowing the temporarily sightless spiders to detect potential predators through their vibrations.

“They actually differentiate between all these different disturbances,” she says. “Sometimes it was really windy and they would just dangle in the air, but they wouldn’t care about it, which means that they can discriminate between different vibration cues.”

“I found the research topic quite interesting,” wrote Ana Cerveira, a behavioral ecologist at the Universidade de Aveiro in Portugal who was not involved in the research, in an email to Popular Science. “This work will surely influence future research in jumping spiders by bringing attention to a behavior that could in fact be more common than we think in this family but that may not be easily detectable in both natural and laboratory conditions.”

This study raised more questions than it answered, says Rößler. “It really made me realize how little we know about animals—invertebrates, especially—in our own backyards.”

Correction: Due to an editing error, an earlier version of this story stated, in one instance, that the lead author caught the jumping spiders in Frankfurt, Germany, when, in fact, it was in Trier, Germany. It also stated that the researchers established 12 two-square-meter plots to study the spiders, when, in fact, the plots were four-square-meters in size. We regret the error.