Octopuses trip on ecstasy the same way we do

We may have more in common with invertebrates than we thought. 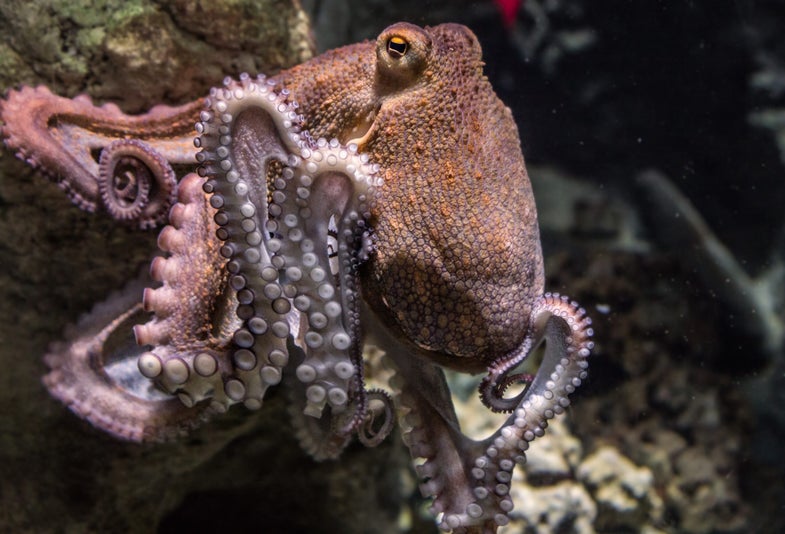 Gül Dölen and Eric Edsinger are probably the only people in the world who’ve watched an octopus have a bad ecstasy trip.

“The first couple of animals we tried, we gave them way, way, way too much,” says Dölen, a neuroscientist at John Hopkins University, ”because I thought, ‘well, if it’s going to work it’s probably going to need monster doses to see anything.’”

The masters of disguise sent waves of color rippling down their arms, blanched white, and changed their breathing patterns. Suspecting that the ecstasy—also known as MDMA—was overwhelming the animals, Dölen and Edsinger, a marine biologist at the University of Chicago, dialed down the dosage. Three test trials later, they settled on one one-thousandth of the original as a reasonable amount. (All seven animals involved in the study are now safe at home at the Woods Hole Marine Biological Laboratory, where they’re acting normally, Dölen says).

More than 500 million years of evolutionary history separates these marine aliens from humans on the evolutionary tree, but MDMA starts to take effect on both of our brains at about the same dosage, pound for pound. This result alone was telling, but Dölen and Edsinger were in for another surprise, and one with deep ramifications for neuroscience: we act in similar ways when we’re high.

With three hearts, blue blood, and arms that keep swimming when severed (more neurons live there than in their brains), octopuses are so bizarre some scientists wonder if they came from space (spoiler alert, they didn’t). And that alienness is exactly what attracts Dölen.

“Octopus brains are organized much more similarly to a snail than to ours,” she says. Specifically, they lack the crinkly cerebral cortex part that neuroscientists credit for many of our advanced abilities like language and planning. Nevertheless, octopuses display many seemingly-intelligent behaviors—such as recognizing specific researchers and solving puzzles— that put experimental darlings like fruit flies and nematode worms to shame.

Dölen’s lab searches for the brain structures that help humans (and other animals) socialize, so in her mind octopuses and MDMA were the perfect match. The eight-armed hermits rarely interact with their own ilk except while mating, during which the dominant female will tolerate the male’s presence for just a few minutes before chasing him away. These fleeting moments of harmony suggested that the animals can get along when necessary, so the researchers wondered if MDMA—which in humans, is known to make the user act euphoric, confident, and all around lovey-dovey—might be able to flip that switch in octopuses too. “There’s no other compound that I know of that is so effective at inducing pro-social behavior in humans or mice,” Dölen says.

Since no one had ever thought to see how an octopus reacts to psychoactive drugs before, Dölen and Edsinger had to design the experiment from the ground up. Taking inspiration from similar rodent studies, they set up a three-chamber tank where the middle chamber was empty, one chamber had a caged octopus, and the other chamber held a “novel object” (a Chewbacca or storm trooper Star Wars figurine. They dropped each sober test subject into the middle tank for thirty minutes and measured how many seconds they chose to spend in each area. Then, they tried again after giving the subject a ten-minute soak in a beaker full of ecstasy-water, followed by a rinse to avoid contamination.

Even with only four experimental subjects (the first three got the week off to recover), the difference was stark. Sober octopuses spent most of their time hanging out with the action figure, perhaps because being near the other octopus stressed them out or perhaps because they’re big George Lucas fans. When they did venture into the “social” chamber, they smushed themselves into a corner, at most tentatively reaching out one arm toward the cephalopod in residence.

Adding MDMA flipped that behavior, transforming wallflowers into social butterflies who spent most of their time with the other octopus. “They were all loosey-goosey with all five arms hugged around the [cage],” Dölen says. Anecdotally, she also mentions that she saw lots of goofiness, like making tent-shapes with their bodies, doing “what looked liked water acrobatics,” and spending long periods of time stroking an airstone in the tank.

Such playful behaviors aren’t unheard of in the wild, according to David Scheel, an ecologist at the University of Alaska Pacific who’s spent hundreds of hours watching videos of octopus interactions, but he does find the overall message of the study profound. Octopuses view each other as “important actors” in each other’s worlds, he says, so it’s natural that their brains have a social mode. “That’s what this paper really shows so beautifully,” Scheel says. “They have a mechanism that is probably latent in most octopuses, but it exists throughout the animal kingdom.”

It’s a wild result. Many medications don’t even have the same effects from person to person, much less species to species. Jump to a completely different branch on the tree of life and all bets should be off. There’s absolutely no reason to expect dog drugs to work on fish, or spider drugs to work on foxes. Yet somehow ecstasy pulls it off for both humans and octopuses.

The common thread seems to be a molecule called serotonin. MDMA works in part by latching onto the pumps in the brain that usually suck up free-floating serotonin and reversing them, dousing the brain with a liberal dose of the happy-making chemical. This process turns humans and mice extremely friendly, and this study, which was published Thursday in Current Biology, provides the first evidence that it does something similar to the spineless octopus.

“Not only is serotonin a big player in social behavior, it’s been that way for a really really long time,” Dölen says. (The last ancestor we shared with the octopus—some kind of worm—lived hundreds of millions of years ago). She and Edsinger also analyzed the recently sequenced genome of the California two-spot octopus—the species they used in their experiment—and showed that it did indeed have the gene that makes those serotonin pumps. They found analogous genes in flies, worms, and other mollusks (although oddly not in hypersocial insects like ants and bees), suggesting that the effect of serotonin may be much more widespread than neuroscientists had previously thought. As a result, future studies of social interactions will need to factor in serotonin’s role, Dölen says.

And she’s ready to help launch the field of octopus behavioral studies to find out more. The National Institute of Health doesn’t currently fund experiments on octopuses because it doesn’t recognize them as model organisms, according to Dölen, but establishing a body of trusted experimental procedures like the ones that already exist for rodents could make it easier for other researchers to carry out similar experiments in the future.

“Establishing a field like this takes lots and lots of labs working all on different parts of the problem,” Dölen says. “This is an invitation to other people to come work on it.”