Due to its peculiar lifestyle and mating habits, the larger Pacific striped octopus has been largely ignored by scientists. It doesn't even have a Latin name. 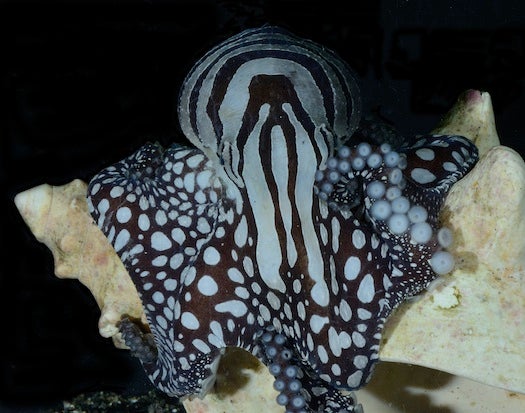 In 1991, a biologist named Arcadio Rodaniche published a short abstract describing a new species of octopus he had discovered in Panama. This new octopus, Rodaniche claimed, had a lifestyle quite unlike any other species of its kind:

While the mating and breeding habits of most octopuses seem to be structured around the central fact that, given the opportunity, either of the two lovers might try to kill and eat the other, the larger Pacific striped octopus behaves as though no such danger exists: Instead of living alone, they’ll often take on a den-mate, and even associate with a wider circle of up to 40 other octopuses. And when it comes time to mate, the two animals do not, like most other species, keep the other’s mouth at the furthest possible distance, but come together in an intimate sucker-to-sucker embrace: 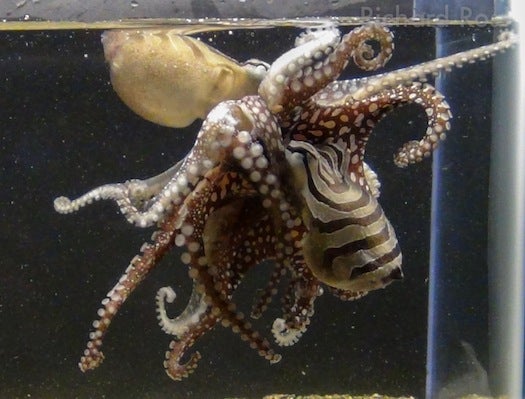 And while most female octopuses lay just one clutch of eggs and die as soon as the eggs hatch, the larger Pacific striped octopus broods several batches of babies throughout her lifetime.

Unfortunately, other biologists were not buying all these romantic details, and Rodaniche’s manuscript was never published.

The larger Pacific striped octopus slipped back into obscurity for over two decades, until it was rediscovered last year.

Now, California biologists Richard Ross and Roy Caldwell are working on giving the larger Pacific striped octopus the full scientific treatment: they are writing up a species description and a paper about the LPSO’s behaviors, and are trying to organize an expedition to go out and study the animal in its natural habitat.

According to a press release published on Ross’s blog, Caldwell is quoted saying, “The Larger Pacific Striped Octopus is the most beautiful octopus I have ever seen.”

Here’s a video of a male LPSO changing color during an extra-sexy mating display for a female: