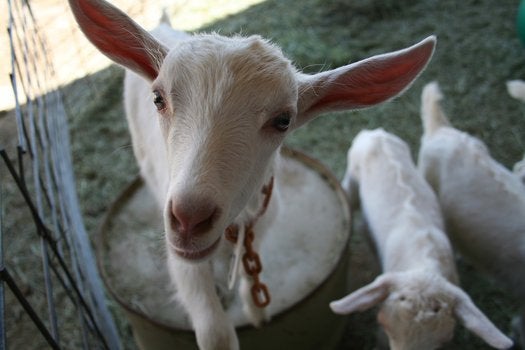 Let’s say you’re a giant biotech company in sunny California, and you have a big ranch where you keep thousands of goats. You use the goats to produce all kinds of antibodies that you then extract and sell to biological researchers all over the world. You are, in fact, one of the world’s biggest suppliers of these antibodies–a true industry leader.

Anyway, everything is going quite well for you, except that the USDA keeps poking their big government nose into your operations, sending inspectors over to your ranch to have a look around, and the inspectors are not liking what they’re finding. They keep telling you that you need to provide “adequate veterinary care” for your goats and that the animals’ facilities must be “maintained in good care,” and soon enough, they’re filing a complaint that lists 17 of these little violations and alleges that you have “willfully violated the Animal Welfare Act.”

What are you going to do? You could go through all the trouble of hiring a couple extra people to look the animals over and treat them when they’re sick, etc, etc, OR you could get really clever and outsmart the big government outfit by, I don’t know, failing to mention that you’ve got a barn down the road with 841 goats inside of it–give ’em one less place to make trouble.

When the real-life company Santa Cruz Biotechnology found themselves in this position, they went with option number two. And it worked!–for a little while. But then, late last October, the USDA received a tip about the barn, and an inspector went down there and found it, along with the 841 goats, 12 of which were not, technically speaking, in good shape.

To make matters worse, the inspector could tell that the barn had been used for a while, which made it obvious to everyone that the staff on the Santa Cruz Biotechnology ranch had been blatantly lying when they claimed–as they had, on multiple occasions–that the building didn’t exist, and that there weren’t any animals inside it.

The company may face fines or a suspended license for their violations of animal welfare and for lying to the USDA, but an even bigger problem (for Santa Cruz Biotechnology) may come from the NIH, who currently exempts off-the-shelf antibodies from the set of animal treatment rules that governs NIH-funded research.

If the NIH decides to change that rule, Santa Cruz Biotechnology may soon long for the simple days of USDA oversight.