With More Food Than Ever, Why Is Hunger On The Rise?

One of the dangers of virtual demand. 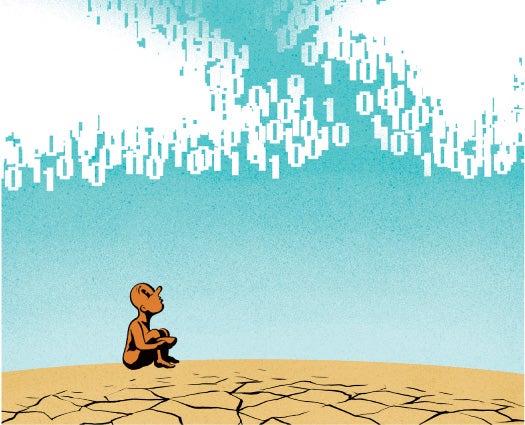 Virtualization is a powerful tool for improving the real world. When we translate material things, from genes to jet planes, into numbers, we can analyze and manipulate them far more easily. But two recent reports suggest that virtualization can also have disastrous real-word consequences, especially when it comes to food.

Fred Kaufman begins his new book Bet the Farm: How Food Stopped Being Food by identifying a troubling paradox of modern food production. In 2008, “farmers produced more grain than ever, enough to feed twice as many people as were on Earth. In the same year, for the first time in history, a billion people went hungry.” How could we produce more food and more hunger? The answer, Kaufman writes, is that food became virtualized, or in this case “financialized.” Instead of using data systems to find sensible ways to distribute real food, we have increasingly used them to trade virtual food as a speculative object, much like the complicated financial products that helped pump up the housing bubble. The result: Prices skyrocket, real food sits uselessly, people starve.

We have increasingly used data systems to trade virtual food as a speculative object.Creating virtual demand is especially dangerous now, because real demand is still growing, and—as the investment strategist Jeremy Grantham reported last fall in the journal Nature—farmers are struggling to keep up. “Growth in the productivity of grains has fallen to 1.2 percent a year,” Grantham reports, “which is exactly equal to the global population growth rate. There is now no safety margin.” Usually when the margins are thin, more data is the solution, and yet—paradox within paradox—it is the commodities markets themselves that historically have been our best source of information about the food supply.

I asked Kaufman, a close friend and a contributor to the magazine, how we could resolve this conundrum. It’s not hard, he said. All we have to do is apply the technology of commodity markets to coordination, not competition. The United Nations is already showing the way. Its recently introduced Agricultural Market Information System, or AMIS, provides the same useful global market data—How much do we have? How much did we use last year? How much is left over? Are we running surpluses or deficits?—without the useless speculation. “Commodity markets are extraordinary technological feats of price discovery and management,” Kaufman said. “The fight, as always, is to keep technology in line with human needs.”