Dung Beetles Navigate By The Stars

Views of the Milky Way provide more than just ambiance for the fecal-foraging insect. 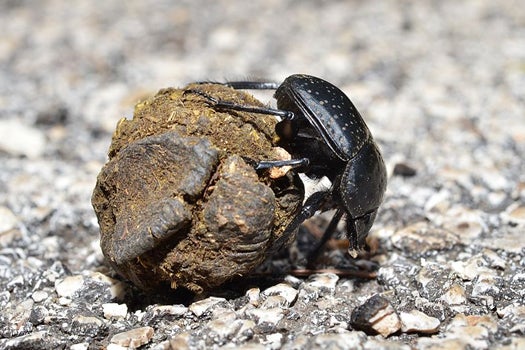 Celestial navigation has guided man around the world for several thousand years. A new study suggests it could also be guiding dung beetles.

Marie Dacke, a zoologist at Sweden’s Lund University, studies the way animals navigate. In a study online this week in Current Biology, she and a team of researchers looked into the surprisingly sophisticated navigational habits of the dung beetle, finding that they too have their eyes on the skies.

Here’s how it works: Dung beetles like to maintain straight lines as they run. As they’re going about their beetle business, when a pile of droppings catches their eye, they roll it into a ball and, walking backward, push it somewhere safe to eat. A straight course ensures they don’t return to the fierce competition back at the dung pile.

Researchers placed African ball-rolling dung beetles in a planetarium, and found they could navigate just as easily with only the Milky Way visible as with a full starlit sky. Under overcast conditions, the beetles lost their way.

Dacke’s previous research has shown that dung beetles use the sun, the moon and celestial polarization patterns to keep them moving in a straight line. Yet nocturnal beetles can stay their course even on moonless nights, guided by the stars.

Birds and seals have also been known to use the stars for navigation, but this is the first time insects have been found to use them for the same purpose. It’s also the first documentation of animals using the Milky Way specifically.

Dacke is currently in the process of researching why dung beetles dance on top of their poo-ball prey. Previous research has indicated that it may be a cooling method for hot days, but it may also be an orientation device.