Science Predicts What Kinds Of Toys A Dog Will Enjoy

Researchers have some answers on how to please a picky pup. 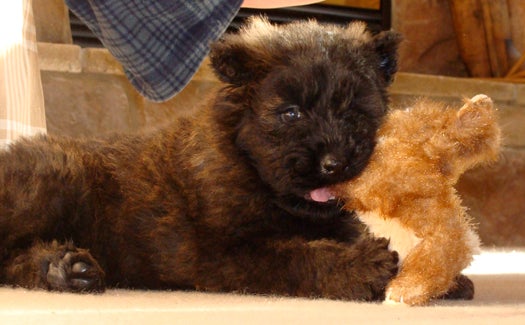 Dog toy selection is more art than science. Maybe you think it’s safe to just go for a classic. Something like a nice bone.

Wrong, research says. A team recently studied a set of very lucky Labrador retrievers (a breed known for its playfulness) in kennels, letting them spend 30 second intervals with several different toys. The dogs would get one type of toy, then another, completely different one, with the team measuring when the dogs decided to quit playing with each. The study measured several factors, going as far as determining if color or odor had anything to do with the pups’ preferences.

Most of the time, it didn’t really matter. The dogs had more fun with the soft, squeaky, slowly-edible toys than the tough, unmalleable ones, but not much else swayed their opinions. Dogs are hardwired, the authors theorize, to play with any novel object; the novelty just wears off after the animals determine what the toy is. The best way to get a social animal like a dog out of that rut, the researchers say, is to jump in and start playing, too.