The weirdest things we learned this week: holes in people (and cows), illegal cheese, and the world’s worst dairy disaster 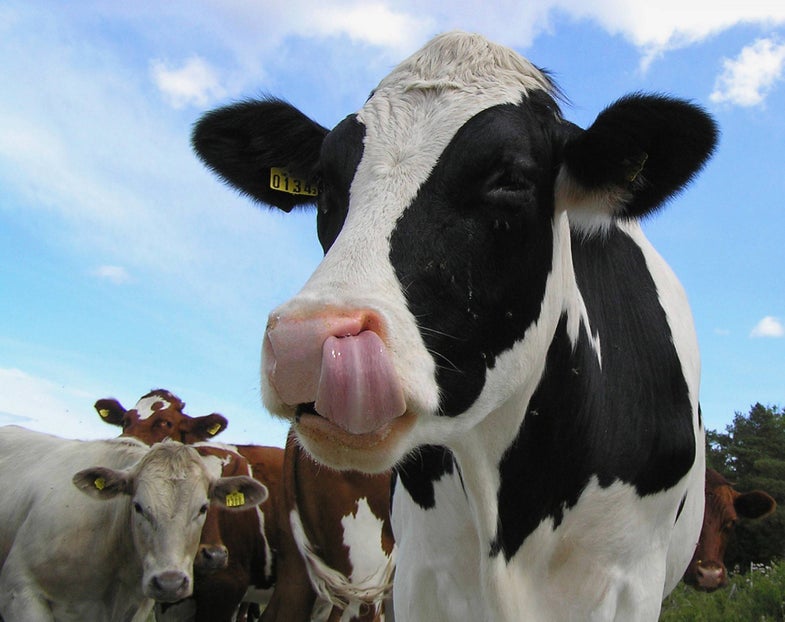 Who knew dairy could get so weird?. DepositPhotos
SHARE

This week’s episode is extra special: it’s the first half of our first-ever live show, which happened on September 14 at Caveat in NYC. We’re already cooking up plans for another one in the near future, so keep your eyes peeled for more info!

FACT: This cheese is so gnarly it’s literally illegal

By Rachel Feltman on behalf of Sara Chodosh, who is on a well-deserved vacation!

Consider how many disgusting, potentially dangerous foods are totally legal to eat: fermented, actively rotting shark meat, super-deadly pufferfish, and newly-severed, super-wiggly octopus legs capable of choking you on their way down. So an illegal cheese must be pretty intense, right? Right.

Enter casu marzu, a traditional Sardinian cheese made of sheep’s milk—and maggots. Lots of maggots. Casu marzu starts out as your standard wheel of pecorino, but mongers leave it sitting outside to allow the cheese fly Piophila casei to fill it with eggs. A fly can lay hundreds of eggs in a single go, so it doesn’t take much to impregnate the entire wheel with wriggling larvae. Those larvae eat the cheese, and their digestive juices break it down into a softer, creamier product than the original.

It apparently tastes pretty good, but you can’t choose to indulge sans-maggot: if the larvae are dead, it’s considered spoiled. You can, however, suffocate them in a baggie right before indulging.

The European Union has banned the dish for hygiene reasons, but plenty of Sardinians still enjoy it. It might sound gross to the uninitiated, but as Sara pointed out at the live show, this is really the same process as all cheesemaking, only on a visible scale. Or favorite cheeses are all the result of microbial organisms eating and digesting the original milk product—the larvae that turn pecorino into casu marzu aren’t all that different. But they are a lot more squirmy.

I wasn’t going to tell you all about the Great Butter Fire that blazed in Madison, Wisconsin in 1991.

I was going to talk about the Norwegian goat cheese fire that burned for five days and closed a tunnel in the northern Norwegian town of Tysfjord for several weeks. The blaze of glory that is 27 tons of goat cheese burning on a truck is absolutely an image one wants to carry in their imagination forever. Then I started looking into other dairy disasters, and I found this mesmerizingly delightful 2011 segment produced by News-3 Madison, WISC-TV, about the massive fire that tore through a cold storage facility in Wisconsin in 1991: literal rivers of butter, hot dogs exploding, a fire that burned for eight nights, and a “deep fryer of fire” as correspondent David Douglas reported. Without a doubt, this was the weirdest thing I learned this week.

Fact: We have an exploited Canadian to thank for our practice of punching holes in cows

On June 6, 1822, Alexis St. Martin—an 18-year-old French Canadian working for the American Fur Company in the Michigan Territory—received a life-changing musket wound. Shot accidentally from behind, he lost bits of muscle and rib as large as his hand. The duck-shot lacerated his lungs and diaphragm and punched right through his stomach. In short, he was not in a good way. But when local doctor William Beaumont tended to his wounds, the physician saw a unique opportunity—because although St. Martin otherwise returned to decent health, the wound in his stomach healed around an open hole that peered right into his stomach. Here’s what that looked like:

Scientists didn’t know much about human digestion at the time, so Beaumont purposefully took St. Martin on as a servant so that he could set about doing experiments (including, but not limited to, licking his stomach). Beaumont did publish a lot of interesting stuff during the course of their long, complex, and indisputably exploitative relationship (illustrated here, as referenced during the live show), but some recent studies suggest that Beaumont’s fixation on his patient may have also inspired his contemporaries to spend more time physically examining the ill folks under their care.

And to bring this back around to dairy, here’s one more thing about St. Martin’s injuries: It definitely inspired us to put holes in cows. You can read more about that strange process here.

*If you like The Weirdest Thing I Learned This Week, please subscribe, rate, and review us on iTunes. You can also join in the weirdness in our Facebook group and bedeck yourself in weirdo merchandise from our Threadless shop.