Saturn's northern pole is home to a six-sided feature that mystifies scientists. 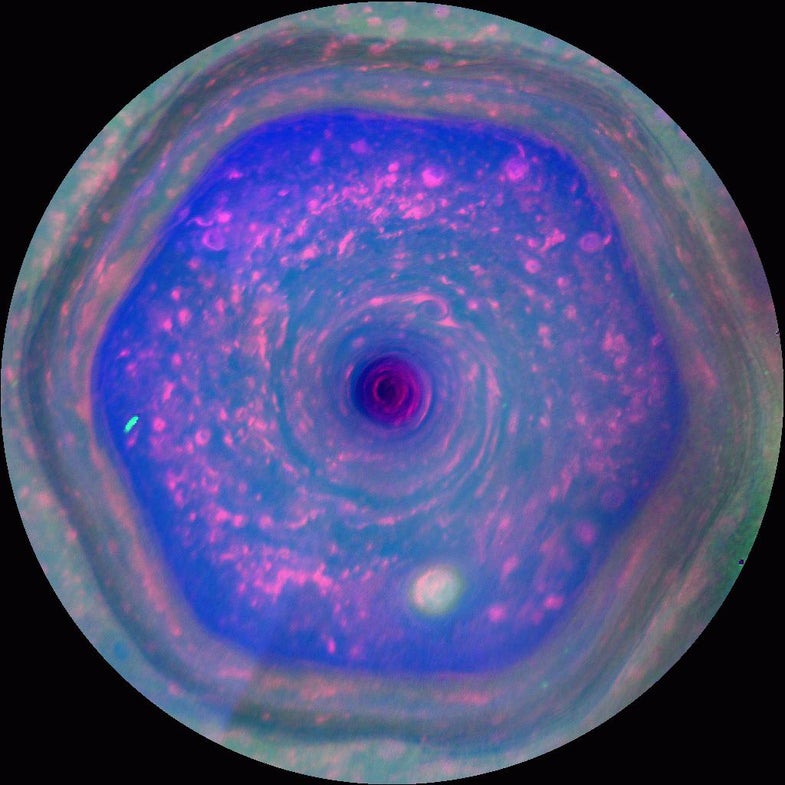 If you’re a long-time Popular Science reader, you know Megapixels. For those who don’t, these dispatches showcase amazing visuals in science and tech.

The planet Saturn’s northern pole has a beautiful—and mysterious—weather feature: a vortex of clouds shaped like a hexagon. The image above, taken by NASA’s Cassini spacecraft in 2012 and first published in 2013, shows this unique jet stream at its highest-ever resolution. NASA was even able to stitch together 128 individual images to create a movie showing the swirling winds in motion:

These hurly-burly hexagons are the subject of a new study in Nature Communications. According to researchers led by Leigh Fletcher of the University of Leicester, data from the now-defunct Cassini shows that a high-altitude hexagonal vortex forms at the planet’s north pole during the summer—sitting all the way up in the stratosphere, far atop the famous clouds we already know and love.

“Either a hexagon has spawned spontaneously and identically at two different altitudes, one lower in the clouds and one high in the stratosphere, or the hexagon is in fact a towering structure spanning a vertical range of several hundred kilometers,” Fletcher said in a statement.

Somewhat disappointingly, these shots do not show the natural hues of Saturn’s clouds; according to NASA, the area would appear gold and blue to any humans lucky enough to take a peek in person. You can see what that looks like here.