In Safety Study, Sheep on Meth Are Shocked With Tasers 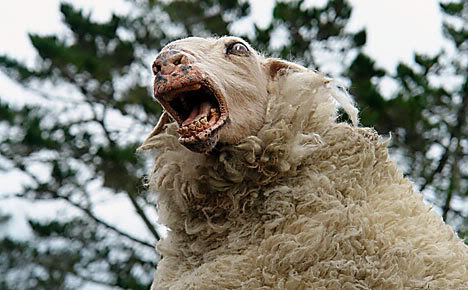 Cocaine is a hell of a drug, but getting shocked with a Taser while riding high on methamphetamines probably beats any white-knuckled cocaine experience hands down. And that’s exactly what happened to some lucky sheep in a new study that tested the effects of Tasers on meth-addled targets, funded in part by Taser International.

There’s at least some scientific reasoning behind all the apparent madness. Growing abuse of methamphetamines has led to arrest-related deaths in situations where law enforcement officers used their Tasers on drug-intoxicated suspects. The latest study was designed to test whether electronic control devices (e.g. Tasers) can lead to dangerous cardiac responses in meth-intoxicated humans, with sheep standing in for people.

The less-lethal device of choice was the Taser X26, a standard law enforcement tool which can fire at suspects from a distance of 35 feet. Researchers shocked sixteen anesthetized sheep after dosing the animals with an IV drip of methamphetamine hydrochloride.

Some of the smaller sheep weighing less than 70.5 pounds suffered exacerbated heart symptoms related to meth use. But neither the smaller nor larger sheep showed signs of the ventricular fibrillation condition, a highly abnormal heart rhythm that can become fatal.

The study that appears in the journal Academic Emergency Medicine openly lists a few caveats. Aside from being partially funded by Taser International, the study authors include two physicians who represent medical consultants and stockholders of the company. One of the two is also the medical director of Taser International.

Still, Taser has an understandable interest in assessing the safety of its less-lethal devices in these types of extreme conditions. Taser devices have evolved into a wide-ranging family that includes Taser shotgun cartridges that fire from a 12-gauge shotgun at up to 100 feet. The company has also teamed up with the Pentagon to develop shock cartridges for a grenade launcher.

Taser has even had its employees put themselves on the firing line to vouch for the safety of its products.

Certainly police would rather have less-lethal options for tricky situations involving meth. We can all probably agree that less Taser use is better, but that they are certainly preferable to more lethal methods of subduing criminals in certain situations. Outraged animal rights activists, however, can begin writing their letters of protest now.