It's completely different from Earth 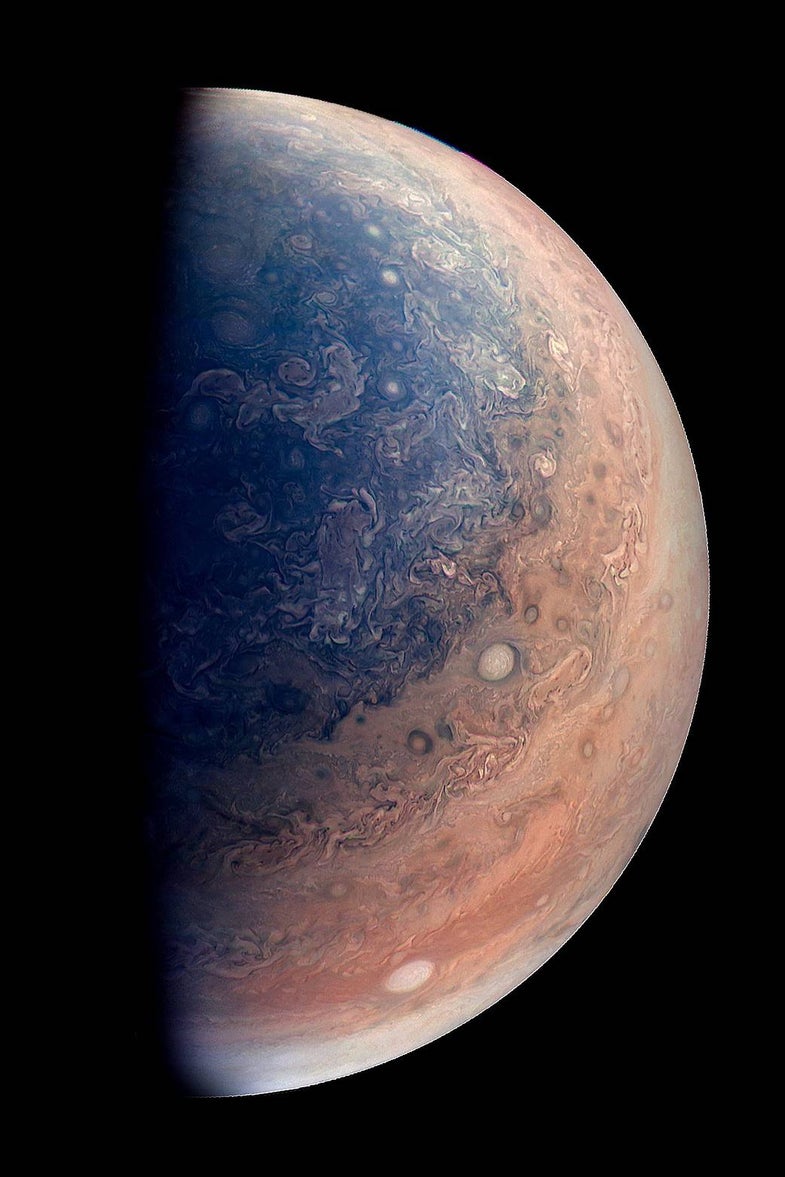 Jupiter as seen from the Juno spacecraft. NASA/JPL-Caltech/SwRI/MSSS/Gabriel Fiset
SHARE

Jupiter’s magnetic field is profoundly different from that of all other known planets — it essentially has two magnetic south poles instead of just one, a new Nature study finds.

Scientists analyzed Jupiter with NASA’s Juno spacecraft, which reached the planet in 2016. The probe’s orbit takes it over both Jupiter’s poles and flies only 4,000 kilometers above its surface, mapping Jupiter’s magnetic field—the strongest planetary magnetic field in the solar system—with unprecedented detail.

“We now have a close-up view of Jupiter’s magnetic field, almost as good as our knowledge of the Earth’s field, which took hundreds of years to work out,” said planetary scientist Chris Jones at the University of Leeds in England. “This gives us a chance to work out what is really going on deep inside a planet other than the Earth.”

Before Juno, “our best maps of Jupiter’s field closely resembled Earth’s,” said study lead author Kimberly Moore, a planetary scientist at Harvard University in Cambridge, Massachusetts. However, these new findings show that Jupiter’s magnetic field is radically different from Earth’s. “We were baffled at first, since the field Juno was showing us was nothing like we expected,” she noted.

Jupiter’s magnetic field is strikingly different. Again, using our color scheme, Jupiter is colored deeply red in a band near its north pole, but deeply blue at two spots, with one near its south pole, and another nicknamed the “Great Blue Spot” near its equator. (No relation to the planet’s more famous ‘Great Red Spot,’ which dazzles astronomers in visible light.)

“The magnetic field of Jupiter was thought to be like the Earth’s from our rather fuzzy previous view — now we can see it’s really different,” said Jones, who did not take part in this research.

Scientists think planetary magnetic fields stem from their dynamos—churning electrically conductive fluids within the cores of planets that are driven by the heat within those worlds. The motions of dynamos cause electrons to move within the fluids, creating electric currents that in turn generate magnetic fields. On Earth, these fluids are molten metals (such as iron and nickel), whereas on Jupiter, the extraordinarily high pressure and density inside the planet forces hydrogen gas to become liquid metallic hydrogen, which is about as electrically conductive as metal.

The researchers suggest the strange nature of Jupiter’s magnetic field may stem from this unique internal structure. Whereas Earth’s dynamo operates within the relatively simple, uniform liquid outer core around the planet’s solid inner core, the scientists think Jupiter’s core “might have dissolved, and mixed with the inner half of the planet,” Moore said.

In addition, Jupiter is a blend of hydrogen and helium, which do not always mix well. “Just like we have water rain on Earth, Jupiter may have helium rain inside the planet, and this could alter the magnetic field,” Moore said. “Jupiter’s winds might also reach down to depths where there’s sufficient electrical conductivity to affect the field.”

More data from Juno could shed light on which scenarios for Jupiter’s interior may be correct, Moore said.