How the Saturn V Broke into Pieces Launching to the Moon

When the Sun rose on the morning of November 9, 1967, Cape Canaveral was quietly buzzing with activity. Along with... 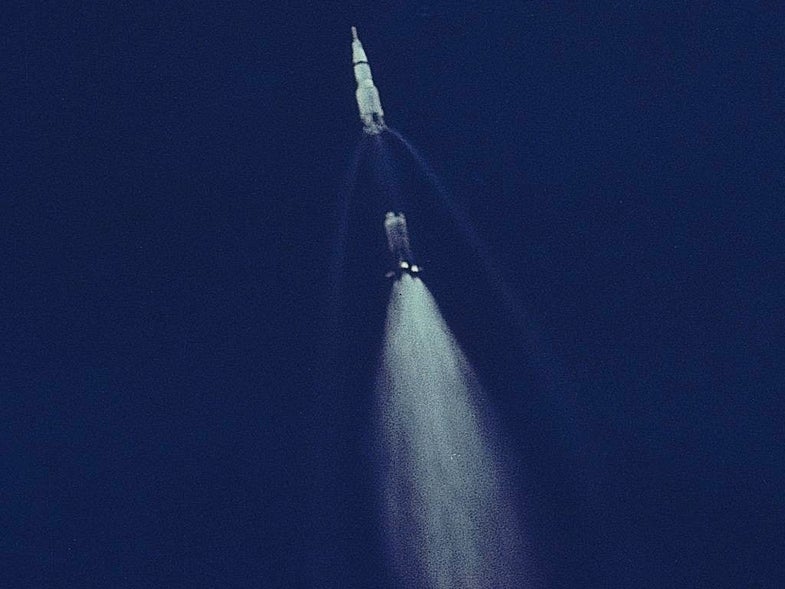 The S-IC falls away as Apollo 11 leaves for the Moon. NASA
SHARE

When the Sun rose on the morning of November 9, 1967, Cape Canaveral was quietly buzzing with activity. Along with birds and reptiles that called Merritt Island home was a 363-foot tall monolith, the first flight-ready Saturn V rocket primed to take flight from launch complex 39. Just after 7am, the ground shook as the rocket roared to life sending shockwaves through the nature preserve. Seconds later it began lumbering off the ground, slowly gaining speed as it cleared the tower and began arcing its way into orbit.

The Flight of Apollo 4 was the first all-up test of a Saturn V, making sure it could get an Apollo command-service module into to right orbit before putting the spacecraft through its paces. And that meant the rocket had to go through its complex and precise staging perfectly. 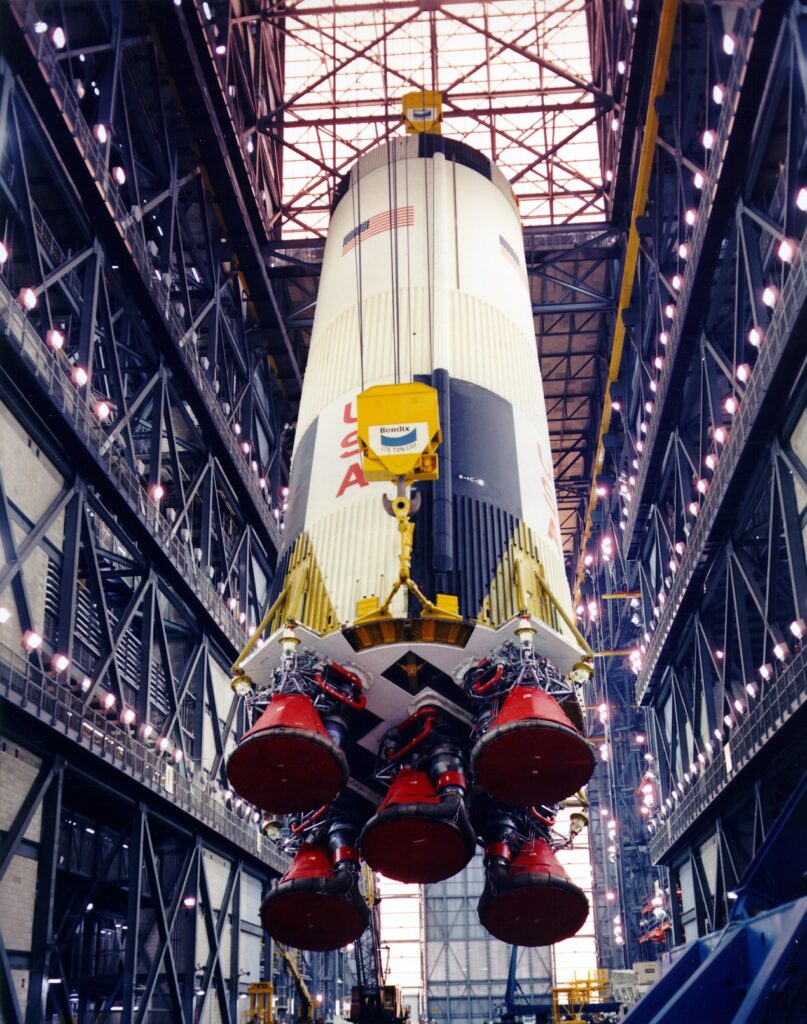 The first stage of the Saturn V, called the S-IC, was the stage that got the whole stack off the ground in the first place. At the base was a 24-ton thrust structure that held five F-1 engines that generated 7.5 million pounds of thrust. The centre engine was fixed but the four outer engines could swivel, guiding the rocket on its path into space. At the top of the first stage was a forward skirt that provided the connecting links between the S-IC and the second stage called the S-II. Made of 12 skin panels attached to three circumferential support rings, it held personnel access doors, umbilicals for telemetry cables, an environmental air duct, as well as eight solid fuel retro rockets.

The first stage’s flight was short; engine cutoff came at about 135.5 seconds after launch, the engines having burned through the available 203,000 gallons of Kerosene and 331,000 gallons of liquid oxygen. At that point, the Saturn V’s brain, the Instrument Unit, sent a shutdown command the centre engine. The four outboard engines kept firing until liquid oxygen or fuel depletion was sensed, and 600 milliseconds later, the outboard engines cutoff.

This cutoff triggered two things. First, the onboard computer sent a electric signal that activated a linear charge of exploding bridgewire that physically severs the two stages. This physically separated the two stages at about 205,000 feet. At the same time, the eight retro rockets fired providing 88,600 pound of thrust for just 0.666 seconds. This slowed the now spent stage, giving the S-II stage room for its engines to ignite. The S-IC, meanwhile, was carried to about 366,000 feet before it lost its upward momentum and started falling to the ocean, landing about 350 miles downrange from launch site. 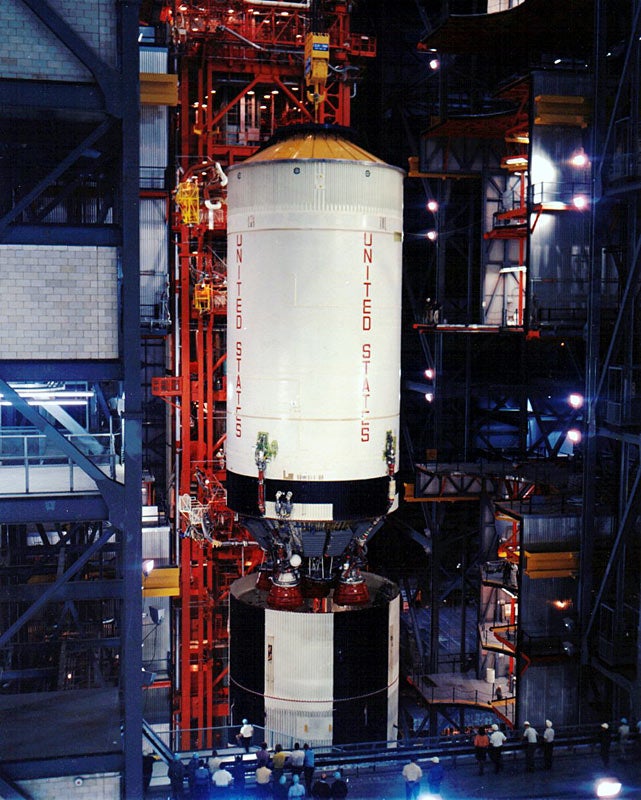 Apollo 4’s second stage is lowered onto the first during mating.

Adding more distance between stages were eight ullage motors on the aft end of the second stage. They fired for about 4 seconds, adding enough forward momentum to the rocket to force the propellants — cryogenic liquid oxygen and liquid hydrogen — into the feed lines to ensure the engines burned cleanly.

About 30 seconds after stage separation, the aft interstage on the S-II separated by explosive charges. The ring fell away, a precise manoeuvre since it had just three feet of clearance from hitting the engines. Then the stage’s five J-2 engines fired and burned for about 6 minutes, boosting the payload to about 605,000 feet. 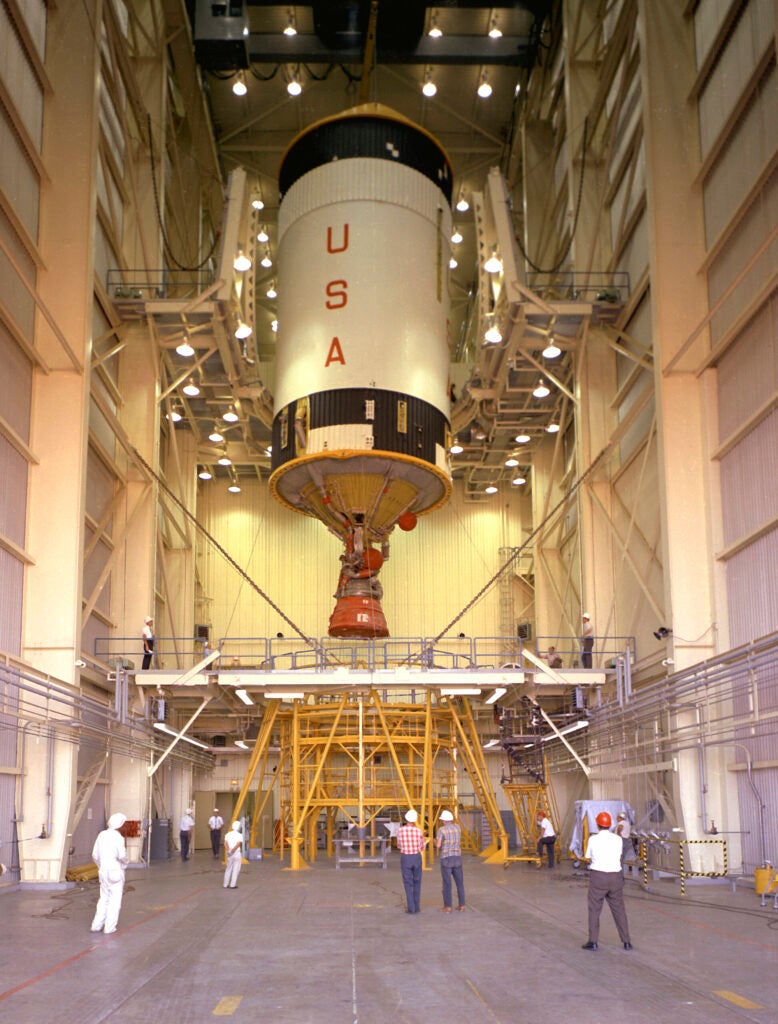 The S-IVB stage that helped launch Skylab II. The mission launched on a Saturn IB rocket, not a Saturn V, and in this configuration the S-IVB was the second stage, but it was the same structure as the Saturn V third stage!

About 10 seconds before the S-II engines ran out of fuel, an electric signal activated the separation system that severed the second from the third stage called the S-IVB. Severable tension strap, mild detonating fuses, and exploding bridgewire physically separated the stages. And again, coincident with separation, four retros on the now spent S-II stage slowed its ascent before it fell and landed in the ocean and four ullage motors on the S-IVB fired to both put distance between the two pieces and ensure fuel reached the feed lines going into the S-IVB’s one J-2 engine.

The S-IVB cut off after about 115 miles of flight, at which point the Apollo spacecraft was in orbit around the Earth. But it’s job wasn’t done. The S-IVB had the unique ability to relight. Not only was it the orbit insertion stage, it fired a second time for the translunar injection burn, the burn that sent the spacecraft out of Earth orbit on a path to the Moon.