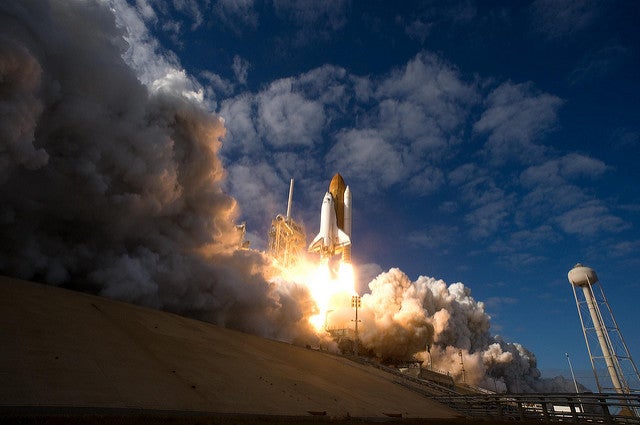 The following is excerpted from Chasing Space by Leland Melvin.

On my first day of spacewalk training in NASA‘s Neutral Buoyancy Laboratory at the Johnson Space Center, the future loomed in front of me as bright as the heavens I had hoped to reach. I wanted to master the fundamentals and, like all astronauts, I knew that spacewalk proficiency was the quickest path to that coveted first flight assignment.

The sooner I could fly, the more time I would have to spend off-planet getting my orbital shift on. There are almost 7.5 billion people living on Earth. Only 555 of them have ever flown in space. Of that number, 362 were American astronauts. It’s a very, very exclusive club, and as I prepared for the day’s trials, I was determined to join it.

I began my descent to the bottom of the cavernous pool that houses a submerged space shuttle and International Space Station to practice installing and attaching hardware with the goal of one day doing similar work on the real $150 billion space station orbiting high above the planet. I had completed many scuba runs in the pool before, but training for extravehicular activity (EVA) in the suit is more like walking in the weightless environment of space. It isn’t easy. The suit alone made me look like a cross between the Pillsbury Doughboy and the Michelin Man.

At a depth of ten feet, I noticed the little block of Styrofoam, called the Valsalva device, was missing. The device is usually attached at nose level inside the helmet to help a diver clear his or her ears by simply pressing the nose against it. Just a week earlier, I made sure to tell the technician that I needed it.

Through the helmet headset, I told test director Greg Sims that the device was missing. I enjoyed working with Greg. We met a few months earlier in Huntsville, Texas, when he administered the qualification dives for my scuba certification. I should have stopped the dive to get a new device, but I wanted to go on with my training. So, I convinced myself—and Greg—that I could continue without any problems. “Okay,” he said. “Just don’t hurt yourself.”

It didn’t take long before my ears felt full, like the pressure a passenger feels when a plane shifts in flight—only much worse. Desperate to clear my ears, I thrust my head forward to position my nose on the helmet neck ring, but it was too far out of reach. My doctors would later tell me that either my background as a professional athlete or my high tolerance for pain prevented me from realizing the true severity of my situation. Maybe. But, on April 3, 2001, I simply told myself that my ears would clear.

I knew something was wrong at twenty feet. “I can’t hear you,” I told Greg. “Can you turn the volume up?” I strained to hear a response, but all I got was static. I figured something was wrong with either the headset or the cable running from my suit to the pool deck as one kink in the cable could shut down the sound.

“Turn up the volume,” I shouted into the microphone, wondering why the men on the other end of the line were ignoring me.

Greg and his team began to raise me slowly up and down in the pool, thinking it might clear my ears in much the same way increasing altitude can do on an airplane. I still couldn’t hear Greg. Seconds later, I heard an irritating sound from the headset, followed by faint crackles and an obscured voice. Somebody was trying to tell me something, but I couldn’t make out the words. At that point, the training ended. As I floated toward the surface, I saw Danny Olivas, a fellow trainee, at the bottom of the pool ready to demonstrate his EVA skills. I know he was thinking, What the hell is going on with Leland? and probably wondering if my problem would delay his training.

Dr. Richard McCluskey, a NASA flight surgeon who was assisting with the exercise, was waiting for me. The technician who helped me out of my helmet was the same guy in charge of my “suit-fit check,” the test run of all the equipment I would use the day of my underwater training. He had asked me if I needed a Valsalva device, and multiple scuba dives in the Red Sea had taught me that I could only clear my ears by blocking my nostrils. So I had said yes.

The look on the doctor’s face told me something had gone wrong. In fact, I saw concern on everyone’s faces. They wereall mouthing words without sound, and I wondered why they didn’t just speak up. When Dr. McCluskey touched my right ear, I noticed the blood on his finger and began to feel it running down the side of my face. He quickly examined my ears and observed retraction of my tympanic membrane—the eardrum. Suspecting the problem occurred from the underwater change in pressure, he administered a nasal spray and politzerization, a medical procedure that involves inflating the middle ear by blowing air up the nose.

Dr. McCluskey then escorted me to the hypobaric altitude chamber, which simulates the experience of an airplane ascending in flight. At 10,000 feet, I didn’t feel any different but when the doctor tried to inflate my middle ear a second time, my ears began to clear. I could hear a little better.

According to the medical records, I could hear speech from about five feet away. However, when the chamber brought me back to sea level, my ears became blocked again, and I was unable to hear much of anything. All I could do was sit inside the steel tube, peering through the window at the faces of the doctors and technicians, and wonder if they felt any responsibility for damaging a member of the NASA family. After my stint in the altitude chamber, the room seemed to spin, and the walls, fixtures, and faces tumbled together in a confusing whirl. I threw up when I got to the shower. Thank goodness, I made it that far.

My next stop was the Flight Medicine Clinic, which wasn’t far from the Neutral Buoyancy Laboratory. The doctors there examined my ears and performed balance tests that I passed easily. Not bad for someone bleeding from his ear. Still, I couldn’t hear. The doctors then had me transported to Houston Methodist Hospital, where I was examined by Dr. Bobby Alford, a renowned ear, nose, and throat specialist. He admitted me to the hospital after a battery of hearing and balance tests revealed severe bilateral hearing loss. My treatment would consist of antibiotics, antivirals, and carbon dioxide to increase blood flow to the brain. Unfortunately, my doctors could not determine the cause of my deafness.