Why NASA Astronauts Just Spent A Week Living In A Cave

Spelunking as a space simulation 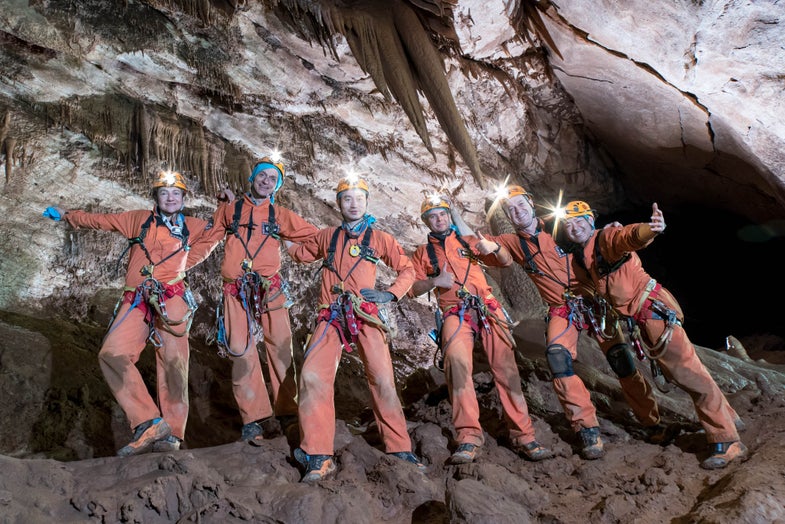 We tend to think of space as the final frontier, full of new and exciting worlds to explore. As such, it’s easy to forget there are still unexplored regions here, on our own planet. So it might seem strange to hear about a mission that sends astronauts deep underground in order to prepare them for future space travel.

This is exactly what the European Space Agency-led CAVES (Cooperative Adventure for Valuing and Exercising) mission has been doing since 2011. This year on July 1, a group of six astronauts—Pedro Duque of Spain, Aki Hoshide of Japan, Ye Guangfu of China, Sergei Korsakov of Russia, and Jessica Meir and Ricky Arnold of the United States—descended into the Sa Grutta cave system in Sardinia, Italy to take part in a grueling but exciting expedition to explore the sprawling, underground labyrinth.

“It really felt like we were in a true alien underworld, because it does not look like anything on the planet any one of us had ever seen,” said Jessica Meir, one of NASA’s newest astronauts. “This particular cave system we were in is 25 kilometers long. So it’s like a labyrinth of small tunnels and giant galleries, and there’s a lake branch with water. There’s so much diversity to it.”

The annual expedition is one of several space analogue missions, designed to sharpen skills and help prepare astronauts for the challenges of living and working in space. The crew set up a base camp 800 meters below the surface and spent six days exploring and mapping uncharted regions of the massive cave system, as well as conducting science experiments and characterizing local plant and animal life.

“I think we all would have loved to see something with a backbone, but it was mostly crustacean-like creatures,” said NASA astronaut Ricky Arnold. “Basically very small, invertebrates (like isopods) that had adapted to the cave environment. They were blind, they were white, and a couple we found are still in the process of being described by science, so technically they don’t exist yet, which is pretty cool.”

“These caves are like unknown frontiers,” he added. “Teeming with animals, plants, microbes that have adapted to life there over millions of years and no one has ever seen them before.”

Living and navigating in the caves is a phenomenal training exercise for astronauts as it offers a number of uniquely analogous experiences for the space travelers, including sensory deprivation.

“One of the similarities between returning to Earth from space and returning to Earth from underground is really the smell,” Arnold, who flew to the International Space Station in 2009, explained. “Opening that shuttle hatch and getting a whiff of Earth again is very similar to coming up from a cave because it’s a very sterile environment. At the end of our mission, I stood in the cave entrance and just took in these long, deep breaths. In every lungful of air you can smell all the plants and animals and it’s a really unique experience.”

“Smell-wise, the cave didn’t really have an odor,” Meir added. “But we smelled a bit a when we came back out of the cave.”

Neither Meir nor Arnold was bothered by living in the dark for six days. Both said they wished they could have stayed longer.

CAVES also offered a chance to practice the protocols and safety training that the astronauts will use in space.

Meir explained that the caves are in some ways further away than the space station. The crew estimated that for every hour away from the main camp you walked, it would take a day to rescue you. “In some cases you’re crawling through a tiny hole for many meters,” she said. “For example, if someone had a broken leg, it would take quite a bit of effort to rescue you. It would take longer to get help to you inside the cave than in space.”

Just like in space, a typical day in the cave was planned out from breakfast to bedtime. There were regular supply deliveries, daily mission briefings, and the crew dined on backpacking food, which is similar to space food.

Following a long, physically exhausting day, the crew enjoyed sharing meals together and learning about each other’s cultures, which was especially fun this year as the crew represented five different countries, and even featured the program’s first taikonaut (Chinese astronaut).

Teamwork is a big part of CAVES, just like in any space mission, and having a diverse crew is a big part of that. When you’re working as part of a small crew from different countries and backgrounds, in a confined space, teamwork is very important. Right now astronauts are strictly doing long-duration space missions, which typically last six months. Ensuring crew members have the skills necessary to solve problems and work together in close quarters for long periods of time is crucial to not only individual happiness, but also to mission success.

That’s where these analogue missions come into play. Getting to know other cultures and individuals from other space agencies is very important, especially to life on the space station.