The ozone layer is no longer thinning, but we need to keep an eye on it 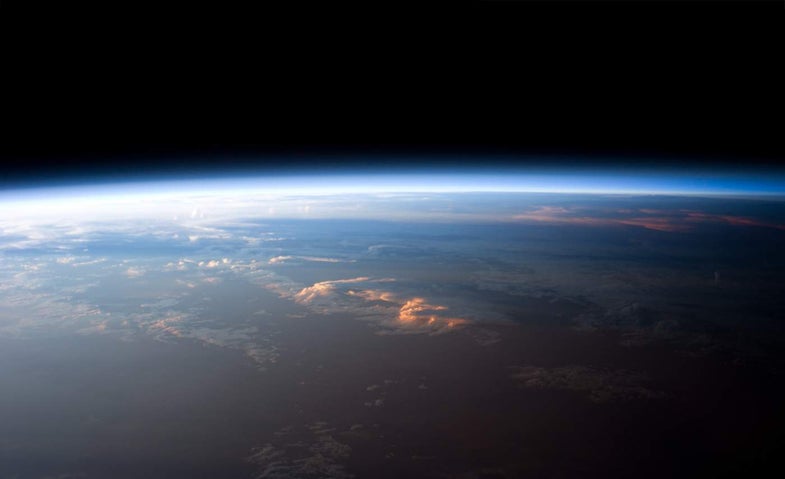 The ozone layer stopped thinning in 1997. Let's keep it that way. NASA
SHARE

If you should ever wonder how Earth’s ole ozone layer is holding up, rest assured. NASA is watching it hyper-vigilantly.

Two weeks after launching a refrigerator-sized machine into orbit, the space agency has attached the gizmo to the International Space Station. It’s called SAGE III (Stratospheric Aerosol Gas Experiment III), and its mission is to study “Earth’s sunscreen,” a layer of ozone found in the lofty heights of our atmosphere. For humanity—and life on Earth in general—ozone is crucial, because it protects us from the harmful ultraviolet radiation that incessantly bombards our planet.

Three decades ago, scientists from the U.K. found a massive hole in the ozone layer. Or more accurately, they found “a region of exceptionally depleted ozone”.

And the hole wasn’t the only concern. The ozone layer was diminishing all over. “Ozone was a global loss,” says Charles Hill, the SAGE III Instrument Scientist at the NASA Langley Research Center.

Apparently not too keen on the idea of the sun blitzing their citizens in harmful rays, global governments took action. In 1987, in a remarkable show of foresight, the United States joined nations from around the world to stop the ozone layer from further diminishing, in an agreement called the Montreal Protocol, which was eventually ratified by 197 countries.

Ozone’s foe comes from chemicals called chlorofluorocarbons, which are commonly found in hairsprays, refrigerants, and other household items. When these chemicals find their way into the ozone layer (and after a series of reactions) a free chlorine molecule destroys ozone—and there goes our atmospheric sunscreen. Thankfully, the Montreal Protocol phased out the use of chlorofluorocarbons.

“It’s a story of scientists finding the problem, doing their homework and presenting the evidence to the international community, so much so, that the community came together and acted,” says Hill.

Still, the ozone layer didn’t stop thinning until 1997. Now it’s recuperating, and scientists think that we’ll recover half of the ozone we lost by the middle of the century. This is where SAGE III comes in.

“How do we know that prediction is correct?” says Hill. “We need data for that. Our job is to go provide that data.”

Perched on the International Space Station, SAGE III will zoom around Earth 16 times a day, where it will “chase sunrises and sunsets,” explains Hill. SAGE III observes how sunlight is scattered and absorbed inside the brightly lit outline of the atmosphere, and in doing so, NASA scientists can measure how much ozone is present in different slices of the sky all over the globe.

SAGE III’s predecessor, SAGE II, stopped working over ten years ago, leaving other instruments on land and in space to keep watch over Earth’s ozone. But with the addition of SAGE III, these efforts will improve. “SAGE is the gold standard in ozone measurements—it is highly accurate and highly precise,” says Hill.

Ensuring that the ozone layer returns to health is of profound importance to us relatively hairless and exposed humans. Just a one percent decrease in the ozone layer can lead to a four percent increase in skin cancer, according to research.

So how can we avoid those pesky ozone holes while our global sunscreen recovers? It’s helpful that the patches form seasonally over the South Pole, far from the vast majority of human foot traffic. But should you go, watch out. “You can get sunburned pretty easily if you were standing under an ozone hole. You do have to be careful,” says Hill.

For those interested in some very slowly developing drama, NASA keeps good track of the ozone hole, and you can watch it here.

Although it’s invisible and hovers far above us, it’s important to remember that life on Earth couldn’t survive without the ozone layer, and the ozone layer couldn’t survive without life, explains Hill. We’re in this together, it seems. Ozone molecules are composed of three oxygen atoms, and photosynthetic life creates those building blocks. In turn, the ozone layer keeps solar radiation from sterilizing the Earth’s surface and making it an uninhabitable rocky desert, devoid of any surface life.