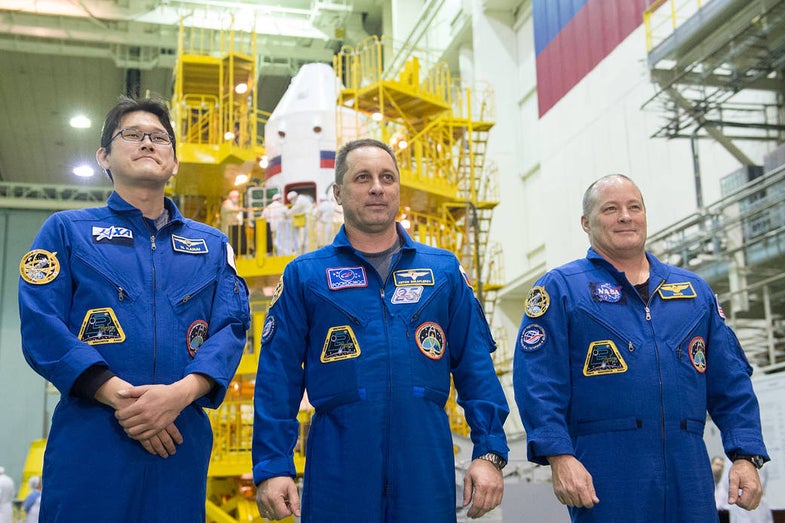 The human body is meant to exist under the force of gravity. So when we do crazy things like send it up into space where the weight of this force is slim to none, weird things are going to happen. Here’s one: On Twitter this past Monday, Japanese astronaut Norishige Kanai proudly claimed that after spending three weeks on the International Space Station, he had grown three and a half inches.

What? It’s indeed a well-established fact that spending time in places with zero-G can cause the spine to lengthen a bit, but three and a half inches sounded too good to be true to his fellow astronauts. He remeasured, and it turns out he’s only grown around two centimeters—not quite an inch.

Perhaps he was excited about that holiday gift of height. Unfortunately, once he returns to Earth and all its gravitational pull, his body will quickly shrink down even from this more modest increase.

Still, two centimeters is not nothing, and it’s a reminder that spending time in space changes our bodies in strange ways.

Kanai is not the first astronaut to report a height increase while spending time in space. When NASA’s Scott Kelly returned to Earth back in March of 2016, having spent almost a year on the International Space Station, he came back about two inches taller. Spending time in a zero-G environment like that of the International Space Station causes the spine to stretch. On Earth, gravity keeps the vertebrae in place by constantly pushing them together. But without gravity, the vertebrae will naturally expand slightly, causing a person to become taller.

Typically, astronauts in space can grow up to three percent of their original height, but no more—which is why Kanai’s announcement took his fellow spacefarers by surprise. After a few days or weeks back on Earth, gravity compress a person back down to their original height.

Zero-G environments also come with a large list of other potential side effects to the human body, and not all of them are as fun as a sudden boost in height. Unfortunately, not many humans have spent enough time in space for scientists to truly understand those downsides. We are beginning to understand a few. We know that a lack of gravity can change how blood and other bodily fluid naturally flows throughout the body, pushing all the fluid upward. This creates pressure and swelling in certain areas, particularly behind the eyes, which can cause vision problems. Another big issue is, of course, radiation. Within the confines of Earth’s magnetic fields, humans are protected from much of the radiation spewed by our powerful sun. But up in orbit, we are far more vulnerable. This constant exposure can increase your risk of cancer.

But just as health on Earth can vary quite a lot from person to person, space affects individual astronauts in unique ways. For this reason, NASA is studying both Scott Kelly and his identical twin Mark. The two are both astronauts. But Scott spent an entire year on the ISS while Mark remained on Earth. During that year, NASA and other researchers monitored both brothers’ health, and have continued to do so in the hopes of better evaluating the temporary and long-term physiological changes associated with spaceflight. This is going to be particularly useful in the coming years, as plans to bring people to Mars—an extended space trip indeed—press on.

So if you do wish you were slightly taller, consider becoming an astronaut who participates in longterm space missions. But remember to relish your extended height when you’re up there, because it’s all downhill once you’re back on Earth.

A version of this article originally ran on March 3, 2016. It has been updated.