NASA Needs To Harness The Genius Of Crowds

What we learned at a space conference that puts inclusivity first Between late 2009 and early 2011, NASA’s Wide-Field Infrared Survey Explorer (WISE) mission scanned the whole sky in infrared light not once, but twice, snapping photos of over 745 million objects in the process. This catalog led to the discovery of the most luminous galaxy in the universe—brighter than 300 trillion suns—and is being used to discover new planets.

But if you think such discoveries can only be credited to NASA’s elite, think again.

Last month, the Dent:Space event, hosted at the Palace of Fine Arts’ Innovation Hangar in San Francisco, showcased the surprising variety of ways people outside the aerospace industry are contributing to space exploration.

The WISE mission, for example, relied on the fact that planets seem to be born when gas, dust, and rock chunks form disks around young stars. These disks shine brightly in infrared, but pinpointing them is difficult because other astronomical objects (such as galaxies, nebulae, and asteroids) do too. As NASA explained in a press release, “There may be thousands of nascent solar systems in the WISE data, but the only way to know for sure is to inspect each source by eye, which poses a monumental challenge.”

At Dent: Space, NASA program executive Jenn Gustetic took the stage to explain how the agency is enlisting the help of citizen scientists through a site called Disk Detective. The sign-up process is fast and easy: A few days after the event, I enlisted as a citizen scientist in a matter of seconds. After a quick-and-easy tutorial, I spent my Saturday morning examining potential planetary nurseries. 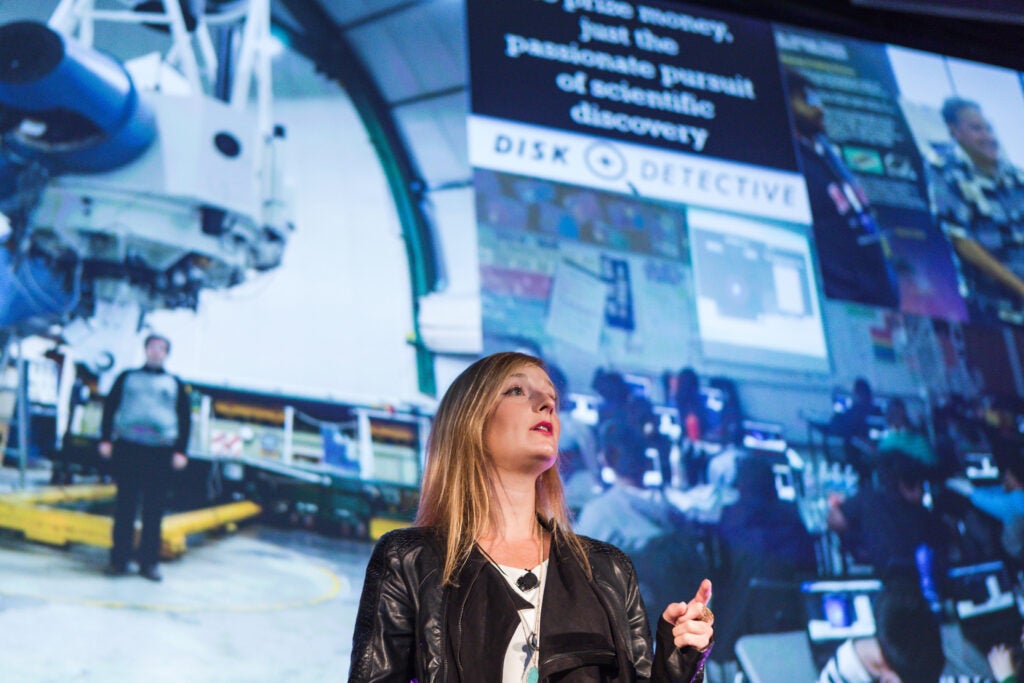 Indeed, it would have been hard to leave Dent:Space and not be inspired to get involved. During the two-day event, attendees could build a replica of the Viking spacecraft at one booth, or find out how CubeSats work at another. Down the hall, folks lined up to explore outer space through virtual reality. A child dressed as an astronaut met NASA astronaut Yvonne Cagle, while a college freshman and aspiring aerospace engineer chatted with Mary Roach, author of Packing for Mars and other popular science books, and got a postcard from Pluto. In every situation, the professionals encouraged amateurs like me.

As co-founder Steve Broback said, “A lot of people have no idea this work is open to them.” Dent:Space is actually a space-centric spin-off of the annual Dent the Future gathering. Broback and co-founder Jason Preston first held a Dent the Future conference in 2013. Named after a Steve Jobs quote (“We’re here to put a dent in the universe. Otherwise why else even be here?”), the annual gathering emphasizes interdisciplinary innovation. That idea laid the foundation for this year’s first Dent:Space. 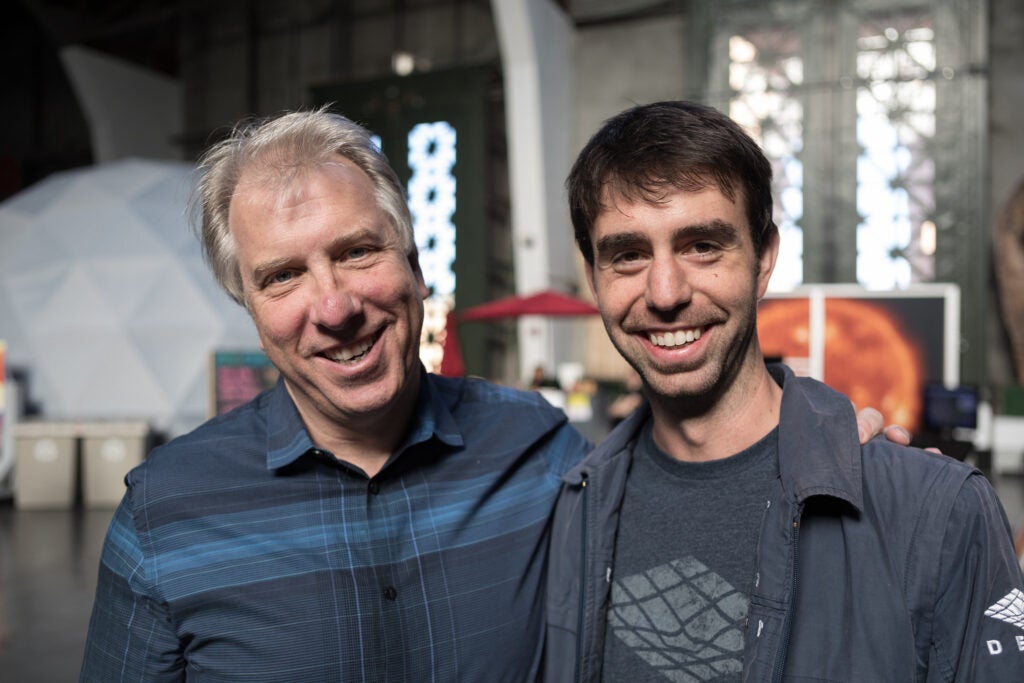 Crowdsourcing is crucial not just to provide additional manpower, but also to harness the creativity non-professionals have to offer. Everyone from NASA researchers to student researchers, hobbyists to professors, and authors to designers took the stage at Dent:Space.

New technology means new experts, Preston said. If he were to break his arm, for example, experts would already know how to go about solving that problem. Space, on the other hand, is often about the unknown. As a result, creativity is indispensable. “It’s not just about pointing to the moon or Mars,” he said. “It’s about motivating people to bring their own ideas.”

Karim R. Lakhani of Harvard Business School has demonstrated the value of outsider perspectives for NASA. A few years ago, he encouraged the space agency to hold a contest to maximize the solar power output of panels in a space station.

“It’s kind of ridiculous actually that NASA would say: We’re going to go to any random person in the world and ask them to suggest a solution for us,” Lakhani explained in 2013. “But that’s what we convinced them to do.”

Over 2,000 code submissions came in from 459 people around the world—none of whom had a background in astronomy or astrophysics. Despite such “outsider” status, some of the competitors created solutions that produced more solar power than NASA’s own designs.

These results directly influenced Dent’s founders. Preston, who studied under Lakhani, says that crowdsourcing won’t work in every situation: “The vast majority of what comes in from outside is not as good as the internal solution.” However, he added, “Then there’s a tiny sliver that’s notably better. And to get the whole gamut of those responses externally was a fraction of the cost of the internal development.” 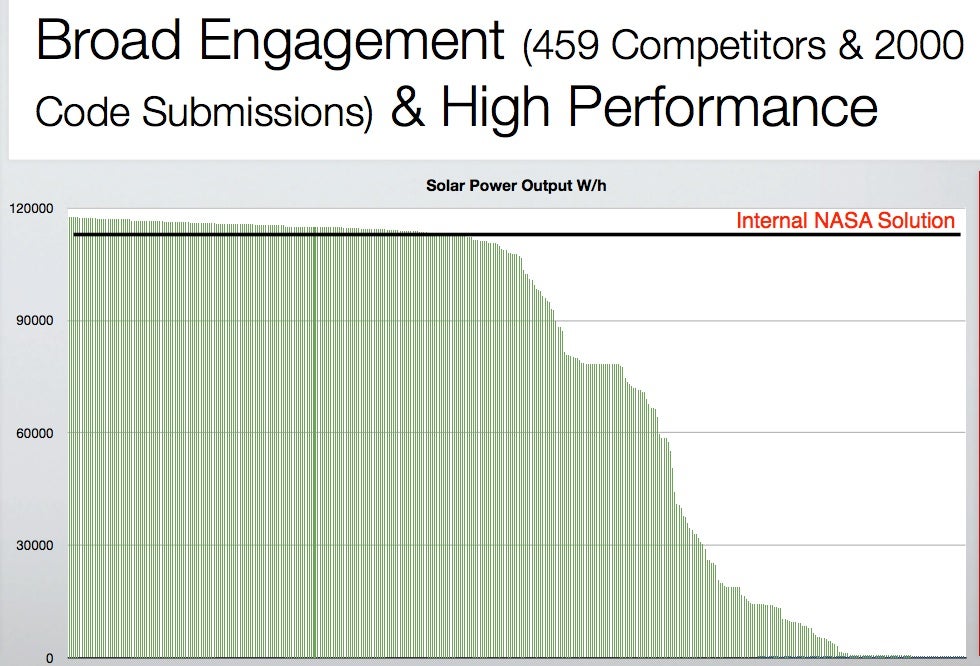 The event’s co-founders and organizers were fond of saying that it’s important to get more than the “usual suspects” involved. Indeed, Dent:Space’s emcee and speaker Ariel Waldman is a prime example of an “unusual suspect.” Waldman went to art school and never considered herself a space or science geek. But after graduation, a space documentary piqued her interest.

“The thing I thought was cool was that all the mission control people were admitting they didn’t really know anything about space exploration and were having to figure it out as they go along,” she said.

That inspired Waldman to cold-email NASA and express her interest in contributing. Not long after, NASA actually hired her. In addition to serving as an adviser to NASA’s Innovative Advanced Concepts program, Waldman also penned the book What’s It Like In Space? and founded spacehack.org, a directory of ways (including the Disk Detective project) to participate in space exploration. Waldman especially wants those who don’t identify as space geeks to realize there are opportunities available. “It’s not something where you have to drop everything and get a PhD or even work at NASA,” she added.

This is only Dent:Space’s first year of existence, but unusual suspects have been helping NASA for years, contributing to past space successes such as Viking, the first U.S. mission to land on and take images of Mars. Rachel Tillman, founder and curator of The Viking Missions Education and Preservation Team, spoke to Popular Science about the overlooked importance of art created by “outsiders.”

Take Jim French, who worked on propulsion for Viking. He was inspired by writers outside the aerospace industry, starting with Buck Rogers, a character in Philip Francis Nowlan’s space opera Armageddon 2419 A.D. Similarly, Noel Hinners was influenced by War of the Worlds, while numerous Viking team members were fans of science fiction writers Robert Heinlein, Isaac Asimov, and Ray Bradbury.

Future engineers don’t just need creative work to inspire them—according to Tillman, it’s also important to equip engineers with creative, philosophical thinking. Tillman says this intersectionality is necessary for breakthroughs to happen. “What’s really unique about [Dent:Space] is that it’s bringing together fundamental traits that have been isolated and siloed over the past 30 years of public school education,” she said.

Involving people with diverse educational backgrounds is only one component of inclusion. The speakers at Dent:Space also pointed out the need to involve women and people of color.

Most space-related events skew heavily towards engineers, and Department of Education data shows 85 percent of aerospace engineering degree-holders are men. The scales were much more balanced at Dent:Space: 54 percent of speakers were women. Racially, there was less parity, as just 18 percent of speakers were minorities. But overall, the speaker line-up offered greater cultural diversity than is standard at many industry conferences.

Mechanical engineering student Camille Eddy, of Boise State University, and engineer Dr. Christianna Taylor, a recent graduate of Singularity University, are both women of color and emphasized the importance of representation when they discussed their personal paths to the aerospace industry. “I got interested in the field when I was 12 and saw Mae Jemison, the first black female astronaut [in a documentary],” Eddy explained.

Dr. Taylor also cited Jemison as someone she emulated from a young age. “I am lucky I had those role models,” she added. “Mae Jemison didn’t…and she did it anyway.”

Waldman played a leading role in putting together the speaker line-up and, to her, the importance of representation is obvious. “I didn’t put together the majority of this line-up thinking: We’re doing this for diversity,” she said. “I did it because I know there are amazing people doing orbital debris, planetary science, and everything, who are not all white dudes. This event is a reflection of all the people I interact with. It frustrates me when people think diversity is a bonus.”

Despite the relatively diverse lineup of speakers, the attendees still skewed white and male. However, Waldman told Popular Science, “In terms of backgrounds of people who are here, I’ve been really impressed: There have been musicians and fashion designers, space scientists, all different areas.” In terms of cultural diversity, she admitted there was work to be done.

While Dent:Space’s organizers opened up 3,000 tickets to the public free of cost in a push for socioeconomic diversity, Waldman says the next step would have been to more proactively communicate the opportunity to under-represented communities. “To look at any conference and be like, ‘Well it’s better than everyone else,’ is not good enough. In terms of reaching out to the Latino community, people of color here, I don’t think there was much effort put in when it comes to the attendees,” she said.

Considering the positive impact diverse perspectives have on innovation, Eddy says, cultural diversity should be seen as a necessity instead of a bonus. “I’m trying to broaden the community, not because I feel uncomfortable, but because it’s lacking,” she said. “We’re obviously not filling in some type of hole that could be used to make our research better.”

Despite the fact that there’s more work to be done, it’s hard to discount the progress on display at Dent:Space. Consider the college freshman who met Mary Roach, among other impressive speakers. The student’s excitement was palpable and, when asked why, she listed off all the people she’d encountered at Dent:Space who she could see herself becoming. It didn’t matter that she was a woman—just as, for other attendees, it didn’t matter that they weren’t in STEM. The message was clear: Everyone can and should contribute.

As such, Dent:Space was one small step for the aerospace industry in making a new level of inclusivity and innovation the norm.

Alyssa Oursler is a freelance writer based in San Francisco. You can find her on Twitter @alyssaoursler.