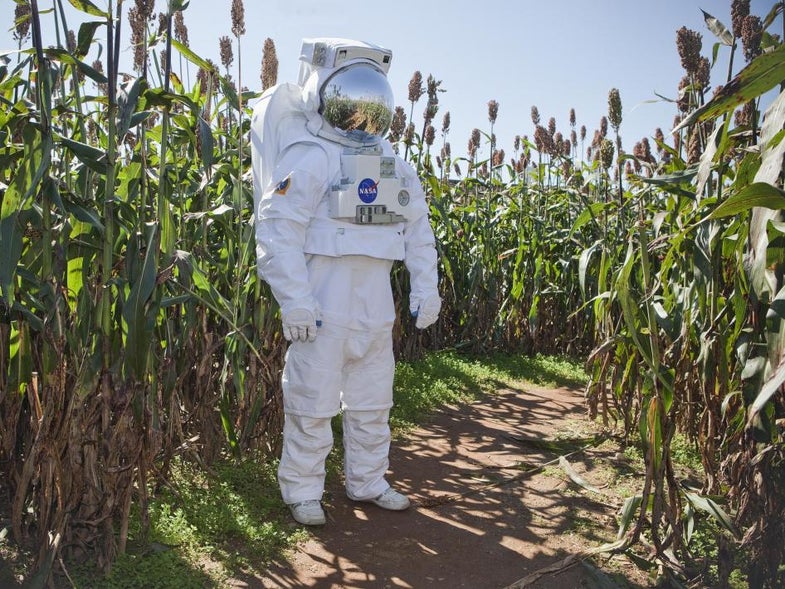 Since its earliest missions, NASA has been focused on food, something astronauts need whether they’re at home on Earth or orbiting 250-odd miles above it. Over the years, the administration has tried a series of solutions: John Glenn had pureed beef and veggie paste, other flight crews used new-age freeze drying technology. More recently, NASA’s been trying to enable its astronauts to grow their own food in orbit.

Bryan Onate, an engineer stationed at the Kennedy Space Center, is on the forefront of this technology. He helped lead the team that built Veggie, NASA’s first plant growth system, and next month he’s sending up Veggie’s new and improved brother, the Advanced Plant Habitat.

The habitat is the size of a mini-fridge. But instead of storing soda, it will carefully record every step in the growth of plants aboard the space station. This will allow researchers on the ground unprecedented insight into how plants are shaped by microgravity and other forces at work in outer space. And, Onate says, “astronauts may get to enjoy the fruit of our labor.”

Though it’s small, the new habitat is equipped with over 180 sensors and three cameras. The sensors will record data about temperature, moisture and oxygen in the unit. The cameras—one of which is infrared—will provide further insight into what’s happening in the chamber. All of the data is processed by a computer named, with NASA’s characteristic acronymic humor, “PHARMER”—Plant Habitat Avionics Real-Time Manager in Express Rack. “It’s really, truly a scientific toolbox,” Onate says.

Except for installation, the system should run with very little input and cut down on the astronomical (wink wink) cost of shipping food to the station. Currently, it costs more than $10,000 a pound to send food and other supplies hurtling upwards. That means your typical 14 ounce loaf of bread—just $3.35 here on Earth—would cost somewhere in the ballpark of $8,750 to send to space. Plus, the freshest stuff doesn’t last long. “If I pack a bag of cherry tomatoes…My tomatoes are going to only be good for a week or two maybe,” Onate says. “But if I take seeds with me, I can grow food.”

One of the habitat’s real innovations is its light. The sun emits about 2,000 micromoles to Earth. NASA’s new habitat will put out 1,000, or half the light of the sun.

That’s a crucial source of luminescence for the plants, which need a glow to grow, but don’t receive it on the space station, which, like the rest of space, is always cloaked in darkness. NASA researchers hope to test the red, green, blue and white spectrum lights at different intensities to find out what best stimulates plant growth. “We can really target a light treatment,” Onate says, “just so we can start learning the differences.”

Ultimately, the habitat is more of a research project than a bonafide space farm. But Onate sees it as the first step in a larger mission to make human life sustainable off-world. “In the future, on Mars, if we colonize out there, resources are a premium,” he says. The key will be finding a way to manage plant growth long-term, in settings we’ve only just begun to understand.

“These [plant projects] are all the little footsteps we’re taking to understand” how to keep humans in space more permanently, he says. And one day soon, NASA may take the giant leap to self-sustainable space farming.