They happen about once every 18 months 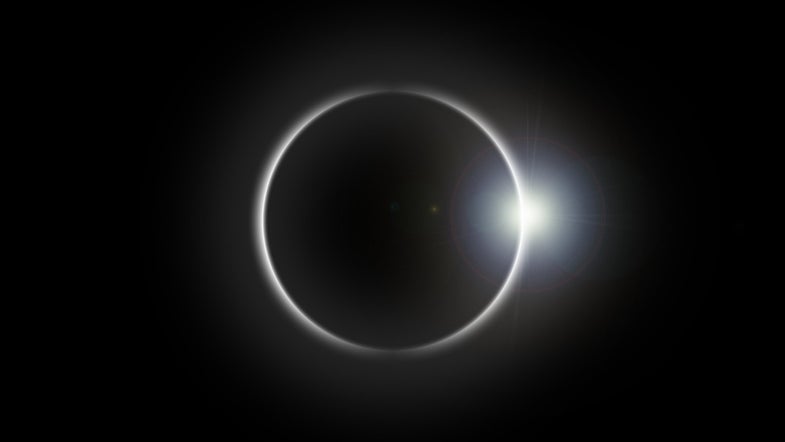 A syzygy feels magical, and not just because it gets you at least 25 points in Scrabble. The whole concept of celestial bodies aligning feels poetic. When it results in a total solar eclipse here on Earth, you can feel for a few moments as though you’re part of something much greater and grander than yourself. The transience only makes it more beautiful. Which is why thousands of people will flock to the path of totality on August 21, 2017: to witness a once-in-a-lifetime phenomenon.

And it will happen all over again 22 months later. Minus the traffic.

That eclipse will happen mostly over the Pacific Ocean, though it will cross over southern Argentina and Chile towards the tail end. Total eclipses of the sun feel so rare because it takes so long for them to occur in the same place again. Hundreds of years pass between those recurrences, and if you’re not willing to travel around the globe to witness another, you’re likely to only see one in your lifetime. If you wanted to chase them, though, you could see an eclipse about every 18 months.

And that’s just total eclipses. Between partials and annulars, there are usually two or three solar eclipses every year. A partial eclipse is, as the name implies, when only part of the Moon covers the Sun. An annular eclipse is exactly like a total eclipse, except that the Moon isn’t close enough to Earth for the relative size to fully block the Sun’s rays.

So why do solar eclipses happen anyway?

It’s only when the Moon is close and directly aligned with the Sun that we experience a total darkening like the one Americans will witness this August. And to understand why that happens periodically, you first have to understand how the Moon goes around the Earth.

Bear with me, here. I know you think you already understand that, but let’s start with a quick question: Given that a new moon (the opposite of a full moon) occurs whenever the Moon is between the Earth and the Sun, why do we not have an eclipse every month? If you already know the answer, congratulations! You’re an astronomy buff—don’t rub it in. For the rest of the population, here goes.

The Moon goes around the Earth once every 28 days. During that time, it goes from full to new and back to full again. Here’s a pretty good graphic that shows you what the Moon looks like at each stage:

The only part of the Moon that you see from Earth is the bit illuminated by the Sun because it doesn’t produce its own light, it just reflects solar rays. When it’s gone a quarter of the way around, you see the half of the Big Cheese that faces the bright, shiny ball of flaming gas and plasma. And the same thing happens when it’s gone three quarters. The full moon occurs when the whole face can reflect the Sun’s light, or when the Moon is “behind” the Earth.

That might seem a little weird to you. If the Earth is between the Moon and the Sun, shouldn’t the Earth be casting a shadow onto the Moon, thereby preventing us from seeing it?

We call this phenomenon a lunar eclipse, and they don’t happen every month either. (And you can actually still see the Moon, it just looks blood red because the Earth’s atmosphere has scattered every other wavelength of light). The reason they don’t happen monthly is simple: All three celestial bodies would need to lie in the same plane for that to happen, and as it turns out, they don’t.

Here’s a picture of what eclipses look like to help you out:

Everything is lined up in a perfect syzygy. This doesn’t happen in most lunar cycles because the Moon isn’t traveling in a nice, even plane with the Sun. It orbits at an angle, such that most of the time it’s a few degrees off (on average, about five).

The Moon is actually casting a shadow at these times, it’s just that the shadow misses our planet. Partial eclipses happen when we just miss perfect alignment.

So in a way, it is kind of magical when everything lines up at just the right time and at just the right angles to produce a total solar eclipse. It’s just that the Moon is circling the Earth so frequently that you end up with those conditions every year and a half on average.

The Moon is drifting away from us. It’s not anything we said or did, it’s just how things are. See, every time the Moon pulls the oceans up into tides, our own planet’s rotation slows a tiny bit and the Moon’s orbit increases. This has to do with a transfer of angular momentum between the two bodies, and means that the Moon is getting farther away from Earth by a little more than two centimeters a year.

By some estimates, that means that in about 1.4 billion years the Moon will be far enough away that it won’t be able to totally block out the Sun’s light. So at some point, there will be One Final Eclipse, if only humans can survive long enough to see it. Just imagine the traffic.