We’re three million miles closer to the sun in January than we are in July. So why isn’t it hot?

It turns out proximity is pretty inconsequential. 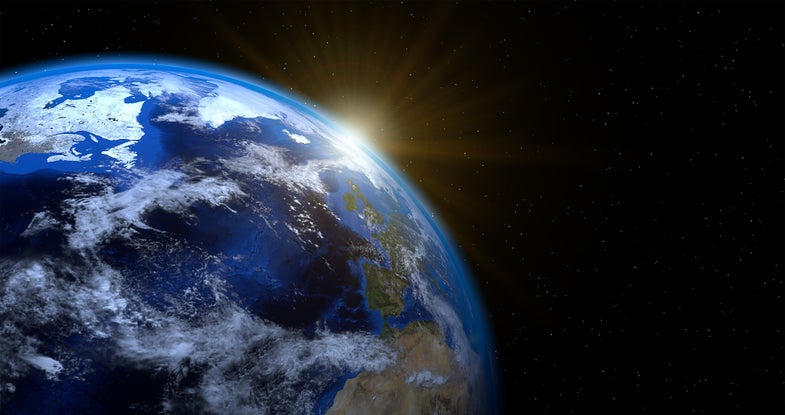 There’s something about the geometry of space that’s never quite made sense to me. I know that the axial tilt of the Earth is the reason we have seasons, but if a slight angle away from the sun can make me see my breath in winter, why does being three million miles closer not make me melt in a pool of my own sweat? Is it really not any hotter when we’re at our shortest distance from our star? And if it is, then why should the 23.5° tilt to our axis matter at all?

I have to re-Google these questions every year at the perihelion, the point at which we’re the closest to the sun. Despite December 21 being the shortest day of the year in the northern hemisphere, it’s not until early January that we reach perihelion, when Earth gets the most intense dose of solar rays it will receive all year. Averaged across the whole globe, we’re getting sunlight 7-percent stronger in January than we are in July.

But it turns out that our distance to the sun actually has very little to do with the temperature we experience. It has far more to do with the angle at which the light hits us.

Light coming in at 90° hits as directly as possible. At the peak of winter in the northern hemisphere, the sun’s rays are pointed right at the Tropic of Capricorn, which is 23.5° below the equator. That band is getting the most direct light. Everywhere else is getting hit at an angle, and that means that the same energy in each metaphorical ray is spread across a larger area, weakening the heating effects at any given point.

Let’s imagine a one-mile-wide beam of light (and forget that there’s a third dimension for a sec, just for simplicity’s sake). At 90°, that beam is putting all its energy into heating up a one-mile stretch. But at a 30° angle, that same light will be spread across two miles, thus halving the intensity at each point. You can visualize this even better with a small flashlight. Point the beam at a vertical piece of paper and you see a direct circle of light. Angle the paper and you get a more diffuse ellipse. This is almost exactly what’s happening with Earth, except that our planet is round and made mostly of rock.

Our proximity to the sun would matter more if it heated us via convection. Like a hot oven, convection relies on a medium like air to carry heat to the target. But space is a vacuum, and without a gas or liquid to carry convection heat, the sun has to use radiant heat. Electromagnetic waves carry energy that heats molecules of air and earth on their arrival, rather than being hot when they arrive and transferring that heat. It’s the same kind of heating that makes a bonfire so hot on your face but not on your back—the fire isn’t warming the air, it’s sending out energy waves that causes your skin to heat up. The sun is over 90 million miles away at any given time, so adding or subtracting 3 million clicks doesn’t make a difference in radiant heat that we can notice.

The more intense sunlight is, the more energy it’s carrying and the more radiant heat it contains, so it’s really the intensity of the beams that matter, not how close we are to the source. Less intense sunlight in the northern hemisphere during January, combined with fewer hours of heating each day, means a colder winter the farther north you go.

But all this brings us to another question: if the southern hemisphere gets more intense light during its summer, does that mean January is hotter down there than July is up here?

Surprisingly—after telling you specifically that light intensity is what matters—it’s hotter during northern hemisphere summers. Even though we get less heating potential from the sun, there’s more land mass up here. The south has far more water in its oceans, and since water can absorb a lot of heat without increasing in temperature very much (this is called high specific heat capacity), a place with lots of water will be cooler. Land heats up fairly quickly, so despite a lower light intensity, northern summers end up hotter.

There you have it. We’re now getting farther and farther away from the sun until we reach our most distant point—in the dead heat of July. That’s space geometry for you.