Hey everyone. I’m out of town for the holidays, but given the recent passing of the winter solstice, I thought... 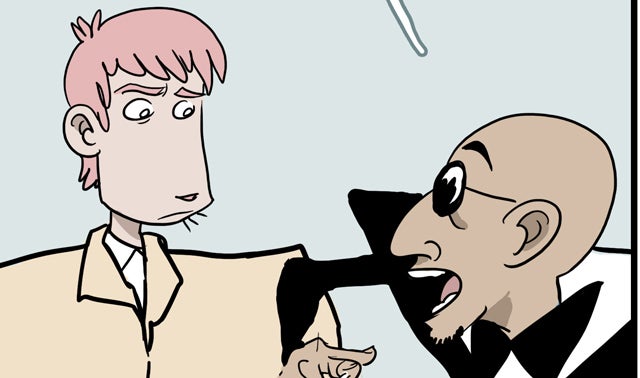 Hey everyone. I’m out of town for the holidays, but given the recent passing of the winter solstice, I thought this comic about a common urban myth was appropriate (given that it pops up at just about every astronomical event). The post was originally published on May 11, 2012 as part of a series on Lunar Perigee, AKA the “Super Moon”

It’s been about a week since lunar perigee, but I’ve still got one or two of these in me. Today we join Oz and Matt exploring a terrestrial phenomenon that rears it’s yolky head at every celestial occurrence. That’s right, balancing eggs.

So far I haven’t seen anybody claim that you could balance an egg during the “Super Moon” but there were credulous rumors making their way around the web reporting that you could stand eggs and brooms on end during April’s solar storm. I unfortunately found out too late and set this comic aside, figuring I’d use it for an equinox or solstice. Thank the moon for bringing it to you today. The myth goes like this: During the equinoxes (the point where the Earth’s axial tilt is neither pointed towards or away from the sun) it is possible to balance an egg on end. Now a simple rule of skepticism I always use when confronted with a dubious claim is to ask the claimant to take it one step further and explain how the phenomenon works. Most of the time, people have not thought even this far ahead.

Further inquiry will get you answers like, “You know. Gravity.” or “I dunno, magnets and witches or something.”

The truth is, the Earth’s axis doesn’t flip1 (only its orientation in relation to the sun changes), and you can balance an egg on any old day. It happens that standing an egg or broom is one of those things that is just difficult enough to do that, when pulled off, people attribute it to some sort of irregularity in local gravity or God being extra helpful. Days like the equinoxes are picked because people love the idea “balance.” Ahh, say it with me, “Balance.” Now imagine it in a meadow with flowers and people in flowing clothing. They all have yoga mats, too. Sometimes other astronomical events are arbitrarily picked to be “egg balance days.” I’d love to hear the solar storm explanation, that takes some imagination.

Lunar perigee makes more sense, as the moon’s proximity causes a greater tidal pull—standing eggs up and plucking airplanes out of the sky. That’s how it works, right**?

Standing eggs up on end is actually pretty easy once you get a feel for the technique. I had a row of three going at home, but then cats. If you want to perform such wizardry, you have only to look to our friend Phil Plait. He’s written about this a couple times, including on his old site which contains all the tell-tales of the early internet awkwardness, so I won’t link it here. Instead, go to the more recent entry, where you can master the techniques that will allow you to bend gravity to your will, then use this immeasurable power to stand eggs up. That’s science!

This post was brought to you by Actinium (Ac).

1It does wobble a little.