Why hasn’t the sun burned out yet? 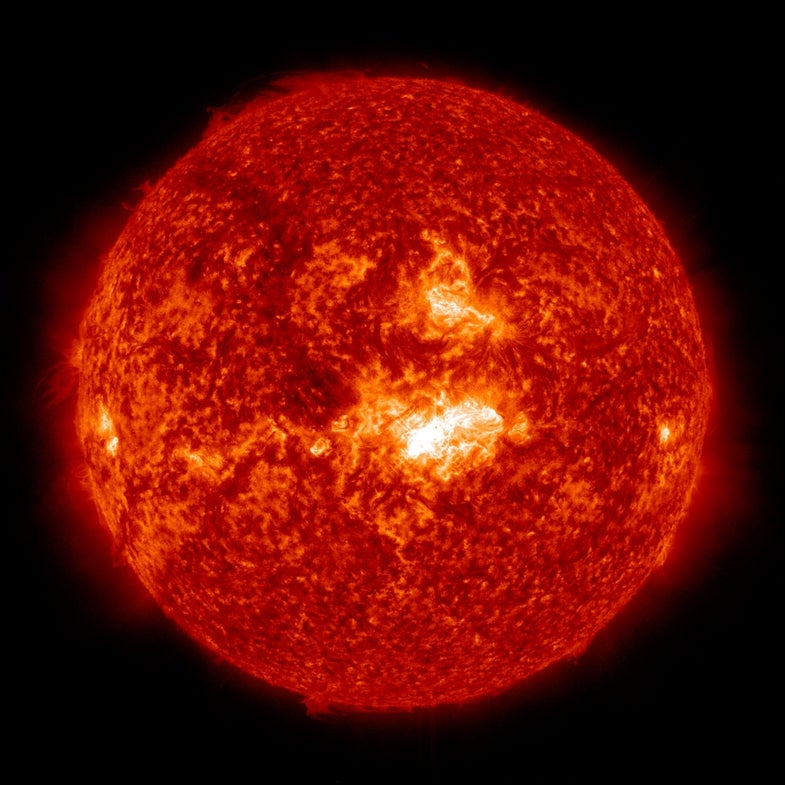 Our sun is a fairly average star in the Milky Way—not the brightest, not the biggest, and only 4.5 billion years old. It’s only unique in that its light and heat sustains all the life on the only inhabited planet we know of in the universe. Luckily for us, it didn’t burn out before we showed up a few hundred thousand years ago. But how could it have that much fuel? Why hasn’t it been snuffed out like a candle or a campfire? And when will it finally burn out?

This was a pressing question in the 19th century, says Catherine Pilachowski, an astronomy professor at Indiana University. At the time, humans only understood two ways the sun could be generating energy: Either it was creating heat and light through gravitational contractions—pulling itself in at the center and emitting energy (in the form of heat that we feel on Earth), therefore getting smaller over time—or it was literally on fire, like the chemical reaction we see on Earth when we light a match or start a campfire. Thinking that either method could have been the sun’s modus operandi, scientists at the time calculated exactly how long the sun could have existed using both methods. But neither result squared up with what we knew the age of the solar system to be—4.5 billion years. If the sun were contracting or burning, it would have run out of fuel long before we came around. Clearly, something else was going on.

A few decades later and armed with Einstein’s famous E = mc2, which confirmed anything that has mass must have an equivalent amount of energy, 1920s British astronomers proposed that the sun was actually converting its mass into energy. However, instead of a furnace that converts wood and coal into ash and blackened carbon (emitting light and heat along the way), the center of the sun is more like a gigantic nuclear power plant.

The sun contains a massive number of hydrogen atoms. Typically, a neutral hydrogen atom contains a positively charged proton and a negatively charged electron that orbits it. When this atom meets one of its fellow hydrogen atoms, their respective outer electrons magnetically repel each other like bodyguards. This prevents any of the protons from meeting each other. But the sun’s core is so hot and so pressurized that atoms whiz around with so much kinetic energy that they overcome the force binding them together and electrons separate from their protons. This means the protons, usually stuck inside the hydrogen atom’s nucleus, can actually touch, and they join together in a process called thermonuclear fusion.

Just like inside a nuclear reactor, atoms inside the sun’s core slam into each other every second. Most often, four hydrogen protons fuse together to create one helium atom. Along the way, a tiny bit of the mass in those four miniscule protons is “lost;” but since the universe conserves matter, it can’t just disappear. Rather, that mass gets converted into a dramatic amount of energy—every second, the sun radiates 3.9 x 1026 watts of power. (This is such a huge amount of energy that there is honestly no Earth-centered analogy. Perhaps that number can be contextualized like this: This amount of watts is far more than all of the electricity the entire world would use, at current rates, over several hundred thousand centuries.)

The efficiency of thermonuclear fusion is a major reason the sun has kept radiating heat for so long—the energy released by turning just one kilogram of hydrogen into helium is the same as burning 20,000 metric tons of coal. Because the sun is so massive, and relatively young, scientists estimate it has only used about half of its energy-producing hydrogen.

Eventually, the sun’s core will convert all of its hydrogen inside to helium and the star will die. But don’t sweat it. That won’t happen for about another 5 billion years.